Christmas time is the most wonderful time of the year (it’s true, there’s a song about it), so it seems like the last place you’d find someone butchering a sorority house or a family plagued by a hideous monster. But, what is it about Christmas that makes for such compulsive horror viewing? 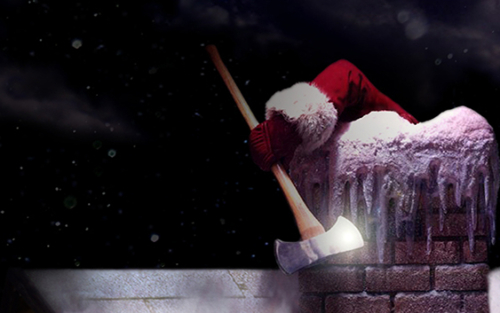 1972 heralded Silent Night, Deadly Night, a good old-fashioned slasher that just happens to take place on Christmas Eve. The film was popular during its release at drive-ins and was shown annually around Christmastime in the decades following. 1974 brought us Black Christmas (as did 2006 in the shape of its remake), which took our standard sorority house horror and set it around Christmas; taking the Michael Myers theme of getting home for the holidays, the killer wanted to be at his home for the holidays. 2015’s Krampus, based on the Austro-Bavarian folklore of a monstrous creature punishing misbehaving children, featured a family terrorised by Krampus for losing their Christmas spirit. The formula works: take a standard horror film, add tinsel and baubles, and release it at Christmas.

But, the horror film genre is no happy accident. Psychologically speaking, the filmmakers manipulate our subconscious to attach an emotion onto the film. The greater the emotional connection with the film, the deeper the film resonates and the more successful it is. Just look at The Notebook or Titanic. The difference with horror is that the emotion horror filmmakers are in the market of is fear.

Our evolution has allowed savvy filmmakers to tap into our deepest and darkest uncontrollable fears in order to exploit them and have us rapt, on the edge of our seats, and ready to scream at any moment. Take the innate fear of the dark – the fear that something is lurking and could jump out. Horror films go easy with their lighting budget to give us the necessary anticipation of what this something could be and send our spider-senses tingling as we wait for something to strike out from the shadows. Fear triggers our innate human survival instinct, whereas Christmastime is associated with happiness, good will, excitement, gifts, and a general warmth that tends to need light to be witnessed and displayed. That’s why it is so incongruous to us, and our innate selves, to have something horrific happen in the holiday season. When we see the darkness of a horror film, we know what to expect, but when we see the twinkly lights of a tree added to this, our minds are tricked. Nothing bad could possibly happen over Christmas, could it?

If our innate selves are being signaled by the film not to trust strangers, to beware of the dark and every bump in the night, the addition of the semiotics of Christmas further condition us to be wary at times we wouldn’t expect to need to be wary at. The incongruity of the symbolism of all things Christmas with the innate emotion of fear generated by horror films is something we simply aren’t used to, and will therefore strongly resonate with us. We expect to be murdered when we enter a haunted house, or when we call into a cabin in the middle of nowhere to use the phone, but we don’t expect murder to happen under the watchful eye of the angel atop of a Christmas tree. Maybe, in part, this is due to our gluttony for punishment. We enjoy the feelings horror films give us, we enjoy the relief that follows a fright. Maybe we enjoy taking the image of good old Saint Nick and gain equal satisfaction from turning him evil and giving new meaning to the phrase ‘he sees you when you’re sleeping’?