‘Exit Through the Gift Shop’ follows oddball French filmmaker and artist Thierry Guetta on his journey through the world of street art. He attempts to create an archive of street artists’ individual styles and aims to capture a history of their work as it happens.

On a technical level, this film was everything a documentary should be: honest; real, and; fair. It showed both sides of the underground art world. It featured artists’ opinions, cops’ disapproval and art critics’ thoughts about street art and its popularization. There were definite stylistic choices that made it an interesting watch, too. Clips ranged from old tape videos to newer SD card shots. The artists and cinematographers, Bansky and Mr. Brainwash, created an informative, dramatic and compelling film about the rise of subversive graffiti, street and pop art, and Guetta’s manipulation of it.

After an opening montage of artists “vandalizing” their respective cities, notorious and anonymous street artist Banksy explains how the film came to be and talks about Theirry Guetta’s modest beginnings. This scene — featuring the lighting, setting, and hooded creator — automatically catches the viewer’s attention. The interview was filmed in Banksy’s workshop with some of his most famous prints in the background. This, paired with the video montage, really introduces a style that remains consistent throughout the rest of the movie.

Banksy wasn’t the only street artist featured, though. The film contains exclusive footage and interviews with other street artists such as Invader and Shepard Fairey. It takes the viewer behind the scenes into the work that goes into each art piece. You learn so much about the thought processes of these artists – 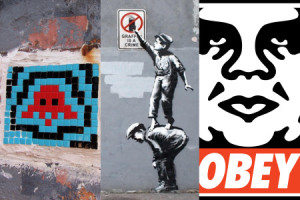 they have something to say about society and important issues. As an artist, it often takes so long to make your way into a formal gallery, but street art is a way around that construct. Even though street art, by nature, is temporary, these people realized that their creations were a form of expression that could be documented and viewed on a greater public stage, and this is documented in a fashion that is both honest and inspirational.

The film mixes suspense and intrigue with twists and turns that keep the viewer guessing. Right when you start to think that the film’s slowing down, it picks up again with a new fervor. Along with the film’s pace, putting the impact that street art has had on modern society aside, the most interesting thing in the movie was the unlikely evolution of Thierry Guetta. I won’t say much, so that if you’re interested in watching the film, nothing is spoiled, but Guetta’s transformation over the course of the film is unlike anything I’ve ever seen. As Banksy once said, “[Thierry Guetta] is a force of nature, he’s a phenomenon. And I don’t mean that in a good way.”

Because of all of this, the film leaves you with questions such as; how could someone like Thierry Guetta exist in such a way? And someone like Bansky? How do they finance their art? How often do these creative vandals encounter the police? How are their ideas so universal but so under-discussed? It begs you to learn more about street art and how it applies to you. It leaves you wanting more. Often, too, after watching a film like this, you develop strong opinions about social issues because it’s such a thought provoking feature.

I would recommend Exit Through the Gift Shop to anyone interested by insurgent art history in the United States of America and Europe. I would also recommend it to anyone who wants to learn something new about art in general. It features a fascinating side of society and interesting characters. It did leave a few open ends but not many — just enough to prompt the viewer to learn more about this topic. The film was honest, intriguing, and insightful. The creators treated it not only as a documentary but also as a work of art. The overall composition — its shot variation, style and the music choices — captured the viewer’s interest. For all of these reasons, I give the film a…