Matt Kennard’s transition from in front of the camera in a number of hugely popular and highly respected British productions to behind the camera as the screenwriter and director of World War I centenary short film Hymn of Hate was described in our review as “composed […] fantastically orchestrated [and] carefully handled”, “an effective tribute to the lost lives of World War I”.

This past week, we got the chance to sit down with the film’s creative driving force himself to discuss the inspirations and motivations behind making the movie, the casting of Russell Tovey and Thomas Turgoose, and the picture’s commentary on contemporary politics.

Here are the highlights…

Hymn of Hate takes its title from a nationalistic poem from World War I Germany. What inspired you to adapt the poem into a film of your own?

I’d done a tonne of research whilst writing about WW1 and it was actually when I’d finished the script and unimaginatively titled it ‘No Man’s Land’, that I came across the poem. It immediately resonated with me and it typified – and he (Lissauer) personified – the story I was telling and what I was trying to say. It was literally written to stir up a tribal hatred amongst the German population of the English. Full of hate and propaganda with lines like ‘We love as one. We hate as one’ and ‘We have one foe and one alone’. It was perfect and way more of an interesting title… so I nicked it!

In mainstream feature films, it’s not often we see the individual cost of a life during war time, especially not when that life is on the other side of the conflict. What was the creative motivation behind you doing this on Hymn of Hate?

I’d read several positive accounts of soldiers coming face-to-face with the enemy and there must’ve been hundreds of cases. There’s obviously the now famous football match between the Scottish and French soldiers versus some Germans that took place in No Man’s Land on Christmas Eve 1914. Sainsbury’s did that ad a few years back but there’s a cracking little film, Joyeux Noel, that depicts the truce beautifully. It’s so easy to fall into the ‘them and us’ mentality and that tribal good versus evil type thinking, but when it comes down to it, they were all just men, manipulated, encouraged and pushed on by other, more powerful, upper class men with selfish interests. I wanted to pose the question to the audience, could we have more in common with our perceived enemy than those we trust to give us our orders? In this case it’s a yes and May goes on a steep journey of realisation to get to that point. Evil isn’t always in the opposing uniform. 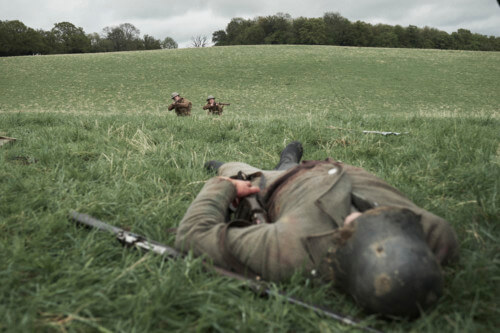 The movie raised the question of whether we have more in common with our enemies than with our superiors. Was this a purposeful commentary on current political events (Brexit, growth of nationalism, etc.), and if so which ones?

Yes it was, and all of the above I guess. The more I read about WW1, fully aware we were approaching the centenary of the end of the war, it struck me that we hadn’t really learnt anything or moved on much. Whether in a military sense or as a society, the devastating loss of life, particularly working class life, at the hands of an elite that lie, manipulate, oppress and constantly use hate-fuelled propaganda to encourage, to divide and to further their own selfish gain, is depressing. Whether it’s Brexit, the unprecedented levels of partisanship in American politics at the moment, the rise of Nationalism etc, it seems these wars and agendas fought for this anonymous elite by the people, that so devastatingly effect the mass population and cause these almost civil wars amongst us, the people, are exactly the things that distract us from asking more questions, looking past the ‘uniforms’ and collectively embracing our humanity and saying no more.

Did the picture look to subvert the notion/s of the poem and therefore the title of the film itself?

Yes exactly. May starts out the embodiment of the poem and ends up being the very definition of that subversion. I think that the naivety and humanity of Billy gives May just enough pause for thought when they meet Franz and the subsequent series of events helps May come to that realisation in one life-changing moment.

Russell Tovey and Thomas Turgoose are hugely recognisable British actors with a lot of talent. Would you be able to tell us a little bit about the process of getting them involved in the picture?

I was extremely lucky to get both of them. My wife is an actor and has worked with Russell over a couple of years on a TV show called ‘The Job Lot’. We’d met a handful of times, I’d just seen him be phenomenal in “Angels in America” at The National and thought sod it, just send it to him. I was applying for funding and thought his name would help too. He got back to me quickly and said he really liked it and he’d be up for doing it. I knew I wanted Tomo to play Billy and thought his and Russell’s contrasting performance styles would perfectly contradict each other on screen. He’s from my home town, Grimsby, and he too had worked on a film with my wife so I had two ‘ins’. I got my wife to send him the script and he too was very responsive. He’d wanted to work with Russell for a while and got Billy straight away. Andrew Knott is fantastic too – he and Russell are old pals. I was ridiculously lucky to have that cast on my first film. They were all absolute troopers and elevated the script tremendously.

The picture is very era-specific, with the costumes doing a lot to make it look authentic. Did you have a wardrobe department and what was the process in achieving the finished look of the soldiers?

Sarah Tapscott, who I’d worked with on a film I was acting in a few years back, kindly came on board and did costume design for me. She was completely unfazed by the request and budget, and had a guy in Torquay who she ordered everything from. We needed one shirt that could be destroyed but otherwise everything else was hired. I had a few trips to the IWM to make sure we had all the right accessories etc but Sarah and her assistant did a great job!

“I’m a big Terrence Malick fan and I was keen to use that dynamic movement and intensity he captured in The Thin Red Line and, like him, allow my actors room to shine.”

The picture itself was beautifully put together. I noticed it had a very strong war movie vibe, the sort of grainy look akin to a Saving Private Ryan. Were there any movies in particular that served as inspiration for the aesthetics on offer in your work?

Thanks. Ruth Wardell, our colourist, deserves a nod there. She put a chunk of work into getting that grainy texture and grey aesthetic to the picture. My Cinematographer had wanted to shoot on 16mm. I was a little uncomfortable taking on that extra load in my first go at making a film so we settled on some old Anamorphic lenses and then played around in post with that texture you see in the final film. I wanted a very simple two tone colour palette, to represent the black and white of film at the time but use modern colour techniques to represent the now. I was very much inspired by a few war films and for the really eagle-eyed there are a few nods in there too. I’m a big Terrence Malick fan and I was keen to use that dynamic movement and intensity he captured in The Thin Red Line and, like him, allow my actors room to shine. The sound design and score by Will Cohen and Joe Wilkinson at String and Tins was influenced by that film too. Wade’s deaths scene in SPR really inspired how I wanted the second half of the film to look and feel. 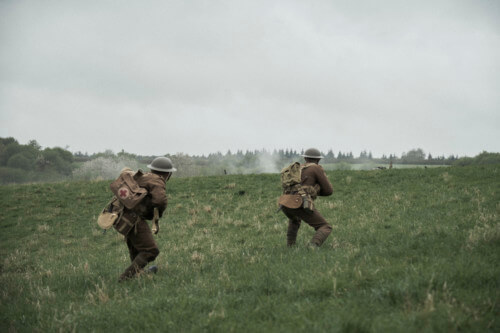 You’ve acted in a number of high profile British series – including major soaps ‘Coronation Street’ and ‘Hollyoaks’ to name a few – how did that experience benefit or hinder your experience on this film, your directorial debut?

I’ve been an actor for over 25 years so I’ve spent more time on set than the average virgin director. I’m obviously comfortable in the environment and over the years I’ve learnt what I like from a director and how I like to communicate, so I guess that all helps. I tried to be calm, polite and energetic throughout the shoot whilst making sure I was getting what I needed. It was strange though, making all the decisions and not being able to do my bit, and then disappearing for a few months on wrap.

This project is one you’ve written as well as directed. Had you always intended to get behind the camera when you were in front of it, or was this something that you grew to be fond of?

I started writing properly about six years ago. I’d never thought much about it until then and, although I always scraped by as an actor, I think maybe not getting the work I really wanted motivated me to start writing my own stuff. Directing had never been in my head, but when I wrote Hymn of Hate, I had a really clear vision for it and thought with it being only 10 pages (I’d not written a short before) it didn’t seem too overwhelming, so I decided to give it a go.

What was it that brought Mini Productions on board to produce the film, and how was your experience with them?

I’d produced a few bits and bobs before and had got the ball rolling with Hymn of Hate but there was so much to do and I wanted to make sure I didn’t spread myself too thin. A friend of mine, Martin Delaney, had written and directed a short film Queen’s Mile that Mini had helped to produce, and he recommended them to me. They read the script and were keen to get on board. For me, it was a no brainer. To this day I’m eternally grateful to all of them. I couldn’t have done it without them. April and Sara are two of the hardest working, positive, energetic people I’ve had the pleasure of working with and I hope to do it all again with them.

What’s next for Matt Kennard?

I’m writing a few TV series, two of which are close-ish to maybe getting made (we’ll see), and I’m writing a feature script about the arms trade. I plan to take an extract from it as a stand-alone short film and shoot it next Spring as a proof of concept. I also need to get an acting job to try and fund it all and pay my tax bill. Ha ha. Onwards and upwards!

Where can we find you?

I’m on Twitter and Instagram. I can never remember my handles but you’ll see something with my French bulldog or Hymn of Hate to be sure it’s me. I have festival updates and screening info there.

You can find our more about Hymn of Hate on the Mini Productions website and via imdb.