Tis the season to be Spooky, so for your delectation I decided to throw myself at the mercy of Amicus Productions’ first Portmanteau: Dr Terror’s House of Horrors.

I had actually been wanting to watch this movie for a while: I have a soft spot for British Horror – I’m particularly fond of the campy Hammer Productions, and I find the original ‘Wicker Man’ to be one of the eeriest films to have graced our screens, so; when I switched this movie on I was all ears. Even so, I made sure I was prepared to be horrified by either bone-chilling tales or by abominable film-making, both of which seem likely results in watching most Horror movies these days, whether the movies are old or new.

To the filmmakers’ credit, I had the most splendid time. 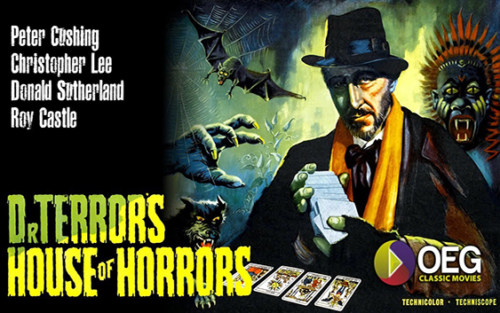 It was the first of a series of Portmanteaus – a movie comprised of short stories with an overarching plot. In this case the plot revolves around 5 ordinary passengers sharing a train compartment with the enigmatic Dr Schreck (which translates as ‘terror’ – something that Peter Cushing definitely invokes in this creepy performance despite the hilarious make-up). In turn he reads each of his fellow passengers’ fortunes with his tarot cards – his so called “House of Horrors” – thus, as each poor souls’ dreadful doom is slowly revealed, a short story is told to make up most of the film.

As the first of Amicus’s portmanteau’s, Dr Terror does an excellent job of ensuring a following series, as it impresses audiences with its display of spooky stories, which covers many fan favourite tropes and horror clichés. We start off with a rather frightening tale of an architect returning to his family home only to find himself fending off the curse of a werewolf destined to wreak revenge upon him. Not only does it boast some of the most genuinely frightening scares of the movie, but it’s all rather dashing with Neil McCallum running around in an open shirt as the persecuted architect. This is then followed by another straight-up horror that borders ever-so-slightly into the realm of sci-fi as, after returning from holiday, a lovely nuclear family find a rather pesky vine in the garden which is in danger of choking the hydrangea. It, of course, proves to be a hardy bugger which doesn’t take kindly to garden shears – dog lovers beware!

To my complete surprise, the movie then takes an outright comical turn in the third tale. Now taking suit of almost all 1960s British Horror Film, Dr Terror is overall a joyously camp romp and just a bit cheesy, but the fate of the third passenger is basically outright horror-comedy with pratfalls and all. A musician gets a gig in the West Indies, and upon discovering a Voodoo religious ceremony, makes notes on the frantic and amazing music. Despite several warnings regarding the jealous and quick-tempered nature of the Voodoo God, he arranges a performance in his London Club. On his tail is the said God, who doesn’t take kindly to his music being stolen. It’s probably the weakest in terms of actual horror, but it’s a great opportunity to see Roy Castle in his film debut, showing off his musical talents and being utterly silly.

Quickly we are shunned back into the darker stuff as Dr Terror this time reads the fortune of a thoroughly grumpy Christopher Lee, revealing the most shocking story of the bunch. The Horror Giant, Lee, plays an unbearably haughty and arrogant art critic who is taken down a peg or two by a practical joke delivered by Michael Gough – an artist whose work is often ripped to pieces by the critic. Being a man who prides himself on his keen intellect and the awe of his fans and underlings, Lee simply cannot take the humiliation and plans his revenge. The result is devastating: an artist who lives only for his work, is mutilated. At Gough’s demise, Lee is stalked and terrorised by a phantom disembodied hand until vengeance is wreaked upon him. Seriously, is there anything more you could ask for from a horror movie?

The final story features a baby-faced Donald Sutherland as a promising young doctor, bringing his lovely French bride back to his home in the States. This last one boasts mystery, romance and sensuality as the young doctor begins to have doubts about who his wife really is after an odd case of anaemia in the clinic (and an awkward finger-sucking scene).

At the end of all these predictions, the passengers find out why they are all destined for these terrible fortunes, and it all ends thoroughly miserably.

Dr Terror’s House of Horrors is such a modest little movie, but is an exquisite gem amongst the anthology of British Horror. Despite the fact that these stories are limited by them having such a short narrative, they still engage and captivate, and the cast is mostly to thank for that. It’s made up of a mixture of giants of British cinema, and promising newcomers, who all do a brilliant job of characterisation and emotion in such a small time-frame. Importantly, they don’t take themselves too seriously, with some very enjoyable tongue-in-cheek performances which don’t detract (well at least not too much) from the horror.

Amicus’ Portmanteaus were unique at the time when compared to its rivals. Obviously the narrative was like nothing else at the time, which of course has its pros and cons: some of the stories were inevitably duller than others, for example. Importantly however, as Hammer Horror (another pillar in British Horror) was slowly spiraling down into cheap gore and vulgarity, Amicus Productions were more sparing with their blood. This movie, for example, creates a terrible sense of dread by the subtlest touches in production; things that are all a source of terror in our subconscious. Odd noises, things moving in the shadows, something in the corner of your eye which can’t quite be explained, even uneasy conversations. The use of ominous sound, chaotic music, eerie visuals with spooky figures looming in the background all helps to keep you on edge, so when the actual few gory and shocking moments come along, you get a jolly good fright. I’ll admit it now, my Budgies having a sudden squabble gave me a little fright during the more tense moments.

Of course, it’s not going to hold a candle to modern slasher or even ghost movies in terms of scares, but Amicus’ debut in Portmanteau boasts greater character and charm. As I write this feature, I do feel tempted to give the movie another watch and I certainly want to check out its many successors. Dr Terror’s House of Horrors is a testament to the originality and quirkiness of British cinema and is as moreish as Trick or Treat sweeties.