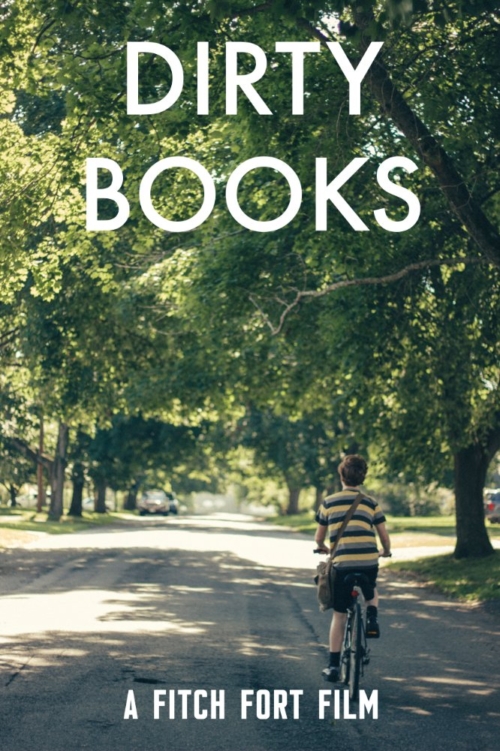 I can’t deny that I adore movies made by fellow film nerds (rather than “artistes“, sacre bleu,) because the resulting films end up with an infectious enthusiasm which radiates out of every frame. In its short 15 minute run, Dirty Books transported me to all the hip high school greats like Rushmore, Scott Pilgrim vs The World and Ferris Bueller’s Day Off, showcasing said infectiousness and bringing about those positive feelings I’ve long attached to such classics. It was a production that stood on the shoulders of giants, which was surprisingly clean cut in its own thoroughly modern setting.

David (Noah Bailey), the Editor-in-Chief of the Prichard Gazette of Prichard Hall High School, is aghast by the news that the paper is being axed to be replaced by a new blog. As a strong believer in the sanctity of the printed word, David is determined to show his principal, Dr Bradley (Timothy J. Cox), that his beloved paper is too big and too important to be stopped. The everyday business of an ordinary High School in an American suburb does, however, prove to be a bit too dull to pull in the readers, so David decides to take matters into his own hands by creating his own stories, which the entire school gobbles up. As his infamy grows, his friends and colleagues are left to answer whether David’s actions are for the good of the paper or for his own egotistical needs.

The thing I enjoyed most about this movie was its tongue-in-cheek melodrama – the whole affair is played out like a serious business-based drama set in an almost archetypal high school. David takes the replacement of the paper with a blog as an act of moral depravity and, as such, ball busts his oblivious staff. His dismissal of Sports Writer (Ansley Berg) Charlotte’s suggestion to go along with the blog is a surprising homage to the trope of the everyday sexism the working woman faces (‘don’t worry your pretty little head, doll’), as is David’s vigour in the rescue of the paper by dirtying his work through his reliance on his secret informer and his “journal”. This quirk shows an auspicious intelligence in the screenwriting of Ian Everhart and Zachary Lapierre, and also in the latter’s direction. Not only do they give the audience an enormous pay-off with the gorgeously satisfying ending, but they provide a legitimate redefinition of the High School genre for today’s teenagers.

The High School movie is one of the most important genres in Hollywood due to its influence-upon/connection-with the very profitable demographic of teenagers. They draw in teens like no other film because, speaking as someone who had a life-ending crisis every other day at school, it was always of some comfort to see glamorous and uber-attractive stars going through the same growing pains. With the likes of The Breakfast Club in the 80s, Clueless in the 90s, and Mean Girls in the 00s, the teen genre has proven to be very identifiable with its young target audiences and has arguably come to mould the film tastes of the young people watching them. Dirty Books manages to neatly include the popular themes of this genre, such as school reputation and fame, rebellion, humiliation and back-stabbing betrayal. It does this while defining itself as unique through Lapierre and Everhart’s stroke of genius to play out school life as a struggle in the business world, as it provides a delicious satire for a marginalised youth who need a voice more than ever in this day and age. Times are tough for young people, with education often being the victim of budget cuts (in one form or another) and a tougher job market awaiting them after graduation. In a “grown-up” world where you would likely have had to have solved world hunger to be selected for an unpaid internship, the picture felt relevant and most pleasing in this respect.

Evidently, Dirty Books has some amazing ideas. However, it did seem to fall flat at the execution. Anyone who reads the film’s summary will be most excited to see David’s creation of news stories and, with a proud history of American Teen movies to be inspired by, I was expecting some pretty innovative pranks. Thus, while the initial “Dirty Book” stunt was creative, the resulting mayhem was disappointingly mild. It is such a shame as well, for there is such an acute wit oozing out of the film. But, with the crux of the plot being based on these pranks, the entire film is let down, making it plain and relatively dull. In a way, there’s no excuse for this – watch any other High School movie and follow suit. Even real-life school has more juicy gems in it: a few famous pranks and rumours from my secondary school are unsuitable to print, for example. I understand why the pranks weren’t as gutsy as expected due to the aesthetics of the film and its desired target audience, as well as the fact that the movie was filmed in a real community in an actual High School; I imagine that upon getting the school’s permission to film, a few ground rules were probably laid down preventing anything too outrageous or inappropriate from happening in the movie. Still, it’s a pity as it robs Dirty Books from ever becoming truly compelling.

There were similar issues with the performance of the actors as well. From what I have seen in Dirty Books, it is clear that this young troupe have heaps of potential, as they all seem to relish the heightened drama of the piece. After a few more productions I can imagine they will have finally laid down some solid acting foundations. But, with a few exceptions, the performances were simply a display of actors who had learned their lines and worked out how to emote them without really being able to produce anything convincing. I strongly sense that this is just a teething stage for actors who, in the majority, are finding their feet, though Noah notably had great comic timing and his moment of inspiration for his Dirty Book prank elicited a satisfying giggle from myself. I personally look forward to his future performances.

What does save the movie is its remarkable production; this small little film on location in Massachusetts (partially in Lapierre’s hometown of Greenfield) looks very professional. The location filming probably lent itself to the final result – the bright sunny skies helped give that jolly aura of suburbia which is key to all High School movies. Also, the real location settings (the school, the suburban street, the convenience store) gave an authenticity to the film, almost as if you get a small peep at the actual goings on in the community. To top it all off, the soundtrack is killer! Using the fresh indie rock sounds of “Beach Toys”, “Jungle Green” and “Beware the Dangers of a Ghost Scorpion”, the movie sounds contemporary and projects the rebelliousness of the movie’s characters.

Dirty Books is, conclusively, a film made out of some sensational parts, showing real promise and maturity in all the film-makers involved. However, as good as these individual elements are, they fail to come together to make anything that could be considered outstanding. The movie could have been remarkable, and there is definite promise with director/writers Ian Everhart and Zachary Lapierre’s infectious wit, but its family-friendly approach and often by-the-numbers weaving of elements produced an underwhelming final result.

More information about Dirty Books can be found on imdb.