With a tagline, ‘the blonde leading the blonde’, Romy and Michele’s adventure road trip to their High School reunion (in Romy and Michele’s High School Reunion – 1997) suggests that mistakes will be made, regrets are to be had and the discovery that ignorance is bliss is a likely outcome. But, we all know and love Romy and Michele, the best friends with a dream of moving to LA and just having a great time; don’t we? We all know their downfall: thinking they need to pretend to be something other than themselves in order to ‘fit in’ with the rest of their old school friends. If they had to taken some advice from one Heather Mooney, who never really conformed to high school society and excelled in business but not in a colour scheme, things may have been slightly different for the best friend duo.

Heather Mooney, played to perfection by Janeane Garofalo, is aggressive, sarcastic, unable to express any feeling apart from anger or disgust, and is actually a success story compared to her school mates. She rose above the cliques and, in a way, the rejection she sufffered from Sandy Frink and became a businesswoman. Her invention of fast burning cigarettes for ‘the woman on the go’ stemmed from her frustration of never having enough time to smoke in between classes. Unfortunately, for reasons unknown, she was attracted to Sandy Frink who very obviously only had eyes for Michele. She held on to this rejection/attraction for years and in some ways she never evolved past the teenager dressed in black and heavy eyeliner because of this. The reunion gives her release and the chance of realization, even saying, upon seeing Frink again, ‘What the hell was I thinking’. Only then is she finally able to talk to her would be counterpart, Clarence, and enjoy yet another cigarette. 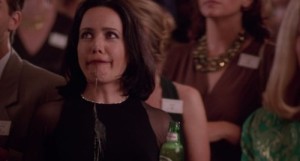 In spite of the smoking, Heather is a hero; she goes against the grain in the way she talks, dresses and behaves. She has not no concern for etiquette, as she is shown to gurgle beer when others are cheering mediocrity. She is brilliantly sarcastic and doesn’t feel the need to pretend to be anyone other than her foul-mouthed self. She is an outsider as shown by her willingness to trek to back buildings to have a moment to herself (just for that cigarette). Romy and Michele could have learned from her sooner, had they been friends.

The character, Heather, makes for a brilliant comparison to Romy and Michele. While they are positive, naïve and happy to help each other, Heather is constantly negative, rude and doesn’t really show allegiance to anyone else, not least a best friend in the ways that Romy and Michele do. But, like the titular blondes, she comes to realize her one big mistake and then opens herself up to new experiences like letting Romy and Michele suggest clothes for her to wear… even those in bright colours. In a way, she begins to shed her teenage angst and move on.