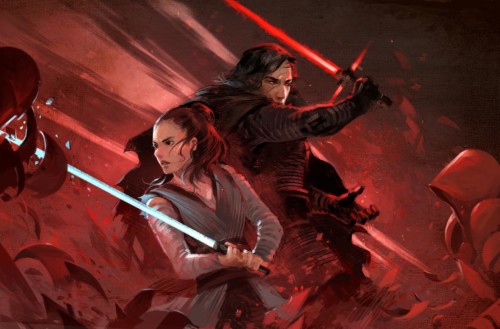 The debates about the Star Wars saga carry on as we build to the finale of the main nonology. /r/StarWarsLeaks had a post elaborating on George Lucas’ role (or lack thereof) in the Sequel Trilogy that brought out a lot of interesting discussion. The first comment that stood out came from /u/Angelmv86:

“This was great, but my main take away from this is this: How dare JJ, Arndt, KK, and Iger think that for even the slightest second that JJ and Arndt should write the script, or think they can make something on the level that Lucas has… that’s pure arrogance. That was a huge mistake because even in this article it states that lore about the whills, and connecting story beats for the overall 9 films were basically discarded for aesthetics and eye candy. So why even call it ep. 7-9!?! They just plan to not answer stuff and move forward anyways?

This is the main reason why I don’t think these films will age well. They are missing a crucial aspect of every Star Wars film (that even Rogue One has) that has come before it… George Lucas is a genius and people are even starting to see the prequels for what he was trying to make and not what it turned out to be and Disney thought they could 1 up him. That’s as fucked up as it is stupid…”

I think it’s a stretch to say that the films ignore important lore for the sake of visual cohesion.

Disregarding lore is how we ended up with the Prequel Trilogy (PT), and those films prove that George Lucas’ latest decisions had been far from genius. The whills (which are mentioned in the novelization of Star Wars (1977), drafts of the Revenge of the Sith script, and officially “introduced” in Rogue One) are barely understood beings (though that isn’t confirmed) related to the Force that aren’t exactly integral to the story being told across I-IX. Either way, they’ve been explored more by Disney than Lucas ever did. Lucas’ focus in exploring the Force moved away from mystical, cosmic answers, and this is highlighted in a comment by /u/madamz:

“I dunno man, it said Lucas wanted to focus more on midichlorians and the microbiological aspect of the Star Wars universe which was like the number one thing that people hated when Phantom Menace came out, so I can’t say I really blame them for veering away from his ideas…”

“[Introducing midi-chlorians] was one of the clearest examples of the prequel trilogy violating one of the most fundamental aspects of story telling. That being to show, don’t tell. The force functioned as a story telling device, and every depiction of it prior to the prequels depicted it in the same mythical fantasy light the original trilogy treated it as. Retroactively declaring “Oh no its actually magic space bacteria that live in your blood and can be measured by a blood test like your cholesterol” doesn’t add anything to the story or expand the lore in any meaningful way, it just dispels one of the things that made the force so interesting in the first place.”

Commenters were quick to jump on the technically incorrect description of midi-chlorians, which are not “magic space bacteria”.

To paraphrase Qui-Gon Jinn, midi-chlorians are microscopic symbiotic life forms that exist in all living cells in the Star Wars universe. They are the reason life exists, and are voices in a Jedi’s head that allow them to utilize the Force. The Force is essentially a form of biological magic, and midi-chlorian count correlates with Force/Jedi power level (as we see with Anakin and Yoda). The reclassification becomes semi-contradictory with Obi-Wan’s presentation of the Force in Star Wars (1977): “Well, the Force is what gives a Jedi his power. It’s an energy field created by all living things. It surrounds us and penetrates us. It binds the galaxy together.” It is also a direct contradiction to the novelization, where Obi-Wan says that scientists have yet to properly explain it. If there was knowledge of a living organism that was vital to the power of the Force, I think it stands to reason that Obi-Wan or Yoda would mention it at some point, especially when Luke is going to be the last of the Jedi. This is just a symptom of larger issues TPM brought into the Star Wars universe when it comes to Jedi that, in my opinion, were somewhat corrected in the Sequel Trilogy.

“For over a thousand generations the Jedi Knights were the guardians of peace and justice in the Old Republic. Before the dark times, before the Empire.” – Obi-Wan

While the Jedi Order existed in some capacity prior to the PT, the clues from the OT paint a different picture than the one that now exists. When creating the Jedi, Lucas took inspiration from the samurai and knights of old. Those orders were made up of networks of nobles that ultimately served and protected the feudal system ruled by a central figure (shogun or king). Samurai and knights were generally literate, able to marry, and were heavily associated with the religious philosophies of their region. The main difference between Jedi and their analogues is that the Jedi were devoted to the Republic rather than an imperial or monarchical system.

Obi-Wan exclusively refers to the order as “the Jedi Knights”, and uses the words “guardian” and “warrior” to describe members. While some Jedi were scientists (via the 1977 Star Wars novelization) or pilots, these roles are not distinguished from any warrior sects or obligations (such as the Clone Wars), though it should be noted that they were passive, discouraged from attacking. The Jedi were part of an ancient religion, one that wasn’t respected amongst the Imperial aristocrats, and the Masters were simply those that had the greatest control of their mind. The lack of official organization is fascinating; it gives an impression of wandering warrior-monks that can be used for any variety of disputes.

The PT shows the Jedi as a weird pseudo-Catholic order. Head to the Wookiepedia page for the Jedi Order and you’ll see the insane divisions the PT opened the doors to. First of all, there’s now a Grand Master that is the official head of all the Jedi, and that shouldn’t be confused with the Master of the Order (the elected leader of the Jedi High Council). Each Jedi holds a rank, one of Youngling, Padawan, Knight or Master. A Youngling is ordinarily under the age of nine, and Padawans advance to the rank of Knight through the Jedi Trials. The Jedi High Council grants rank from their own authority, as seen in Revenge of the Sith, and rules over the three Councils of First Knowledge, Reassignment and Reconciliation. There’s also the Agricultural Corps, Exploration Corps, Medical Corps, the Private Jed-eye (Jedi Investigators), Jedi Seekers, Jedi Temple Guardians, and the Technical division. Jedi Temples exist on many different planets, though the main one is on Coruscant. Jedi aren’t allowed to marry or have personal relationships, can only have one Padawan at a time, and are forbidden from having emotions at all.

The PT tries to verbally change the role of Jedi in society, but doesn’t really succeed. Qui-Gon tells Queen Amidala that he can only protect her and cannot fight a war for her. He then proceeds to help coordinate her war and fight alongside her. Mace Windu says that the Jedi are keepers of the peace, not soldiers. Obi-Wan’s language, the Jedi action in the films and the real world origins show otherwise. Jedi are defined by the lightsaber they carry, an elegant weapon that requires mastery in order to wield properly. On a semantic level, what differentiates “peacekeeper” from “soldier”? Soldiers aren’t defined by whether they attack or defend, they are the individuals that serve in combat. The Jedi Knights would absolutely serve militarily to defend the Republic… that’s literally the first definition Obi-Wan uses, and the most obvious assumption when comparing Jedi with real knights or samurai.

How did any of this improve on what existed before? The teachings of the Jedi in Star Wars (1977), Empire and Jedi are about staying away from negative emotions and using space stoicism to harness the power of the Force. The bureaucratic nature is nowhere near as cool as the Jedi portrayed in the OT, and the empty protestations by Jedi characters contrast with what the films show. While I acknowledge the influence of Extended Universe material, the fleshing out of the Jedi Order within the film canon is a huge cause for the change in expectations of generations of Star Wars fans. I think the films could have been more interesting had the Jedi not become the near-equivalent of a sovereign state unto themselves.

The great thing about the ST is that they were able to sidestep the establishment of a new Jedi Order by placing it in the past. Luke and twelve students, including Ben Solo, trained in a secret location. Luke contemplated killing Ben because he felt the conflict and potential evil in Ben, and when Ben awoke to Luke’s lightsaber in his face, he broke bad. Ben joined the Knights of Ren, a group of dark side Force users, and became their leader. He and the Knights slaughtered or recruited the remaining Jedi trainees, destroying the temple and the organized Jedi like his grandfather before him.

This is all from moments in The Force Awakens and The Last Jedi, and their corresponding visual dictionaries. They establish what happened without dwelling in the minutiae, and the results are films with clearer focus on their protagonists and the themes of the story. It allows for the story to occur on a smaller scale like in the OT. Rey doesn’t need to know each Jedi’s individual office and rank within the Order, or the biological origins of the Force – she needs to learn about the energy, the nature, the balance, and how to connect with those aspects of the Force. The Jedi training in TLJ is beautifully shot and acted, carrying on at a steady pace. The PT barely features any training at all. There’s simplicity in the master-apprentice relationship, and its circumstances set the stage for future stories of individuals (like the kid at the end of TLJ) seeking out masters like Luke to learn in more dynamic settings. The strictures and structure of the Order is way too limiting.

Jedi weren’t meant to be uptight priests cooped up in a building chatting about microbiology and training children – they were meant to be samurai warriors that uphold the positive ideals of the galaxy. They should live on different worlds where they settle disputes, repel conflict; only embarking on noble adventure as it finds them. The ST sets up the Jedi to serve the role defined in the OT, and I can’t say I’ll miss the PT conception of the Order. Sometimes it is best to let the past die, and to let go of the feelings associated with what once-was.

Or… maybe Disney doesn’t care about any of this and is going to roll out stories of Youngling Qui-Gon learning how to take blood samples for midi-chlorians counts and cramming for the Jedi OWLs. Either way, I like what JJ and Rian have done with the worldbuilding and themes in their respective films, and I hope their Star Wars ethos carries on to future creators.