“Once upon a time, or maybe twice, there was an unearthly paradise called Pepperland. 80,000 leagues beneath the sea it lay, or lie. I’m not too sure.” Thus begins the psychedelic extravaganza of The Beatles’ eye-popping animated feature, “Yellow Submarine” (1968).Without trying to sound pretentious, I have loved The Beatles since I was a wee bairn: we had VHS copies of two of their movies – “A Hard Day’s Night” and “Help”, both of which are packed with laughs, toe-tapping hit songs and oozing with the Fab Four’s wry charm and wit. These are movies that are enjoyed by all ages. My young and dumb mind that was easily influenced by what was on the gogglebox, thought that the band was a current thing so it was quite a shock when my Mam revealed that John had died, and had been dead for many years. Since seeing these movies, I have been a life-long fan of their work, so when I was having an aimless browse in HMV I instantly snatched up a copy of the newly remastered version of Yellow Submarine when my eyes wandered upon it. 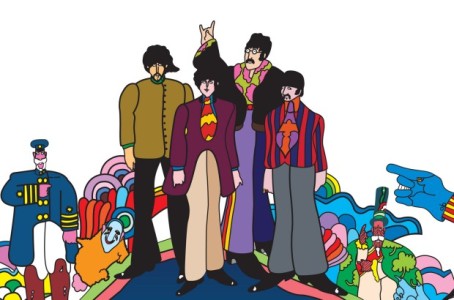 Among all of the band’s film productions it is unusual that it does not actually star The Beatles themselves, but used voice actors, with John, Paul, George and Ringo only having a brief cameo at the end – it had very little input from them at all. This may all seem very disappointing to a fan of the group, but do not despair because obviously it was their song “Yellow Submarine”, distinguished by Ringo Starr’s instantly recognisable Liverpudlian twang, that inspired the wacky story; its stuffed with several of their hits; and at its heart has all the ideals “The Beatles” stand for: peace, love and MUSIC! The psychedelic dreamscape is very much in keeping with the art, music (particularly that of The Beatles) and feeling at the time. Its full of bright colours, trippy landscapes and creatures, and all with a dash of mysticism. The characterisations of the cartoon versions of the Fab Four are also spot on and the voices, although not perfect impersonations, do embody the core personalities of John, Paul, George and Ringo: John’s sharp sarcasm; Paul’s foppish and boyish quirks; George’s hard to amuse, down to earth patter, and; Ringo’s…. Ringoness. So rest assured, this is a true Beatles movie and is a gem of 1960s pop culture.

The plot devised by Lee Minoff starts in the beautiful fantastical land of Pepperland, full of laughter love and music. It is invaded by the Blue Meanies, who hate music and take delight in destroying beauty and other’s happiness. Pepperland represents all things regarded as positive in the 60s with statues of the words YES and KNOW strewn across the land –symbols of the cultural revolution that was at full pelt in the 1960s, sexual liberation, the break-down of class barriers via the pursuit of knowledge etc. The Blue Meanies are of course the personification of negativity (albeit a comical depiction): “WE MEANIES ONLY TAKE NO FOR AN ANSWER!!”, they cry as they destroy all the positive monuments of Pepperland e.g. turning KNOW into NO. Most of the civilians are bonked into “blueness” and their world turns grey, a single survivor escpaes via the eponymous yellow submarine to go get help. The submarine lands in Liverpool and employs the help of The Beatles, who after many adventures in several weird and wonderful lands come to the aid of Pepperland. They end up liberating the people of their blueness via their music and help the Meanies to blossom into their buried positivity and love.

The plot is indeed a whimsical story, but is actually a minor part in the appeal of the movie. The film is outstanding via the basics of sound and vision. Each song featured in the soundtrack is an absolute tune (that’s true for most of The Beatles’ songs) but also controls the mood of the scenes as seen in the almost poignant Liverpool sequence in which “Eleanor Rigby” casts the city in a stark depressing light in a shocking contrast to the bright and joyous Pepperland. “When I’m 64” is oh so cleverly used as the submarine passes through the sea of time; this could have been incredibly contrived but the unique use of numbers by the animators makes for a very enjoyable scene – I personally found it to be quite hypnotic. And nothing can be more joyous and rapturous than the proclamations of “All You Need is Love” as the inhabitants of Pepperland are freed of their blueness and are brought back to life by the wonderful sound of music (also I really love this song and it truly embodies the attitude of the 60s in which hatred, and all discords can be overcome by simple pure love). Another great moment was the use of the childlike and simplistic ditty “All Together Now” at the end of the movie at which time the phrase is shown on-screen in 27 different languages, reaffirming the ideals of the film – peace and love – that were a part of the social revolution of the time which moved towards a break-down of social barriers in an attempt to achieve universal harmony.

Now, I cannot write a celebration of this film without mentioning the animation, and especially its total uniqueness and it’s massively reaching effect throughout pop culture and the arts. Yellow Submarine was an innovation of traditional animation that mixed pop art, shimmer and crazy rotoscoping effects. Each scene introduces a different style, with all of them bar the Liverpool sequence bursting with bright colours, shimmers and strobes. I will admit, after certain viewings my eyes were aching from watching all of those punctuating colours and shimmer effects, so you have been warned. Furthermore, some techniques were so inventive and new, they were rarely used by other productions: “they couldn’t handle the trippy goodness man”. Other than the general scenery, the animators had an incredible eye for detail during characterisation: Ringo walked at less paces a minute than the other three for in real life he is shorter than John, Paul and George. Their walks were dominated by key quirks of the fab four’s personality with John strutting along as a true performer; Ringo dragging along like the schoolboy; Paul like a lordly gentleman, and; George shuffling along like the cool kid we all wanted to be.

Talking about animation techniques does not give the animators enough credit – it has percolated far into all animation that it preceded. Firstly, it would be hard to watch the Eleanor Rigby sequence without thinking of “Monty Python’s Flying Circus”; it seems perfectly plausible that a certain young Mr Gilliam got a few ideas upon viewing the movie. Also, its trippy landscapes have been parodied in several dreamscapes and drug trips of many different productions since. The fact that the animation was weird and wacky, and not so sickly sweet and benign, made it accessible to adults (for the first time in a very long time), too. This opened the floodgates for a host of smart and funny animations aimed at adults including South Park, Family Guy, Futurama and The Simpsons. Yellow Submarine popularised and somewhat normalised the idea of producing animation directed at adults.

And finally, it is simply a very funny film – making children and adults alike laugh. It’s full of one-liners you would expect to be ad-libbed from the Fab Four themselves (which is not surprising as apparently most of the final script was developed on the spot). Such gems include: “Maybe time’s gone on strike.” “What for?” “Shorter Hours”; “Look! It’s a school of whale!” “They look a little bit old for school” “University then”; “Liverpool can be a lonely place on a Saturday night, and this is only Thursday morning.”

There is only so much I can talk about this movie as really, the only way to get any idea of the experience is to simply watch it, and believe me now I have only scratched the surface in this revisit. So go forth and do so, I assure you it is a treat, but maybe bring some sunglasses.