The quirky camera style in The Grand Budapest Hotel provides a bridge to the characters and the world they live in. Narrative theorist David Bordwell describes Anderson’s work as ‘planimetric’; providing striking visuals for the audience. An overview of planimetric framing describes a frontal presentation of the action, characters facing the camera – think the police line-up in The Usual Suspects. 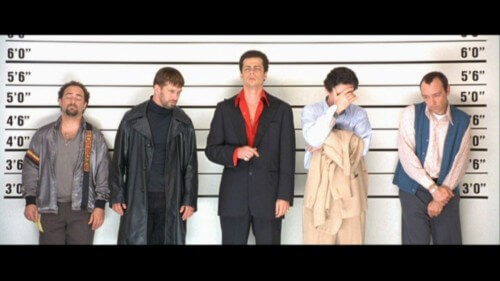 A telling example of this can be seen in the breakfast scene between Gustave and Madame D. The background is perpendicular, characters will be placed at 90 or 180 degrees, as seen below: 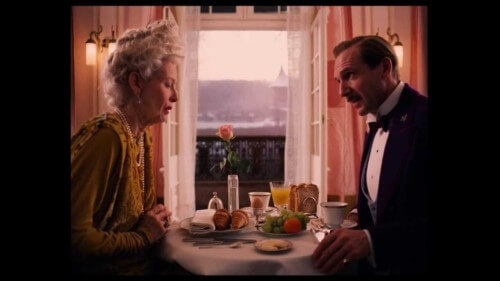 A postmodern technique that is as simple as it is effective, take a freeze frame at any point during The Grand Budapest Hotel and it almost always replicates a staged formal photograph, with the lens acting as an oppressive force, reinforcing said theme in the world of the film. The train sequence captures this tension:

GUSTAVE: “There are still faint glimmers of civilisation left in this barbaric slaughterhouse that was once known as humanity. Indeed, that’s what we provide in our own modest, humble, insignificant… Oh, fuck it.”

The dichotomy of peace and war and binary opposition of his civilised yet barbarous language fits in with the dehumanising wide shots and almost robotically precise camera movement throughout. This planimetric style is the first of five reasons why I love The Grand Budapest Hotel and why I believe this film cements its director as one of the great film auteurs of this era.

2) The relationship between realism and the surreal.

“The particular brand of artificiality that I like to use is an old-fashioned one.”

Quoted from The New York Times, Anderson was referring to his use of model animation over the more commonly used CGI.

“It’s liberating to acknowledge that both look fake.”

The Grand Budapest Hotel requires the audience in every sense to be willing to suspend their ideas of what is believable. The moat full of crocodiles outside the prison springs to mind, especially within the alpine setting in which the film is placed.

Access the special features on the DVD and you will find a cake recipe which appears as an added extra, challenging further the audience’s perception of reality; does the recipe suggest to the audience that the cakes used in the film are not film props? The cakes could be considered symbolic of society, as the prison guards ensure the cakes are not destroyed. Still following? The Grand Budapest Hotel might just be the film for you. 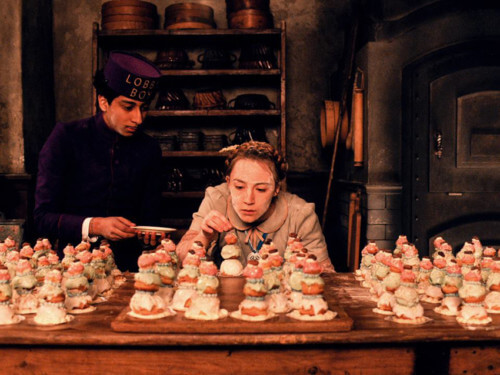 The climax of the film offers a final comment on realism when Zero talks about Gustave: “I think his world had vanished long before he ever entered it – but, I will say: he certainly sustained the illusion with a marvellous grace!” A possible comment on the way our personalities are defined by our perceptions of the world around us.

Comprising of a nested narrative we go back in time with the characters in steps, starting with the girl in the cemetery, then the author as an elderly man and then a young man. It gives an almost circular narrative as we explore the cemetery again at the end of the film. The narrative can be told through frames. The painting ‘Boy with Apple’, and its ‘framing’ of the ‘second copy of the second will’, revealed to be a crucial element of the plot. Window frames are used often to frame the characters almost creating an Inception-like feel of worlds within worlds and stories within stories. 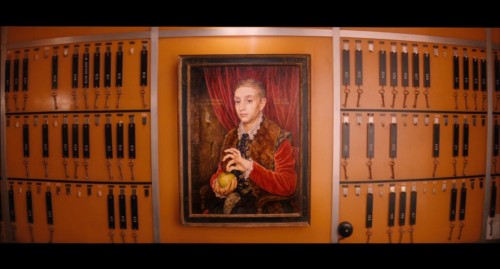 Repetition is also used to create comedy: the sequence of punches that take place during the reading of the will, the lobby boy being instructed to ‘take over’ in the Society of the Crossed Keys montage sequence, and the question ‘Are you Monsieur Gustave…’ on his way to the monastery, are all key examples.

4) The Balance of Light and Dark

There are many references to death within The Grand Budapest Hotel but the overall richness and appeal of the film comes from the contrast between light and dark.

The opposition between the gothic architecture when the will is read and pink and blue interior of the escape vehicle of Mendl’s delivery van is used with great comedic effect. 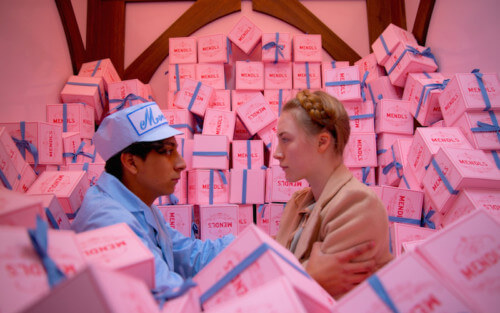 The film was rated 15 for ‘strong language, sexual references and brief gore’. Whilst violence is shown, it is wholly suggestive. The personal story of Gustave is presented as a back drop to war, which makes our heroes’ quest seem more universal, yet smaller in comparison to the war raging on the continent and therefore also more personal. Zero sees the newspaper article with the headline ‘WILL THERE BE WAR? Tanks at Border’ before zooming into a second headline on the paper: ‘Dowager Countess Found Dead in Boudoir.’ The personal connection to the Countess is more relevant to Zero than the threat of war, hence the comedy.

To some degree it can be argued that Anderson explores the dominant western ideology of capitalism. Zero eventually prevails as the hero rescuing a private business from state control. The hotel embodies a magical element; it is almost sacred with self-dimming lights and its own brotherhood, The Society of the Crossed Keys. Religion is not on the agenda, even the monks who help save Gustave and Zero are displayed as less than holy with Serge’s murder. In the opening of the skiing sequence, Zero knocks a statue of the Virgin Mary off a sledge and it shatters as it hits the ground; a metaphoric fall from grace for the church. As a spectacle, the animated motorbike and sled chase down the ski run is a particular highlight of the film as it incorporates high-speed action, danger and a literal cliff-hangar.

The Grand Budapest Hotel is a film I love more and more each time I watch it; a truly unique spectacle and a special place to stay.