It’s that time of year again. The nights are getting darker, the cobwebs are creeping in and we’re rifling through our cupboards for something to wear this Halloween. Sometimes it’s hard to think of something new and original without getting caught in the modern onslaught of Jokers and Harley Quinns, Black Swans and the occasional Minion (seriously, when is that ever a good decision?). So, if you’re stuck for some inspiration, take a look at the following characters and costumes that may give you some ideas… 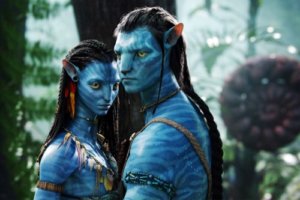 James Cameron’s Na’vi first filled our screens in 2009 and, courtesy of their their striped, blue skin, have been kind of hard to forget. With such a unique costume, you’ll definitely stand out in a crowd! There are 4 more films set to arrive in the next 7-8 years, too. But please spare a thought for those who will have to clean your blue body paint off every surface for weeks to come! (Trust me, I speak from experience…) 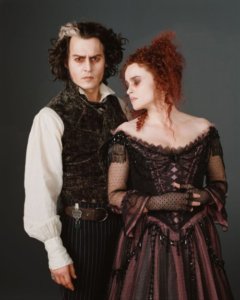 How can you go wrong with these outfits? Tim Burton’s gothic take on the theatrical duo, set in Victorian London, is complete with gory side-effects and people pie. Todd is clad in the classic white shirt, waistcoat and notable hairstyle (bloodstains optional) but Helena Bonham Carter steals the show with her range of corsets, lace and full length skirts. A perfect idea for a couple’s costume, you’ll be sure to make a fabulously grizzly impression.

In one of the most iconic looks in film, Audrey Hepburn dazzles in this simple yet elegant, lengthy, black dress. Adorned with long black gloves, pearls, and of course a tiara, Hepburn’s look has become a timeless classic and would definitely be a graceful addition to any costume party.

4. Jack Skellington and Sally – The Nightmare Before Christmas 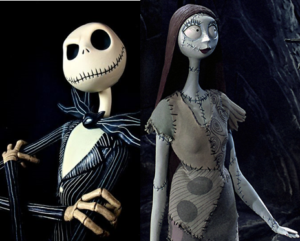 Another Tim Burton movie to feature on this list, and perhaps one for the more adventurous makeup artists out there. Both creepy and quirky, Jack and Sally have great costumes which aren’t too commonly seen around town on your average Halloween. And bonus? You could probably recycle the costumes and wear them at Christmas, too.

Another elegant addition, the green dress Kiera Knightley rocked in the 2007 movie ‘Atonement’ was voted ‘Best Costume of All Time’ by Sky Movies and readers of ‘In Style’, so it’s not a surprise that it’s an excellent choice for any costume event. Slightly deviating from the classic style of the 1930’s, this bold colour choice, not often seen in films, has made its mark and definitely sticks in our memories. 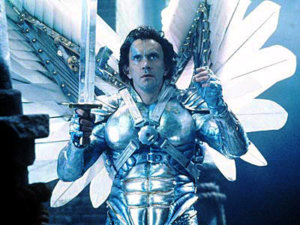 Perhaps less commonly known than some of the other films present on this list, this is one movie costume that, once you’ve seen it, it’s hard to forget. The lead character sports some fetching silver armour and a pair of wings in a daydream, and it’s perfect for surprising a film fan or two no matter where you may be heading this Halloween. Perhaps not the easiest costume for us to undertake ourselves this year, but armed with some feathers and a roll of tinfoil, what could possibly go wrong?! 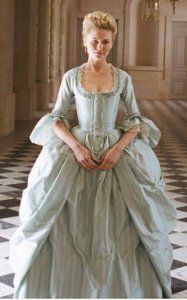 With an enhanced take on the Rococo style, ‘Marie Antoinette’ is not short on amazing costumes. This film is an explosion of pastels, ruffles, bows, ribbons and big hair! There’s a dedication to complex costumes and it certainly paid off, with the film winning an Oscar for ‘Best Achievement in Costume Design’ in 2007. Perhaps this won’t be so easy to replicate, but if you can get somewhere close, you’re bound to impress. 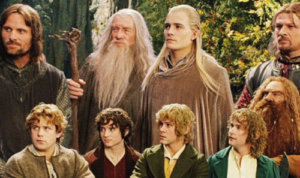 Whether you’re a Dwarf, an Elf or a hairy-footed Hobbit, this trilogy has something for everyone! With ‘The Fellowship of the Ring’ being nominated, and ‘The Return of the King’ winning an Oscar for its great costume design, it’s no surprise it’s a great go-to for any costume event. From Galadriel’s gowns to Elrond’s armour, from the Witch King to Aragorn, these movies demonstrate excellent detail and unique costumes, So, whether you pick one for yourself or make it a group theme, how could you possibly go wrong?

9. The Mad Hatter – Alice in Wonderland 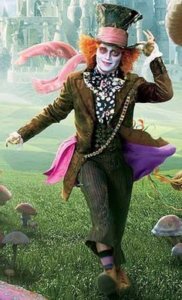 Johnny Depp’s Mad Hatter costume is an explosion of colour, fabric and detail. This quirky interpretation definitely leaves an impression and shows an attention to detail, from his ever-changing cotton socks, to the price tag in his hat, to the Hatter’s pin cushion ring. A fun costume to undertake, a trip to a local charity shop might be the best way to tackle this mix of materials. 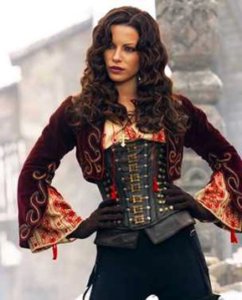 Based originally on the book by Bram Stoker, these characters are definitely more in line with the traditional Halloween costumes that we know and love. This gothic fantasy is filled with great costumes but Kate Beckinsale’s character definitely stands out. With a more refined look than that of Dracula’s brides, Anna shows us that a leading female can look amazing and dress practically all at once! With a loose blouse, corset and stylish jacket, Anna is the perfect choice to inspire us this Halloween.

Inspired? Let us know in the comments!

Sophie Grant
Currently a psychology student with a crazy range of interests. I'm a massive book lover and I'm always overjoyed (and terrified) when I find out one of my favourites is about to hit the big screen. I won't lie, I'm horribly picky when it comes to book to film adaptions. But hey, you'll learn to love it!