For almost 100 years we have been hiding behind sofas, peeking over popcorn boxes and scaring ourselves silly with horror films. We leave our local cinemas frightened, disgusted and sometimes even disturbed, but we love it!

Because a horror film is like a rollercoaster. You sit through minutes of suspense as you climb to the top of ‘scare mountain’, then the immense drop of a jump-scare hurtles us into an adrenaline rush. We take the rollercoaster over and over again because we love the rush that it gives us, even though we exit the rollercoaster also feeling frightened, disgusted and disturbed. It is commonplace for us to be so mindful of ourselves and the reality of our position in the world is often overlooked. Both rollercoasters and horror films envision this reality for us, and make us contemplate our fragility. The simulation of death on-screen, and on a tiny, only-just-passes-safety-regulations cart racing at up to 100mph, only encourages this intense feeling; making us feel vulnerable yet incredibly omnipotent.

So now it’s 2018, and we still aren’t over this rollercoaster feeling. You’d have thought that we would be at the point where nothing scares us anymore in a horror film. We’ve seen everything – blood, guts, ghosts, demons, the end of the world, projectile vomiting over helpless priests. What else is there to scare us? Apparently plenty. Contemporary horror films are still offering scares by the dozen, and they don’t show any signs of stopping. But what is it that makes them continue to tick and why are we still running from the cinema screaming? 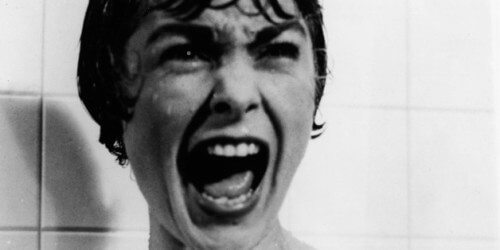 In any horror film, it’s likely that you will see similarities to other films. Filmmakers take ideas from here and there to expand upon their own. Go on, try and think of a horror film that is nothing like any you’ve seen before. It’s difficult, but I reckon some recent horror films may fit this bill. If we think about horror films through the ages, you’ll see common themes and trends throughout, even if they were released 50 years apart. For example, The Invasion of the Body Snatchers (1956) could be closely compared to The Purge franchise (2013-). Groups of people becoming emotionless and devoid of humanity, living through an epidemic of mass hysteria. Sound the same? They’re very close. Another common theme which is still seen in horror films is the “I-think-I-know-who-the-killer-is”, but it turns out, you’re always wrong. Well, you’re sometimes wrong. Psycho, Scream, The Thing, Seven; these classic films have you trying to guess who the antagonist is, only to prove you mistaken. This happened to me when I saw The Secret of Marrowbone at the cinema. I won’t hand out spoilers, but let’s just say I was wide off the mark about my verdict! I think the biggest theme of contemporary horror is the psychological aspect. We don’t get scared by a man in a mask anymore – it’s actually more likely that we’ll just turn that into a meme. What scares us seems to be the unknown, yet somehow it’s the known too. We’re scared of things we can’t see or explain – ghosts, spirits, possession – yet we’re also scared of the things we know transforming into something less familiar and/or instinctual. We’re scared of the human condition and what we could become, and especially what could defeat us, kill us, end our species. Split, for example, presents the expansion of the human mind to extreme lengths and that is unnatural to us. The increasing prominence of technology has become a fear for many, and filmmakers in the genre like to use this to their advantage too. The Blair Witch Project, Paranormal Activity and Unfriended are films that take on the ‘found footage style’ of horror. Unfriended in particular takes on the fear of someone watching our every move through our devices. But, considering society’s current thoughts and knowledge on this subject, is that such an irrational fear?

Compared to 60s and 70s ‘slasher’ horror, most of the horror films we see now are psychological horrors. They mess with our minds and have us asking questions we never thought we’d be asking. We’re so used to knowing who the antagonists of a horror film are and their motives for their actions, so when we’re faced with an invisible force, we simply don’t know what to think. If we look back on horror films and relate them to Western society at that time of their releases, it’s actually very easy to see why the villains scared us so much. The ‘man in a mask’ theme is easy to understand – we were fighting men in masks, men in uniform, men following orders, people dressed up as something they were not usually seen as being. Nazi Germany in World War II and Russia during the Cold War are two big examples. Whereas now, we are fighting an enemy without a face; the group known as the ‘Islamic State’. As it has been shown in national and international news, many members of this group have been civilians, people we walk past on the street everyday and don’t bat an eyelid at. It’s becoming increasingly popular to remind us that we can’t trust people, not even one another. Even something so simple as saying ‘hello’ to a stranger is almost completely unheard of now; the result of our lives being bound to technology and every warning we’ve ever been given from society regarding the dangers of such an act. Our enemies are each other and in being so, they are unknown. The scariest antagonists in contemporary horror films usually take on roles similar to real-life villains; the creepy online predator, the dark figure following you down an alleyway at night, the isolated neighbour who keeps to themselves and is actually a psychopath… It’s natural for us to assume that the invisible antagonist in a horror film is a ghost, and that’s how their actions are portrayed, but it sometimes turns out to be a living person, deranged and manipulative, in a psychotic state. The Boy, for example, leads us to believe that we are watching a ghost story, when in fact it is the story of a man with a traumatic childhood. These villains and antagonists only fuel the fire we have against each other. It makes us more judgmental, more unfair, and more likely to point the finger and put the blame on one another. In this case, the real question we must ponder, is: are horror films scaring us or scaremongering us?