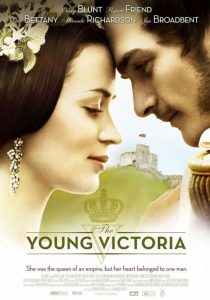 The Young Victoria (2009)
Director: Jean-Marc Vallèe
Cast: Emily Blunt, Rupert Friend, Miranda Richardson, Paul Bettany, Mark Strong, Thomas Kretschmann
Plot: Set in 1800s England, the film explores the story of young Queen Victoria from the years immediately before her coronation, through her ascension to the throne at the very young age of 18 and her marriage to Albert. Her uncle King Leopold I of Belgium arranges the match with his young nephew Prince Albert of Saxe-Coburg Gotha. What starts off as an arranged engagement, blossoms into a true love story.

The Young Victoria is an adaptation of Great Britain’s 19th Century monarch Queen Victoria’s early life as written by the awarding winning screenwriter Julian Fellowes. It focuses on Victoria’s personality and her struggles as the very young Queen of Britain and it is an interesting insight into Victoria’s relationship with her beloved husband Prince Albert – which was never really developed before. Since a much anticipated TV-series is due to be out later in 2016 and will cover roughly the same time-span – starring Jenna Coleman as the young Queen – I thought it would be interesting to re-watch this gem and ponder how the TV adaptation will compare to it.

The Young Victoria is based on true events and was deeply researched by Fellowes. Although some scenes are pure fantasy or have been changed –  like the assassination attempt for instance, which actually took place, but not in the way it is shown in the film – all in all,  it can be considered an interesting and fresh adaptation based on Victoria’s early years as a Queen, especially because the film manages to show the vulnerable and human side of both Victoria and Albert –  something that can be, and is often, easily overlooked when it comes to monarchs and emperors.

The cast was talented and masterfully chosen, I couldn’t think of anyone better than Emily Blunt as Victoria and Rupert Friend as Prince Albert: the two have amazing on-screen chemistry and I believe that is of the up-most importance in a film that tells the story of how their affection grew through the years and turned to love in time. I was also delighted to see so many British actors that I knew like Paul Bettany, who portrayed Lord Melbourne the Whig Prime Minister and Victoria’s trusted adviser, and Miranda Richardson who played Victoria’s mother the Duchess of Kent. I can’t help but mention Thomas Kretschmann, who was fit for the role of King Leopold I of Belgium.

I particularly appreciated the setting of the film, since it was shot at different estates across Britain and it is pervaded with the atmosphere of the English landscape. The cinematography was, generally, masterly. The pivotal scene of the coronation is featured twice in the film. The first time it takes the form of a flash forward, where the camera focuses on the details of the coronation ceremony: the robe, the crown, the audience gathered to attend the event and finally the focus shifts on Victoria’s face with a close-up showing her concern and fear. The camera then quite tellingly zooms on her mother’s face, and with a graphical match cut we are introduced to the next shot and taken back in time to tell us how the story will unfold leading up to the coronation. Victoria’s relationship with her mother is presented throughout as being a bit strained and although it is unclear if that was the case in real life, it is nevertheless known that some rough moments between the two of them actually happened – and they are shown in the film. It would have been interesting to see more of their dialogues and interactions, as they were quite non-existent. On the other hand, I found the development of Victoria and Albert’s relationship particularly intriguing. It seemed that Albert supported and helped Victoria through her reign – at least up until his death in 1861 – and the two ruled together and confronted each other with their ideas, ultimately making British people’s lives better and introducing new reforms in different and important fields. All of this comes across very well in the film. I must admit I didn’t know that before watching this film; I just assumed Victoria made every decision and ruled alone as the Queen, but I now know that, quite surely, Albert did have a great impact on her life and decisions. I was a particular fan of their interactions in the movie, especially their witty comebacks and the reality of their relationship as it was portrayed by the two leads; the characters had a lot in common, but they also disagreed and argued about life and making the right choices. This made the whole story relatable and I found that this is an element hardly conveyed in period drama films of this kind. Even so, their time on screen was limited – most of the time at least – as they mostly exchanged letters. This was because the movie wanted to ensure anticipation for the moment when they finally decided to marry. I must say that I would have loved to see more of them ruling together, but the screenwriter chose to explore a different angle to the story and his collaboration with the director Jean-Marc Vallèe and his crew succeeded in recreating the atmosphere, the colourful interiors of the palaces and of period clothes – with their bright hues –  thus giving us an unforgettable portrayal of two central figures in British and European history. We’ll see if the TV-series will measure up to such a task.

I really enjoy period films in general but this one has always been one of my favourites. Nevertheless, I think it was way too short. As a film that deals with political unrest and changes during Victoria’s reign, I feel like it didn’t develop the matter as closely and deeply as it should have, especially when considering a non-British audience that would be without all the precise knowledge of that period of history of Britain. I also didn’t appreciate the establishing shot during one of Albert and Victoria’s dialogues that was very out of place and therefore gave the impression of the movie having a ‘lazy’ or ‘messy’ side that the rest of the picture seemed absent of. I feel like the picture would have seemed more balanced if we were presented with more of Albert’s life too: we only see some shots of Leopold’s palace in Belgium and Albert’s actual home. This is, however, understandable as the focus and interest regarding the story would clearly be on the iconic figure Victoria became and thus much of the focus of the story was centred on her.

Again, we’ll see if the TV-series will measure up to such a task.