Since 2013, The Conjuring Universe has been a huge part of contemporary horror. This year (2018), from the minds of James Wan and Gary Dauberman came The Nun, the fifth instalment in the franchise and a spin-off of The Conjuring 2 (2016). 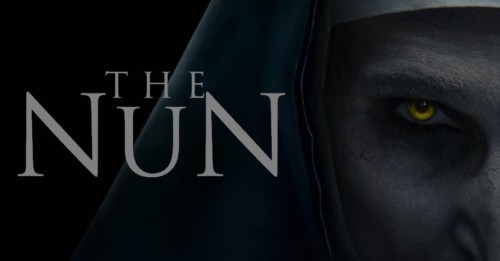 As a huge fan of horror movies, especially The Conjuring Universe, there was no way I was going to miss this gothic horror directed by Corin Hardy.

With the previous films proving to be both scary and entertaining, I had high hopes for this one, and my cinema experiences of the Conjuring films have always left me feeling pumped with adrenaline. Unfortunately, The Nun left me feeling disappointed. There I was thinking that New Line could squeeze out perhaps two more films for the Universe, but I think The Nun may have proven that it might be time to put the franchise to bed.

The Nun is set in 1952 Romania, so chronologically it is the first film in the Conjuring Universe.

After witnessing the attack of two nuns at the Cârța Monastery in the opening scene, we get a sense of what this film will entail. One of the main characters, Frenchie (Jonas Bloquet), is then introduced when he discovers the body of one of the nuns, quite horrifically. The Vatican learns of the incident and sends Father Burke (Demián Bichir) and Sister Irene (Taissa Farmiga) to Rome to investigate the situation. We learn that Sister Irene is still in her novitiate, and has not yet taken her vows, but her Mother Superior implies that this is something she has been chosen to do. Later, Sister Irene reveals that she had visions of a nun as a child and thus became interested in the Church. Burke, on the other hand, is haunted by the death of a young boy he exorcised and failed to save. From then on, they discover the secrets of the Monastery and the reason for Sister Irene’s presence. No spoilers I’m afraid, though I will tell you that Frenchie (of all people) ends up being the link between The Nun and The Conjuring. Who’d have seen this coming ahead of time?

So far, The Nun has received very mixed reviews. After its release on September 7th, it has received an average rating of 4.5/10 on Rotten Tomatoes with critics saying, “The Nun boasts strong performances, spooky atmospherics, and a couple of decent set-pieces, but its sins include inconsistent logic, and narrative slackness”. This critical response contradicts the numbers at the box office, as we see that so far (as of 29th September 2018) the film has made $309million worldwide against a production budget of a relatively small $22 million. Clearly, the anticipation of The Nun’s release was much greater than its delivery. This made me consider the strengths and weaknesses of the film, and what this means for the future of The Conjuring Universe.

As other critics have said, the main strength of this film is the strong performances from Farmiga, Bichir and Bloquet. I was excited to see Taissa Farmiga’s performance especially after watching her in ‘American Horror Story’ and knowing her as the sister of The Conjuring’s Vera Farmiga. As expected, she gave a chilling performance as Sister Irene, and her mannerisms matched Vera Farmiga’s an uncanny amount

The music by Abel Korzeniowski creates a chilling, eerie atmosphere throughout, and I also enjoyed how they kept the famous and creepy “ooooo” sounds from The Conjuring films (or ‘the Valak noise’ as I like to call it) that is played whenever the nun appears. This gets me every time, but it’s such a simple scare.

Another thing I absolutely love about this film, which I have also noticed in The Conjuring and Insidious, is the skilful direction and cinematography. Our characters are followed into a room or around the room by the camera, so we as viewers can only see what they see; we see their surroundings, we follow their eyes and get scared as they would. We feel their fear like we are there with them. Director Corin Hardy and cinematographer Maxime Alexandre, in conjunction with highly influential producer James Wan, have clearly shown how to hook an audience. I felt at many points like I was in the Monastery itself.

I wish I didn’t have to talk about the negatives of this film, because I wanted so much for it to be brilliant and have no faults whatsoever. But sadly, it did disappoint me.

In previous Conjuring films, I have found fun and fear in the stories and always felt that they flowed well, not to mention made sense. With The Nun, things were all over the place, like they were clutching at straws to keep it going. And, although the acting was great, the characters were not. Frenchie, for example, was pathetic. He worked as a bit of eye candy who rescued the fair maiden come the end of the film, but offered little else.

The Nun didn’t pay enough attention to detail or logic and relied heavily on jump scares. Even with regard to those, the best ones were in the trailer and were pretty tame when compared to the rest of the franchise, so the element of surprise had disappeared.

I also wanted a bit more clarity about the link between this film and The Conjuring. Obviously things are made clear by the film’s end but there are loose ends that don’t quite fit, such as the fate of Sister Irene. I thought she was a young Lorraine Warren? In the second half of the film she took her vows, so did she then change her name and leave the Church? Or are they two different people who are connected through Valak? These are just a few of the questions that fans around the world have been left asking themselves, perhaps purposefully with further spin-offs and universe entries intended by the studio, but any movie that has you searching the “trivia” page on imdb in order to understand it in its entirety is simply not doing its job.

Ever since the release of The Conjuring in 2013, I have been a huge fan of James Wan and the Conjuring Universe he has helped to forge. He has taken the worlds of the living and the dead and created great modern horror movies that not only have you hiding behind the sofa holding a crucifix at arm’s length, but also manage to make you feel something in a more sincere way. The Nun was a turning point, making for the first time since this Universe started that I have not felt that way. The cinematic experience made it more entertaining than it actually was; the story was lacking and I left the cinema with more questions than when I entered (and not in a good way!) Based on this film, I’d rather we didn’t get another, and I think that all of this negative feedback should be a red light for the Conjuring Universe, no matter how much money it may have made.