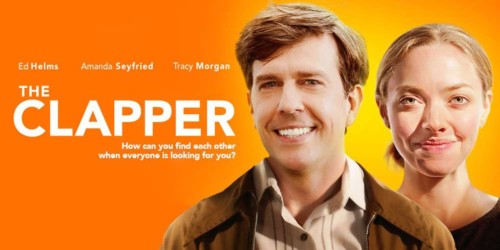 Screenwriter-director Dito Montiel (Fighting – 2009; Man Down – 2015) has adapted his own novel of the same name for a 2018 self-described romantic comedy that is absent of comedy and almost totally void of romance; The Clapper has to be a top choice for any list of worst films of 2018 so far.

If the problematic age and attractiveness gap between Ed Helms and his romantic interest Amanda Seyfried wasn’t enough of an issue for a film of this decade to overcome, then the screenplay certainly was. The Clapper is the type of movie where things just happen, often without explanation and seemingly with little or no motivation, and while it would be easy to criticise the absurdity of the central narrative of Helms’ character as an infomercial extra becoming a viral sensation courtesy of a fictional hit talk show, it is actually the romantic aspect of the movie which suffers most as a result of this approach. At no point is the central relationship made to be believable, and the presentation of Helms’ Eddie Krumble as a “weird romantic” – his character’s actual dialogue at a moment of self-analysis – is less cute and more creepy, with the 40 something year old man winning over the 20 something year old woman of his dreams by simply turning up to her work every day and following her to diners on her lunch breaks. Montiel, in his screenplay and his direction, gives little to no explanation for how such a usually worrying choice of activity could win over such a beautiful woman other than Seyfried’s character Judy being, as Krumble said to her: “weird like me”. It appears that the most basic of Manic Pixie Dream Girls is at play here, and does pose the question of: why Seyfried? Why?

The biggest disservice such a clear and distinct lack of a socially conscious or even remotely realistic narrative does to the movie itself, is take away the positive that is Seyfried’s performance, which is by far the best in the movie despite the actress having much less to work with than her co-stars; each of whom seem absent for vast periods, offering only the bare minimum of what is expected of them at any given time.

The Clapper is, essentially, like an overly long TV pilot for a comedy that has zero laughs and even less going on under the surface, with an awkwardly high amount of celebrity cameos only working to reinforce this feeling upon their every wedged-in appearance that has seemingly been constructed only to convince investors and distributors to risk cash on this garbage fire of a movie.

There are no saving graces here. This is bad. This is so bad it might even be offensive. Don’t watch it.