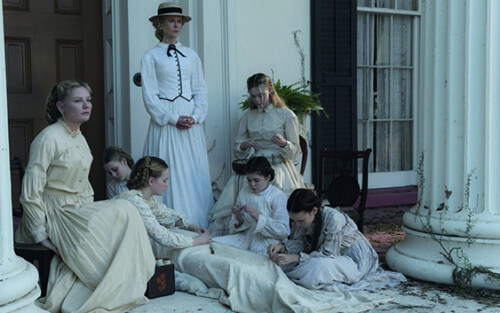 Sofia Coppola, the woman behind The Virgin Suicides, Lost in Translation and Marie Antoinette, returns to the director’s chair for the latest of her female-centred pieces, this time boldly retelling the 1971 Clint Eastwood film ‘The Beguiled’.

The Beguiled classically told of a Union soldier taken in by a Confederate girls’ school during the American civil war, only to make them turn on each other and then eventually him. In using this as a template for her own version of the story, Coppola was able to work against audience expectations and subvert the original’s premise, telling the tale from the perspective of the female characters, a technique that allowed the filmmaker to develop a tense and atmospheric thriller that was devoid of the original’s exploitative nature and thus completely her own; a film that truly shone courtesy of the visual workings of herself and cinematographer Philippe Le Sourd (The Grandmaster – 2013; Seven Pounds – 2008).

This version of the film is instantly grabbing, with the opening shots being designed and photographed as if civil war period paintings, and the revisiting of these shots throughout the film acting as reinforcement of the changes in perspective that the characters (and indeed ourselves) are experiencing as this staunch and intimate thriller unfolds. Coppola’s insistence upon reusing shots that contained little to no movement, and purposefully sticking with them for inordinately long periods without cutting, helped to ramp up tension after brief moments of revelation and encouraged her audience to process the changes that had taken place and the mystery that had been unravelled in the moments that had passed since her original presentation of such scenes, admirably using this technique to also encourage a reevaluation of the original film and its central story arc, as was the purpose of this remake.

Coppola’s fierce dedication to a slower pace was as inviting as it was artistic and brought about moments whereby the other elements of the film could truly shine. One such an element was the film’s fantastic use of sound which worked terrifically to build tension, playing the thuds of distant gunfire as a continued warning of the dangers to come, yet never creeping too obviously into a scene as to remove the severity of the action. The balance in this respect was as finely maintained as were the aesthetics, and its under the radar presence enhanced the impact of the movie’s central actors, each of whom brought their own dynamic ranges to the overall story.

The standout performer in The Beguiled was Nicole Kidman whose repressive “head of the house” leader character was performed in an as finely tuned way as any performance you’re likely to see this year. She was at once assertive and incredibly vulnerable, and while she of course owes much of the success of this characterisation to the screenplay, Kidman’s understated performance was filled with nuances and her own special brand of having something behind the eyes that made her stand out head and shoulders above her colleagues, each of whom performed admirably in their own right.

Kidman’s largest on-screen counterpart was chief antagonist Colin Farrell, whose undeniable smirky charm created a questionable aura around his character from his very first moment of consciousness. Fantastically cast, given his history as somewhat of an unwieldy and eccentric hollywood star, Farrell’s performance was as much about what the actor already brought to the film as it was about his performance in it, though the elements of performance which he did produce never failed to hit standards below that of good, continuing the star’s run of solid performances in independent films.

The movie’s true on-screen emotional anchor was Kirsten Dunst however. The actress, who had played central roles in a lot of Coppola’s work before this film, was pivotal to understanding the group destruction that was occurring at the hand of Farrell’s Corporal McBurney as it was through her character Edwina that much of the group dynamic between the female characters was founded and developed upon throughout the movie, an element of the screenplay integral to all versions of the story and played out with a particular sense of realism here. Edwina’s innocent lust for romance and escape was characterised with a visibly dejected performance that presented as if internally defeated. This was both identifiable and worth routing for. In fact, if the film was to rest on the shoulders of any of the performances, this would certainly be the one.

The group dynamic achieved and then dismantled within the movie was made possible and heightened by the film’s incredible focus that dictated there be only eight characters and three locations – the school, its gardens and the nearby woodland. This specific and narrow focus made the backdrop of the civil war nothing more than background noise, whereas it had been regularly visited via dream sequences/flashbacks in the original, a factor that further enhanced the feelings of this film being told via the point of view of the females involved as opposed to the male, as their existence was largely removed from the violence and threat of the war in ways that Farrell’s character was notably always attached to via the injury the group nursed him for. Irregular visits from members of the army were presented with a distance that reduced their relevance to the overall story, often being framed as small and distant objects or removed from the screen altogether. It was only through their potential threat as war-ridden males looking for sex and their brief moments of threat to Corporal McBurney’s comfortable existence that their presence formed a sense of impact, for Coppola was determined to ensure that the central thriller played out between the female group and their male visitor, offering very little time to outside forces.

This decision to close-off the film in a number of ways did have the drawback of making cuts between scenes – especially those used to tell advances in time – force interluding shots that felt completely out of place on several occasions. In many respects, these notable fillers removed some of the impact of the overall visual journey presented by Coppola, and felt almost too modern and eccentric for the slow editing and set framing of the piece. Furthermore, Coppola’s overall fierce dedication to such a slow pace only emphasised how much each of these shots felt like they’d been cut into the final edit at the last possible moment, irregularly disrupting the momentum of the overall journey.

A similar criticism relating to the movie’s style is the way in which the film may be placed outside the gaze of the intended audiences that its more fun and camp promotional material had seemed to target. For a film advertised as featuring blood, murder and a combination of other horror elements, there was very little of each, and while this worked in favour of the film’s more serious tone and only enhanced the more bloody, murderous and horrific moments of the picture, there may be a number of disappointed film-goers who had expected a very different movie.

Conclusively, despite its drawbacks The Beguiled remains an artistic exploit the likes of which should be celebrated not only for its artistic achievements but also for its political motives. This film is very much about women as individuals and a collective, and puts a focus on their stories that is completely natural and encapsulated by an utterly enthralling mystery-thriller that plays just as well having known the story in advance. With a small collection of good performances, some of which could be outside choices for the Oscars this year (Kidman and Dunst), and some of the most beautiful and atmospheric photography in Coppola’s revered filmography, The Beguiled is a must-watch for fans of the director’s work and independent cinema, especially those with a taste for more traditionally European stylistic sensibilities, but it is certainly not the violent and rumpus affair that its predecessor was or its promotional material would lead you to believe that it is. In making this film, Coppola became only the second woman to ever win the Best Director award at Cannes, and upon first viewing it is clear to see why. Whether the film will stand the test of time or be revered after repeat viewings remains to be seen.