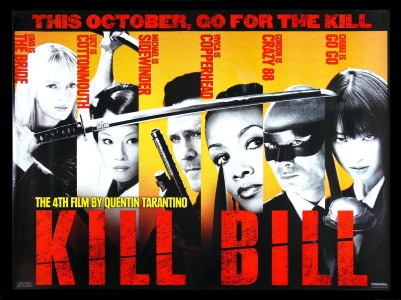 Tarantino has made some fantastic films – Pulp Fiction is one of my all-time favourites – but my favourite Tarantino movie has to be Kill Bill: Vol 1 & 2, because who doesn’t love a good “roaring rampage of revenge”?

While films such as Pulp Fiction are brilliant, showing us the glamorous lifestyles of California gangsters like Marsellus Wallace and his wife Mia, John Travolta and Samuel L Jackson as Vincent and Jules (who play off each other perfectly), and enough gunshots, fake blood and swearing to make it quintessentially Tarantino, Kill Bill is just… something else.

I think it is fair to assume that most of us aren’t trained assassins spending our working lives jetting off across the world and being paid vast amounts of money to kill people. That said, Kill Bill is still very relatable in that it deals with emotions almost every single person is familiar with; the feeling of betrayal and the desire for revenge, both on the part of Beatrix and of Bill too. Admittedly, most of us deal with it in ways that don’t involve going on multi-continental killing sprees and leave a slightly smaller trail of destruction behind us than Beatrix and Bill do, but nonetheless we can all still relate to betrayal and revenge in some way. 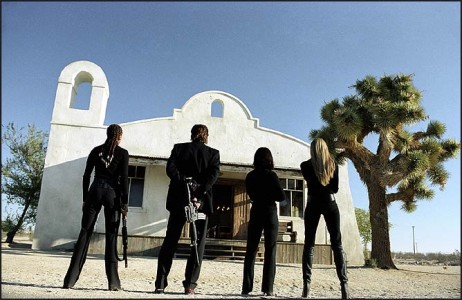 Along with Kill Bill’s relatable themes. it also has some stunning locations and setting. From Pai Mei’s hangout in rural China and the snowy garden scene where Beatrix dispatches O-Ren Ishii, to Bill’s Mexican beach house, both films are beautiful. They also have what is, in my opinion, one of the best soundtracks of any film. While it is not a completely original soundtrack with every song written specifically for the film, every single piece of music fits perfectly in my opinion. 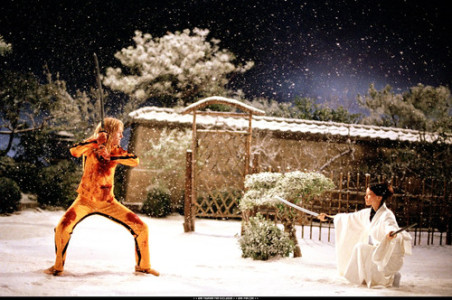 But what does it for me, aside from the scenery and the soundtrack, is that these two films feature one of the most kick-ass female ensembles of any film I’ve ever seen, if not the most kick-ass female ensemble I’ve ever seen. While the film centres on Beatrix’s quest for revenge, killing almost everyone in her path to Bill, it is the female characters that carry this film so high, from protagonist Beatrix Kiddo, to the Deadly Viper Assassination Squad’s female contingent: Vernita Green; O-Ren Ishii and Elle Driver; and O-Ren’s bodyguard Gogo Yubar – these are strong female characters. With the exception of O-Ren, we don’t find out tragic back stories that have lead them to become ruthless killers, and we don’t need these stories anyway! They are not poor hard-done-to girls who have snapped and turned on normal life. they are trained assassins and skilled warriors. We know Beatrix is on her “roaring rampage of revenge” but we know little else about her life previous to the massacre at the Two Pines Wedding Chapel, only that she was Bill’s lover and student and other little bits that are revealed as the story goes on.

One thing we do know about Beatrix however, is that she is such an amazing skilled fighter that she single-handededly disposed of O-Ren’s entire personal army, The Crazy 88, before going on to kill Gogo and O-Ren herself, and if that is not proof of a kick-ass female character I don’t know what is. Accompanied by the evil Elle Driver, the driven O-ren Ishii, the fiercely protective Vernia Green, the somewhat psychotic Gogo Yubari, and even the devious Sofie Fatale, these woman are a force to be reckoned with, and if they were to be on the same side they would likely be unstoppable.