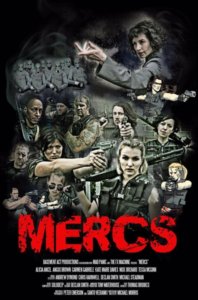 MERCS is a short film that, despite an obviously passionate and hard-working cast and crew, suffers from the oh-so typical problem of being an idea too large and grandiose for its budget and its run-time.

Primarily an action film, MERCS tells the story of a group of mercenaries engaging in one last mission, though quite what the mission is and why we should care for the characters (who are killed off at a swift pace) is completely lost in the opening fifteen minutes whereby all of the movie’s backstory is presented in a rather uninteresting collection of expository dialogue exchanges. This ambiguity is unfortunately only compounded as the film grows, leaving otherwise emotional moments of betrayal, loss and honourable death feeling completely void of the emotional connection so much of the score is working towards making you feel.

It is clear that the film’s director Michael Morris took a lot of inspiration from comic books, with the colouration of the picture being of clear tribute to this courtesy of its washed out greys juxtaposing the Power-Rangers-esque colour scheme of the movie’s heroes; something that was, at first, tough to get used to. Unfortunately, like much of the film, this was something you had to work out for yourself as the film progressed, with the opening sequences being entirely devoid of any obvious comic book connection, instead focusing on mismatched title cards and rather uninteresting character introductions that provided very little information regarding the picture’s protagonists. It was only as the film introduced characters of different nationalities that the comic book inspiration became prevalent, using the classic comic book text bubble as a translator during their exchanges with fellow characters. This was an impressively different means of handling such a scenario and was one of the movie’s most obviously creative decisions alongside animator Thomas Waterhouse’s hugely impressive cartoon animation that was used to tell the progression of the story when the budget was simply not large enough to show in live-action (such as an exploding grenade taking out a bunch of villainous henchmen). In many ways, given the scope of the project, the picture may have been better conceived in this style of comic book animation form, for the graphics were truly admirable both in terms of their look and their use, and thus could have been an excellent way to distinguish the film from others of its ilk.

Like many projects that are consigned to approximate budgets of £5,000, MERCS tried to fit in too many characters and was left feeling absent of any true characterisation or development. The initial team consisted of at least 6 people, each of whom was given their own moment in the spotlight in the heat of battle with little reason to care for any of them. Then, to compound the issue, the movie’s conclusion was followed by an after credits scene that worked only to expand the number of characters. This was, of course, in keeping with the film’s comic book movie inspirations, but watered down an already diluted cast of characters and worked to remove many of the picture’s remaining strands of clarity via one final underdeveloped story strand.

One character that stood out both in terms of their narrative involvement and overall presentation was the villain Morgana Mendell. Despite her introduction being let down by poor sound, the character held a gravitas that much of the rest of the cast didn’t. Credit has to go to performer Tessa McGinn in this respect as she took over each of her scenes courtesy of a quality of performance and high level of charisma that was sadly missing from much of the rest of the movie. The work on her hair, make-up and wardrobe also assisted in this respect, with the blacks of her clothing and hair working to set her apart from the colourful group of mercenary heroes.

Perhaps the largest takeaways from MERCS are the lack of clarity, both in terms of a general understanding of what’s going on in the film and the overall meaning behind the picture in general, and the technical aspects which, despite impressive work on the wardrobe, animation and the score, are lacking in terms of what the filmmakers are aiming to achieve. The latter can be summed up by poorly rendered CG blood and a number of sound issues that make parts of the film difficult to comprehend, while the former is simply the result of a filmmaker’s assumptions that his audience can understand the story in the same way that he can, which is not the case.

MERCS (2017) is, conclusively, an admirable attempt at an idea way too large for its budget and skill sets. The wardrobe and score are good, some of the acting is very good, the animation is great, but the project was simply too big and demanding of too much of a financial investment to truly be realised. There is some real talent underlying this movie, but MERCS could have done with being reined in from the character and set-piece heavy film that it has ultimately become, as for this reason it is a picture lacking in true emotional investment, spectacle or awe.

MERCS is a passion project from producer/screenwriter/director Michael Morris and cost around £5,000 to make. You can support MERCS and those who have worked on the project at the following social media channels:
Twitter: @MERCSMOVIE
Facebook: MERCSMOVIE

For more information about the film, visit their imdb page.