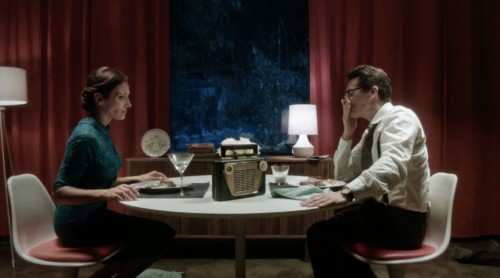 Hurricane begins by piecing together the time-period of its setting, working against the typical convention of simply introducing the visual and audible clues all at once to instead present each element one at a time, not settling on an establishing shot until the characters’ wardrobes, the sets and most obviously the sound, have been presented as individual beats to the story in the movie’s grabbing opening moments. Within about a dozen shots, a transportation to cold-war United States, with communist anxieties at an all time high and the threat of nuclear annihilation prominent in the minds of the country’s inhabitants, has occurred, with central characters Eva and Oslo sitting down for dinner to begin the film’s real-time exploration of these themes via the potential of the couple having a hacked radio. Is someone listening in on their every word?

It’s a simple yet well delivered premise that hits every story-beat along the way, managing to heighten tensions within the movie’s universe (set entirely in the couple’s dining room) with every development in the narrative, only failing to land perfectly in the film’s centre-most point of tension which was far too short – though budgets and time constraints should of course be taken into account with respect to this. Such a structure of course demands an extra level of performance from the cast than would usually be expected of short films, a task that Lisa Roumain and Corey Page particularly drive home with great effect, delivering Dias’ intellectual and witty dialogue with a sinister edge that works to quickly present their character traits while remaining somewhat natural, being loyal to the film’s dark comedy and creating a sense of intrigue regarding what’s to come. In a supporting role, it is Roumain who truly shines with a performance that is somewhat melodramatic per the premise of the film and its genres, but is filled with nuances that create a believable character of whom you want to experience more of the journey with. In a film with three very good performances, it is Roumain’s outstanding portrayal of the leading female that is most enticing.

Criticism of this short film is tough to find as many aspects of Dias’ project far exceed expectations, but a note must be made of the movie’s presentation of sound which seems somewhat lacklustre in comparison to many of its other elements. At many points throughout the movie, the audio through which the dialogue is presented is switched between audio with background noise and audio without background noise, creating an unwelcome distraction from the picture’s enticing premise and overall quality, even going so far as to nullify the excellent choices in score. A further criticism would be with regard to the movie’s overall delivery, as the filmmakers themselves have described the movie as being a dark comedy, yet upon watching the film, the picture feels much more like a tense mystery/thriller with darkly humourous aspects, leaving the intentions of the filmmakers feeling somewhat clouded in comparison to the clarity and quality of the picture’s overall delivery.

Conclusively, Hurricane is a very well made short film from a filmmaker with a clear talent for what he is doing. This movie is modern America trapped in the context of historical America, with growing tensions regarding foreign relations and an increasing paranoia towards ‘the other’ being key themes that are played out with tremendous success in a production that is a success in most aspects. With some talented performers portraying interesting characters and well-written dialogue, this should be a short film that many want-to-be filmmakers check out before embarking on their own journey; a film of great quality.

You can find more information on this movie via imdb.com and watch the entire Hurricane short film at the official Hurricane website: hurricanethefilm.com