This is weird. I’m not so used to having the opportunity or, in this case, the responsibility to create content as personal as what is expected from a blog, but after a few years of pushing this website to as many people as possible, the team here at The Film Magazine have decided that a more personal approach may be a good change-up in our outlay, so here I am! For those who don’t know me – I mean, why would you? – I’m Joseph Wade, a founding member of The Film Magazine and the current editor of all our written content. This is me… 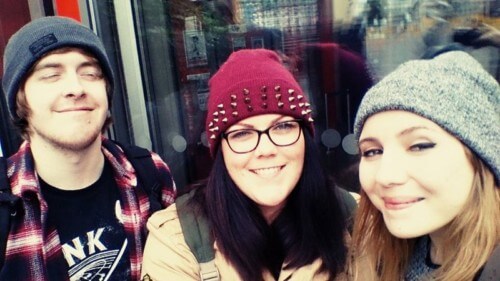 I’ve never been one for looking professional and it’s perhaps obvious that I’ve never been a fan of having my picture taken, but I’m the one on the left (just in case you’ve mistaken me for one of my better looking friends). Admittedly this picture is a few years old but I can assure you that I’m older than I look – trust me, having my face is at times like having that disease Benjamin Button has; I swear I looked older at 17 (which is a really long time ago).

I’ve toyed with the idea of doing a blog like this for some time, putting off the messages from my fellow TFM founding members encouraging me to do so because I always hated the idea of giving such a positive and communal brand the perception of being a vanity project. I actually remain very conscious of this and, as such, you can rest assured that the picture above is the last image of me you’re likely to see out of context in this new blog series. The content of these posts is, however, a different story.

Moving forward with this blog I’d like to discuss contemporary issues and age-old debates side-by-side, post following post, but in this introduction I’d like to give an insight as to what it is that brought me to this grand and most beautiful of art-forms; introduce you to what makes up the parts of me that have fallen in love with cinema.

I know. How very millennial of me.

Today – 29th April – is actually my Birthday. As such I’ve been doing a lot of reminiscing regarding most things in my life, not least the moments that seem to pass by more and more quickly with age. In the midst of my reminiscing, in typically timely fashion, YouTube threw up the suggestion to watch a video essay from Like Stories of Old – one of the best movie YouTube channels around, by the way – regarding humanity’s constant struggle against time and the way this struggle is used to anchor Christopher Nolan’s Interstellar. At around 9 minutes, writer-narrator Tom van der Linden makes the profound point that “coming home for [heroes of journeys/victims of isolation] is rarely so much about the spacial element as it is about the passing of time. It is the realisation that life has moved on in your absence. It is knowing that no matter how you move within the spacial dimensions, you cannot escape time”. It was a point that not only reaffirmed many of my own insecurities regarding my current way of life but, more importantly as regards this piece, also reaffirmed just how much I love cinema. It was a point, within a larger essay filled with more excellent points, that helped me to understand my connection to many of the films I love, not least the subject of the video itself Interstellar, but also my place within existence. Why do we feel empathy for characters in situations so dissimilar to our own? Because we too understand what it’s like to be bound to our limited time on this Earth (or the universe as is the case in this film). Each of us in our own way understands what it’s like to know we shall never have the opportunity to spend our time over again, differently. It’s at times like Birthdays or Christmas that I feel most filled with these thoughts – the dread of unfulfilled potential, whether it be professionally, personally or romantically. And, in watching films like Interstellar I feel like I am not only given the catharsis of acknowledging that other people have the same struggle, but I’m sometimes even given the opportunity to experience the overcoming of such struggles, or at least the acceptance of them. It is this theme that links so many of my favourite films – Interstellar, Before Sunset, Eternal Sunshine of the Spotless Mind, Call Me By Your Name – and the ongoing development of my understanding of time and experiences that has come to define my values as a human being. Here’s the full video:

Until I saw this video, I always felt uncomfortable about acknowledging how much I cried in Interstellar’s third act because of how the film is ultimately about a father-daughter relationship and I have never had a relationship with my own father. Was I crying because I subconsciously craved the same undying love between myself and my absentee father? It was an awkward point to confront. Luckily, Tom at LSOO opened my eyes to the reality of it: that I was in fact crying at the loss of time and therefore the loss of potential moments/memories for and between the characters; an idea that we can all relate to and I am personally very conscious of.

It perhaps goes without saying – as a man in the arts, with undergraduate and postgraduate degrees in new age arts – that I’ve never placed money at the top of my list of priorities, and as such the creation of moments and memories has long been the most important thing to me, especially regarding friends; I really don’t like to miss a big occasion. In Interstellar, as with Eternal Sunshine, the characters are given the opportunity to engage with the passing of time, each of the leads given the keys to unlock their regrets and/or live with the reassurance that their realities were worth it to them, while in Before Sunset and Call Me By Your Name, the passing of time is altogether more destructive, yet similarly as reaffirming of the importance in creating memories and accepting the moments as they come.

Interstellar and the list of other movies I’ve referenced have therefore had a profound effect on me; their insight to my own consciousness being vital in my self-evaluation, my understanding of my own existence seemingly growing as a result of watching them. Is it even possible to love a movie more than through allowing one to unravel and reshape you? In this great race of temporariness, I believe that what I have learned from the likes of these films is something altogether more timeless; something that has shaped my very being. That’s why I love cinema! Sit me down in a dark room with surround sound and a huge screen and I’m a happy person because, more than escapism, cinema offers answers to profound questions I haven’t quite figured out the answers to yet or simply have never thought about asking, and that is something I find to be very special indeed.