In this article I will lay out at least some of the main characteristics of Griffith’s films – especially those that made him a master of the Silent Era and one of the most prominent directors of the late century.

This is not intended as a complete analysis of Griffith’s works and life but rather as an overview.

First of all, it is vital to point out that Griffith embarked on a directing career by chance – he was actually planning to become a stage actor but after a few failed attempts, he decided to turn to acting on the silver screen. Around that time, between 1907 and 1910, the cinema industry was changing and new techniques were being introduced. In this context, Griffith found the perfect environment to forge a career in the movie industry.

From its conception, cinema was an attraction and a diversion for the working class from their everyday life and the strain of work, and it therefore didn’t need to have a particular meaning and structure, with the main purpose of a film being, essentially, to amaze the audience – a reason as to why it was not meant to follow a narrative at all.

In the time span mentioned above, the cinema earned its status as an industry, and it embraced new techniques to attract a different class of viewers: the bourgeoisie. Films were starting to acquire a new purpose besides the need to impress and amaze the public. Along with that, directors were trying to create stories with a narrator very similar to a novel that could immerse the audience in the events shown on screen and favour a sophisticated level of identification with the main characters. In this backdrop, Griffith played a significant role in popularising new techniques. For example, Griffith used cross-cutting to show two different actions that were happening in two different places at once. The use of cross-cutting, along with other techniques in his movies such as close-ups and fade-outs, were derived from the change in the production system which included the improvement of the movie theatres’ rooms in order to be more accessible for the middle class, the increase in ticket prices, the introduction of more moral and pedagogic themes, and the start of the star and studio system. As regards the latter, actors were subject to the impositions of the studio that required a certain public persona, interpreting certain stereotypical characters. As a result, movie actors became more and more popular, but they were also often typecast and therefore associated with only one significant role for the duration of their career.

As regards the actors in Griffith’s films, such as Broken Blossoms (1919) starring Lilian Gish and Richard Barthelmess, the filmmaker encouraged natural and convincing acting performances, an effect that was also emphasised by the use of medium close-ups and close-ups. These shots were already used by the English cinematic school of James Williamson and George Albert Smith, but not in a narrative way or in a feature-length film, since this type of film didn’t exist at that time – in fact, feature-length films were first introduced around the time of Griffith’s most prolific works, giving the director the chance to use and improve these new techniques.

Broken Blossoms is the story of a young Chinese man, Cheng Huan (Richard Barthelmess), who dreams of carrying the Buddha’s religious message to the Anglo-Saxons. In order to accomplish his quest, he travels to London and settles in the Chinese borough, but the dissolute life that the western people and his fellow Chinese immigrants live eventually change him, thus turning him to a life of vice – he becomes a smoker and a gambler. Vitally as regards Griffith’s creative choices, this change of heart is shown through the use of an iris that illustrates Cheng’s thinking as he leans against a brick wall. The sequence ends with the same shot – an iris – that neatly closes Cheng’s train of thought. In this sequence, Griffith also uses an establishing shot – showing us the setting of the story – and different field sized shots.

Examples of the use of an iris and cross cutting: 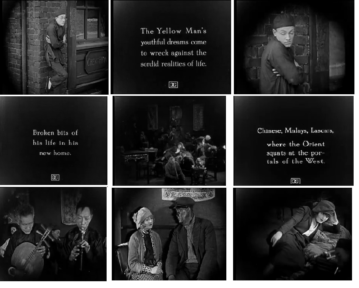 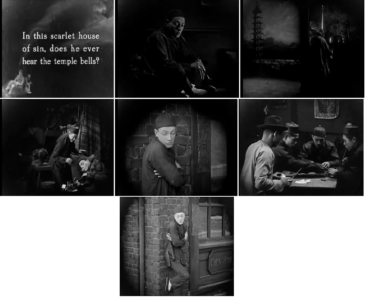 Griffith then shows us the story of Lucy (Lilian Gish), a young girl beaten by her father Burrows, who is introduced via the contrarian medium shot after using a long shot to establish the action inside his home.

Lucy is first introduced by a full body shot. Later we see Lucy in the distance with a long shot:

Griffith uses mostly close-ups and extreme close ups to show the characters’ inner feelings, and an example of this is evident when being invited to witness Lucy’s reaction to his father’s request that she smile at him. Although she’s not accustomed to doing it, she tries to hold up the corners of her mouth with her fingers in order to fake a smile. First, we see a medium size shot of Lucy and then a close-up once she smiles, an element of the filmmaking structure of Griffith’s work that in this case makes her fear towards her violent father quite clear.

The story reaches a turning point when poor Lucy first meets Cheng. In this sequence, Cheng observes Lucy while she’s looking at his dolls through his shop window. The emphasis the camera puts on the dolls is important as they’ll appear again in a pivotal scene in the film when Cheng brings Lucy to his shop – saving her from her father – and he dresses her as a Chinese doll, even giving her the few that she liked. As it is apparent from the screenshots, Cheng is fascinated by Lucy, and Griffith uses a subjective point of view to let us see Cheng’s feeling:

In the following sequence Cheng follows Lucy as she buys a flower and he secretly watches her, although she soon notices it.

Towards the end of the story, Lucy is in the back of Cheng’s shop dressed as a Chinese lady and we see her holding a doll in her arms, but her happiness is short-lived, since a spy – a friend of her father’s – tells Burrows where she is, therefore inciting his arrival at Cheng’s shop. Borrows’ close-up shows his rage and it is evident he’s willing to beat the poor girl. 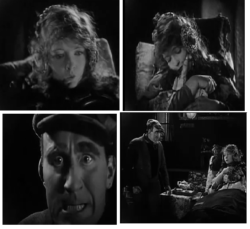 The end of the film is entirely heartbreaking – the screenshots that show us the sad ending of Lucy’s life are part of a ring composition that Griffith masterfully creates – he lets us see Lucy smiling for the very last time, just like she had been trying to smile in the beginning.

After getting Lucy’s lifeless body to his home, a heartbroken Cheng kills himself, committing a final dramatic act. He remembers Lucy as a blossom, as he always associated her with the image of a delicate flower, and the last shot shows London, the city where the tragic story has taken place.

Broken Blossoms is a different film compared to Griffith’s previous epic efforts, such as the incredibly controversial but hugely influential The Birth of a Nation. In Broken Blossoms, Griffith tries to make amends for his previous racist films, each of which were questionable and condemnable from a moral and social point of view, but despite the controversy of the man behind the lens, he is still considered a master who popularised many of the cinematic techniques that are still used today. It’s safe to say that Griffith influenced the whole film industry, as not only was he a founding father of so many of cinema’s rules of visual language, but great directors were inspired by him too, not least Sergei Eisentein, Orson Welles, King Vidor, Charlie Chaplin, Stanley Kubrick and Jean Renoir.