Based on Alejandro Amenábar’s Spanish-language film Abre los ojos (Eng: Open Your Eyes), Cameron Crowe borrowed star Penelope Cruz for his American adaptation Vanilla Sky, a film which packed the same emotional punch as the original, only with more prime Tom Cruise and references to American pop culture. This mix makes Vanilla Sky a moving time capsule on new millennium America and the changing ideals of the time, as well as a quite moving piece in its own right. Did it miss many of the treasures of the original film? Sure. Does it matter? Not so much in the case of this list, where we rank it dead in the middle at number 5. 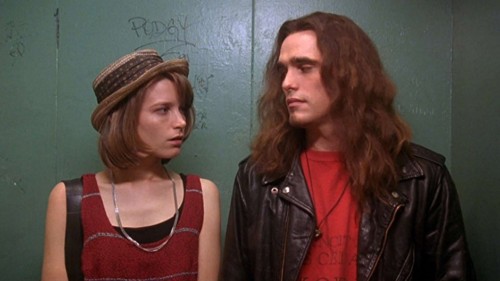 Having released the iconic 80s film Say Anything as his debut feature, Crowe waited three years to release follow up Singles in 1992, a film in which he managed to encapsulate the grunge movement of the time in an hourglass story of friendship and romance that feels as much like a time capsule as everything else the filmmaker has ever put to film. Featuring lots of long hair, pessimism and a general lack of approval for the status quo, Singles was perhaps the film that grunge mega-fan (see Pearl Jam Twenty above) was born to make, and it was surely one of his best outings too.

Fast forward 4 years from our last entry and the new, highly ambitious and prosperous 90s were in full swing, making the similarly as ambitious, money-versus-love centred plot of Jerry Maguire another time capsule of culture worth watching. It was the director’s first partnership with Tom Cruise, perhaps the decade’s biggest movie star, and together they forged a romantic comedy that is so readily associated with its most iconic and popular moments that it’s easy to forget the real qualities of the film, of which there are many. Maguire was the launching pad to superstardom for Renée Zellweger and has probably the best performance of Cuba Gooding, Jr’s career, but most importantly as regards this list it remains Crowe’s only ever Best Picture nominee, and only one of two films to ever earn him a screenwriting nomination (the second is yet to come).

Say Anything is as much a must-watch movie of its era as Jerry Maguire is, yet with current society holding the 80s aloft in a way not too dissimilar to John Cusack with that boombox in the above image, Say Anything must be considered more of a life-changing and pop-culture-infiltrating film than the Cruise-starring Oscar-nominated release, because when a film is referenced over and over again by other films, you know there’s something special at the source. The movie is the modern equivalent to the classic hollywood films that told us bold statements of love solved all of life’s problems, and while that may be problematic in today’s day and age, there is a true sense of innocence about the bold actions of the characters in Crowe’s most iconic movie; our number 2 of his career.

Cameron Crowe earned a screenwriter’s Oscar nomination for his work on Almost Famous despite its non-traditional tone and the manner in which it seemed to avoid the Hollywood bubble in terms of casting and presentation, which is a testament to his work if ever there was one. The film took 4 years to be released following Jerry Maguire and marked the 4th surefire critical success in a row for the filmmaker who at this stage could have been trusted to make almost anything into either a culturally significant or financially successful film. Most importantly as regards this list, Almost Famous was the perfect coming of age movie; a film that defined its time, sure, but more importantly did so by becoming timeless in of itself. A must-watch for anyone who has ever experienced those awful feelings of romance in your developing years, Almost Famous is our number 1 Cameron Crowe movie of all time.