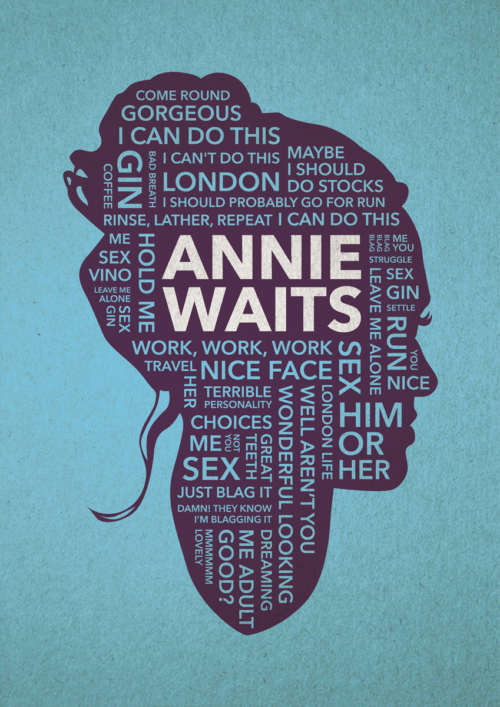 Witty and intelligent, Marnie Paxton’s Annie Waits takes a satirical look at the search for a perfect romantic partner and the trying aspects of young adulthood in just under nine minutes of honest, sex-clad, female-driven cinema that so admirably represents the in-between members of Generation Y.

The movie’s central character Annie (April Kelley) is one without any desire to give in to what she considers the pillars of societal boredom: getting married and giving birth to a child. Told almost entirely through the character’s voiceover narration, the simplicities upon which many romantic relationships find their foundations are presented unwrapped and in all their honest and often brutal stupidity through the eyes of a woman who is so clearly comfortable in the solitude of her own singlehood. A relationship comes and then it goes, often as fast as the one or two sentences it takes for Annie’s narration to describe it. Intelligently, the speed at which the relationships flash by is not only quippy in of itself but, when combined with the short run-time of the picture as a whole, works as a metaphor for the speed at which life flies and how short life comes to feel, juxtaposing Annie’s ideals of a prolonged youth and her seemingly naive fear of sentenced adulthood in the most affecting of ways.

It is in this honest portrayal of tackling your twenties that Annie Waits truly finds its stride, with not only the fears of its central character being identifiable, but the ways in which those fears are presented via the picture and the voiceover being utterly encapsulating of many a young woman in today’s society. Visually, a bombardment of experimental sex scenes are played out with more of a fond glow than any hint of glamour, each of which turns sour and rather dull by each relationship’s conclusion. The ‘on to the next one’ attitude presented in the narration highlights this part of the character’s attitude, creating the feeling of a welcomed encounter with the central protagonist’s personal diary as opposed to any rose-tinted retrospective being told by our self-conscious hero themselves. This diary-like quality vitally imprints the sense of honesty that is so central to the picture’s success, and Paxton always leaves us in the space just outside of being Annie ourselves through some clever ‘through the looking glass’ visual techniques, thus offering the opportunity to realise the subtle ironies that the film presents, not least the juxtaposition referenced above.

At the centre of almost every shot was actor April Kelley whose skittish presentation of Annie grounded the character in a truly identifiable place, with her delivery of the movie’s ongoing narration managing to make her likeable despite her somewhat brutal approach to relationships. It was clear that the actor believed in the project and thus sought to bring the character to life in a down-to-earth realisation, vitally ensuring that Annie wasn’t overplayed and that the admirable side of the character’s honesty was first-and-foremost in the audience’s mind as an aspect of themselves that they could identify with, rather than an unlikable ‘other’ that would have seen her character crumble. It was Kelley’s personification, both physically and audibly, that presented Annie as being as admirably honest as many a thought in your own head and thus, given the age of the character and her sentiments, the suitable representation of Generation Y that the filmmakers had clearly intended.

Technically, the film was a well orchestrated piece too, with the style of editing being the most noteworthy aspect in this respect. At several times, quick cuts work to increase the comedic aspects of the movie and do so without taking away from the impact of its more serious underlying topics. Working alongside some great uses of framing, the editing places introductory scenes next to sexual encounters, bringing about a funny juxtaposition that works to reinforce how Annie may be attached to the pleasure of the act, but is quite obviously detached from the deeper feelings she could hold for the men behind such acts. It’s edited to have each and every moment play as short and abrupt as possible, and this creates the sense that we’re looking back from the point of view of a comfortable present and that the relationships and potential hurt that is caused in such memories or moments matters little in the context.

Essentially, Annie Waits is a film about growing up; a coming of age tale for those stuck in-between recognising who they are and realising what they want from life. Whether this plays in any meaningful or even entertaining way for members of different generations seems to be the stumbling block regarding this film’s universal appeal, yet in being so particular in how it speaks to Generation Y, Annie Waits has presented the story of a character that millions of people could identify with; A character the likes of whom we do not see enough of in cinema, television or on the stage.

A proficient movie that doesn’t break technical boundaries yet presents its story with the sort of precision the personality of its leading character is deserving of, Annie Waits is a witty and honest must-see short film for those stuck in the in-between years of their adulthood.

Annie Waits is a vignette to a TV Series currently in development. It is the debut feature of director Marnie Paxton who previously worked as a script supervisor on TV series such as Misfits and Peaky Blinders. The movie was co-produced by Edith director Christian Cooke and written by Chris Anastasi whose first feature-length film – Method in the Madness starring Kevin Smith, Teri Hatcher, Stan Lee and Vinnie Jones – will be released in 2017.