Abel Gance features as one of the most influential directors of French cinema in the 20th century. He arguably inspired the so-called Nouvelle Vague or French New Wave – the school to which François Truffaut and Jean-Luc Godard also belonged.

Gance’s most acclaimed and perhaps most well-known work remains the silent film Napoleon (1927), which is a gem of the epic genre.

Napoleon (1927) can be considered as the peak of French Avant-garde cinema in the 1920s as Gance made wise use of editing techniques, such as jump-cuts, and he played with the possibilities offered by the manipulation of film (superimposition of images) and the use of multiple film reels (the so-called ‘Polyvision’).

In particular, Gance uses superimposition, which emphasises the extreme close-ups of Napoleon’s face, which in crucial moments convey intense meaning – thus painting the character’s personality – but he also uses quick cuts, which gives us the impression of being in Napoleon’s mind, like we’re travelling through his memories. An example of this can be found during a snow fight at the college where Napoleon lives as a boy. In this very long sequence, we see the fight through Napoleon’s eyes thanks to the use of superimposition, extreme close-ups and fast cuts. More precisely, we find superimposition at the beginning of the long sequence and then mostly fast cuts and extreme close-ups on Napoleon. The snow fight obviously is a foreshadowing of Napoleon’s future as military strategist and his great skill as a leader, the language through which we are told this being somewhat revolutionary for the time. 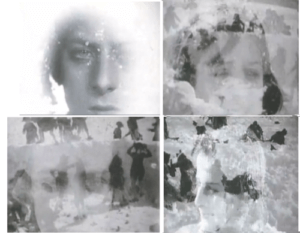 In this sequence, handy-cam shots also convey the excitement and confusion of the skirmish between the boys, and the emotional and psychological state of the main character.

Most importantly, Gance uses a completely new and therefore unique screen technique, the so-called ‘Polyvision’. This consisted of three different cameras in order to project simultaneously three reels of film and to obtain a particularly large aspect ratio on screen. In the final sequence we can find an example of Polyvision:

An example of Polyvision (x)

Although Gance initially wanted a number of sequences to be filmed this way, he was later forced to abandon the idea as the costs and complexity of the process would not allow him to carry it out for multiple sequences.

Today Napoleon’s final sequence is considered an early version of the ‘Cinerama’ that would be introduced in the 1950s.

One may ask, what was the advantage of this very unusual technique?

The main aim of the use of Polyvision in Gance’s film was to widen the screen without using the more common split screen technique. Polyvision also made it possible to not have to use cross-cutting for every frame – although that could also be achieved by using superimposition, thus showing two related moments in the story at once, without cutting – but to instead saturate each frame with complex information (in the case of Polyvision scenes, he created a composition of three shots).

Napoleon’s rebellious and brave nature becomes apparent through the whole of Gance’s work as he masterfully explores the possibilities offered by the interplay of the different elements at hand – lights, film, cutting and camera movements – to create a unique result; one that continues to influence filmmakers to this day and was a fundamental piece of cinema achieving a visual language.