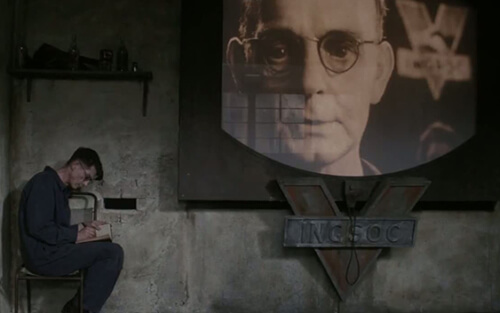 After Donald Trump’s Inauguration in January, George Orwell’s novel found itself at the top of Amazon’s US bestseller list. It’s sudden resurgence in demand caused its publishers, Penguin, to order a staggering reprint of 75,000 copies. Now anyone who has studied history to the smallest degree knows that one of the best ways to understand the viewpoint and mentality of the people living in a certain time period is to study the art and entertainment of the time. I feel like this certain moment in our history will speak volumes to future generations. It is an almost insulting understatement to say that people are feeling a little concerned over current affairs.

Since it’s publication in 1949, I don’t think Nineteen Eighty-Four has ever left our consciousness. The briefest glances in popular culture shows up its enduring influence with the likes of the trash reality show Big Brother (and all its nauseating offspring), and witty panel show Room 101. Even though these examples have severely diluted George Orwell’s message, they still owe their entire existence to the novel. It’s remarkable that a book so quickly inhabited our society’s mind, and that some of its tropes have become common knowledge. I believe this is because Nineteen Eighty-Four portrays our society’s greatest fears and has created a world which mirrors frightening truths from our own.

Nineteen Eighty-Four is undoubtedly one of those books that have changed me as a person. I remember reading the ending on the commute back from work and feeling utterly devastated; nothing is worse than having your heart broken on public transport thus leaving you unable to express it. For a few weeks afterwards, I was still ruminating over it, turning it over and over in my mind. It made me restless as I felt I had no outlet for the emotions it stirred up in me, and I became curious as to whether any adaptions existed. As such, I have been anxious to see Michael Radford’s movie for some time now; mostly to find out if it can offer anything more than the book. Well, as a little spoiler for my review, it left me staring into the darkness of the night from my sheets in the late hours. It seems I can’t handle this story in any form.

The plot follows Winston Smith (John Hurt) a man trapped in a life in which the movements of the whole population are controlled by the “Party”, ruled by “Big Brother”. The party has dominion over a land called Oceania which is constantly at war with either Eurasia or Eastasia. It systematically subjugates its people with constant surveillance coupled with the constant threat of torture and death at merely the thought of disobedience. In its mission of total obedience of all those in Oceania, the Party has severely warped society as we know it, destroying the family unit and suppressing sex to create truly isolated individuals. It fabricates its infallibility and omniscience by employing members of its party to rewrite history. Winston is employed in such work – altering newspaper articles from the past to cover up any contradictions, but he finds that he can no longer be at odds with truth. He contemplates the idea of resistance – he knows that even just thinking about this has already caused his death – but he only becomes truly defiant against Big Brother after he meets and falls for Julia (Suzanna Hamilton). He becomes confident in making a real difference in rebelling against the Party when he is approached by the enigmatic O’Brien (Richard Burton), who hints towards the existence of “The Resistance”. Unfortunately, Winston’s luck does not hold out.

I confess that I’ve found it very difficult to review this movie, but understandably as it must have been difficult to adapt Nineteen Eighty-Four into a film. The novel is highly cerebral to say in the least, and a fair chunk of the cogitating stuff had to be cut out to make a comfortable running time of just under two hours. Despite such severe truncating, the movie still introduces the audience to the unique concepts George Orwell created in his book such as “Newspeak” and “Thoughtcrime”; but as these ideas are deliberately alien and jarring, without the benefit of a First-Person Narrative explaining these terms to the Nth degree, their significance ends up getting lost. There are a few moments in the film where this happens: important details Winston is charged with erasing show up later revealing small revelations, but unfortunately it was very easy to miss them. Also, the bizarre philosophies O’Brien preaches to Winston as he interrogates him blow your mind when read, but only succeed in mystifying the audience through film.

Despite it falling a bit flat with the intricate, intellectual stuff, Nineteen Eighty-Four succeeds in its more visceral approach. After only 20 minutes of the constant background babble from the telescreens regurgitating statistics of the Party’s economic and military victories, I wanted to punch my screen to silence it. This illustrates how easily the movie allows the audience to inhabit Winston’s life and to partake in his emotional journey with him. The narrative of the Telescreens when pulled in contrast with the setting creates the frustrating fog of untruths that hang over Winston’s head: industrial excellence coupled with crappy plumbing and cigarettes; claims of eradicated diseases punctuated by Winston’s wheezing and guttural coughs; massive successes in food production which are placed in stark contrast with the emaciated and malnourished swollen bodies that populate the film. The cinematography and editing takes this dizzying effect that one step forward, making truth and reality intangible, almost a completely bizarre concept. In a single shot, the changing camera angle reveals the face of a pretty, made-up prostitute to actually be one of a toothless, wrinkled old hag. The uncomfortable startling revealing shot, perfectly emulates Winston’s disgust and self-hate over his consummation of that particular business transaction.

The film’s real triumph is the portrayal of the love affair between Winston and Julia which gives the whole thing its emotional poignancy and power – as soon as the film starts you get sucked into this horrible world and it genuinely depresses you. So, the moment Winston unfolds Julia’s note to him to reveal the words “I LOVE YOU”, you feel total elation, especially as the haunting notes of The Eurhythmics’ soundtrack begin to take hold. It is the beauty of their love that shows the true horrors of Big Brother. Julia undresses and bares herself to Winston in the lush greenness of the countryside, allowing Winston to contemplate how good life can be, and such is the tragedy in his musing whether such a thing could be normal. When Julia and Winston are arrested, they are naked and it’s an incredibly uncomfortable scene – you feel almost as if you yourself are on display to Big Brother. As Winston is tortured by O’Brien, his mind keeps slipping back to that first rendezvous, but this beautiful place is now infected with images of Winston embracing O’Brien, whispering love declarations to him. Big Brother is not just an invasion on personal privacy, it’s an affront to the human spirit that will destroy all remnants of human decency – far more than the physical torture, it is this that crushes the audience’s hope.

Without analysing the film in any intellectual way, just reflecting on my pure emotions, I can say that it left me inconsolable. So did the book. In the time that passed after watching this movie there was a heaviness in my chest and a sadness I could not shift. Such a response is an awesome tribute to the acting in this movie in particular. John Hurt practically carries the entire film in the role he was born to play: Winston Smith. As one of the greatest character actors of our times, Hurt brought a great vulnerability to so many of his roles, and as Winston he embodied his suffering and systematic destruction – it reaches out to the audience and pierces your heart. Seeing John Hurt in 1984 makes you realise what a loss his passing has been, but in such movies his work will surely be immortalised. Of course, the romance was made believable with the talent of Suzanna Hamilton who projected such a raw tenderness and earnestness in her love. Also, Richard Burton’s last film role was truly menacing, mixing the image of a kindly grandfather with a diabolical evil mastermind. It was a credit to his amazing career and a fitting final part.

On a final point, the reason I believe this to be such an important film is because of its ageless quality. Michael Radford was anxious to not draw any obvious parallels with any real-life political regimes, past or current, knowing that Orwell’s novel was more of a general warning. Remember that when this novel was first published, Orwell had witnessed the simultaneous downfall of a far-right totalitarian regime with the erection of the Iron Curtain that heralded far left dictatorships which became responsible for the deaths of millions. Fortunately, Radford’s neutrality allowed the audience to create more independent and personal interpretations. Audiences in 1984 probably witnessed their own Cold War fears, whereas I saw the destruction of Syria and the demonisation of the refugees who have fled fates worse than death (and additionally the frustrating new trend of “Alternative Facts” and “Fake News”). Some see it as anti-socialist, for others it’s a criticism of capitalism. Such openness allows us to witness the evils that can spring up from either side of the political spectrum, and lets us realise what the real enemy to freedom is. Hate. Whomever craves power will always use hate to divide us, and through this division will enslave us.

“If you want a vision of the future, Winston, imagine a boot stamping on a human face forever.”

In the past year alone hate crimes have risen all over the world, and certain individuals have used ordinary peoples’ fears to bring power to themselves. Michael Radford’s 1984 is our wake-up call, to let ourselves be brave enough to love in a world of hate and be able to say with full freedom, 2+2 = 4.