The Motion Picture Association of America (MPAA) has released details of how the film industry made a percentile more money at the global box office in 2016 than ever before. 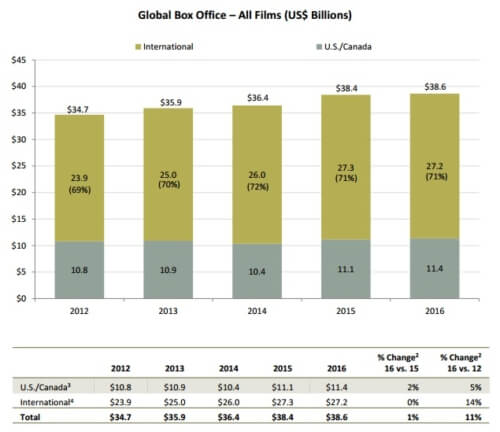 The $38.6Billion landmark was hit despite a 1% decrease to ticket sales in China, which has long been seen as an emerging market that increased by a whopping 49% in 2015. It was the North American market’s 2% increase in revenues that is believed to be the most significant change that led to the new record, though an 8% increase in total cinema screens worldwide is also believed to be of the utmost importance.

“The continued strength of the box office demonstrates that cinema remains the premier way to experience great storytelling for audiences around the world. In the United States and Canada, there are key indicators that suggest the future may be even brighter, with increases in attendance among younger demographics and diverse communities, in particular. The film industry continues to thrive because every facet of the industry – production, distribution, and exhibition – is relentlessly innovating to bring new stories to life on the big screen.”

Around 71% of Americans and Canadians (246 million people) attended at least one cinema showing in 2016, with the 18-24 demographic again proving to be the most likely visitors with an average of 6.5 views per capita. There was also an increase in the number of movies Black and ‘Asian/Other’ audiences were attending with a 0.6 and 1.2 films per capita increase respectively.

For full coverage, you can check out the statistics provided by the MPAA in the image files below…