The historical coastal town of Whitby, North Yorkshire has many events throughout the year from the world’s biggest Goth festival, to pirate weekends, folk week, regatta, and Christmas markets, but the one thing my hometown has never had is a Comic Con.

However, all of that is about to change as father and son duo Adrian and Jack Booth are working hard to put Whitby on the map as a Mecca for all the geeks and nerds out there, with the first ever Whitby Sci Fi & Comic Con, taking place on Saturday 28th November at the town’s iconic Spa Pavilion Complex.

In keeping with our town’s grand traditions for doing things differently, the WSFCC is not your normal, average convention, and the story behind it is both moving and inspiring.

A long time passion project for Adrian and his family, who moved to Whitby from the Midlands six years ago, and shortly afterwards opened their shop ‘Outpost 31’ (an Aladdin’s Cave for geeks), one of their aims was to organise a comic con in the town.

In May of this year Adrian’s wife Sharon was diagnosed with terminal lung cancer and given only months to live. Sadly Sharon passed away only four weeks later in St Catherine’s Hospice at the age of only 44, but in those four weeks Sharon set about making plans for the future. One of those plans was putting the wheels in motion for the Whitby Sci Fi & Comic Con, with a slight twist. Rather than running the convention as simply an extension of the shop, proceeds from the event will be donated to Cancer Research UK, specifically the section of the charity focusing on the early detection of cancer.

What would be a better way of helping to keep Sharon’s legacy alive than going along to a convention and reveling in the things you love, whilst at the same time raising money for charity? No blister inducing sponsored walks, no training for marathons or jumping out of aeroplanes, just spending a day celebrating something you love.

With a wide range of attractions including a life size Jabba the Hutt, a Game of Thrones throne, and replicas of Barricade from Transformers and Lightening McQueen from Cars, along with over 50 traders and stalls, there is something for everybody.

As well as all the fantastic products and memorabilia on offer, ranging from local artists to national and international sellers, there is also a chance to get your hands on exclusive comic books from artist Steve Scott who has produced a comic especially for the event.

Additionally, the downstairs space in the complex will be turned into a zombie experience, with Newcastle based horror make-up specialists Gorefreak FX creating the zombies for the exhibition, who will then endeavor to scare the living daylights out of visitors who will be led around the exhibition by Daryl Dixon. Gorefreak FX will also be doing a number of zombie makeovers throughout the day with proceeds again going to Cancer Research UK.

And, of course, no convention would be complete without some fantastic signers.

The line up includes the first ever Stormtrooper in Star Wars: A New Hope (1977), Chris Bunn, whose acting credits also include The Avengers, Superman 1&2, and various James Bond films. Winter is coming as actress and contortionist Pixie Le Knot, better known as Kayla from Game of Thrones, takes a seat. Prometheus engineer Phill Martin will be unmissable – literally, he is seven feet tall! Canadian actress Leah Cairns, star of Battlestar Galactica and Interstellar will also be attending in her first ever trip to the North of England.

With the aim of bringing the whole community together, and filling a rare quiet spell in the town’s social calendar, the Whitby Sci Fi & Comic Con has something for everyone whether you’re a dyed in the wool, fully certified geek, a casual fan, or just want to broaden your horizons.

So come along, meet new people and have fun at the first (of hopefully many) Whitby Sci Fi & Comic Con. 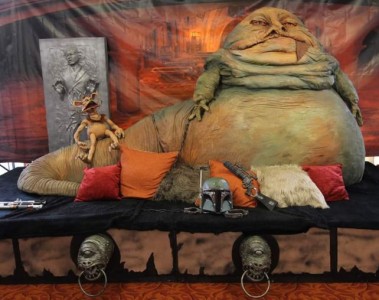