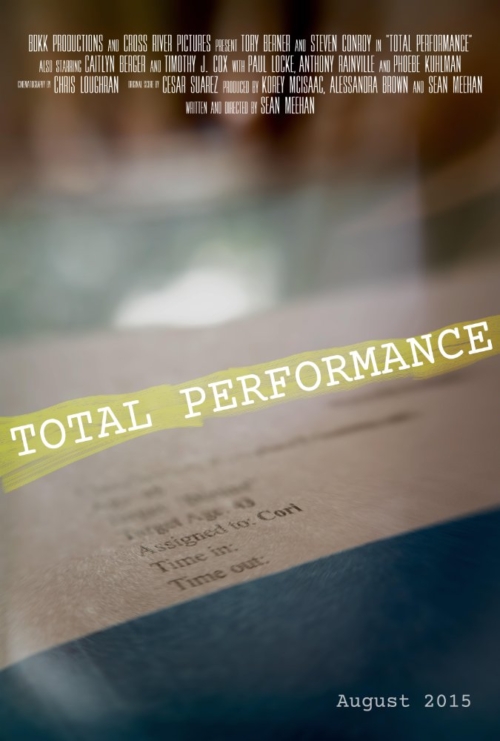 Director: Sean Meehan
Screenwriter: Sean Meehan
Starring: Tory Berner, Steven Conroy
Plot: Cori is an actress, but her main gig is a little bit different. She works for a company that employs actors to play apposite real people who want to rehearse a difficult conversation. A breakup, a firing or even an embarrassing confession: the company that she works for provides a leaving, breathing ‘sparring dummy’ for their clients.

At some point in our lives we’ve all come across those awkward conversations we’ve had to have. You sit at home, trying to find the right words, worrying about how you’ll get it over with. How will you find the best way to break up with your partner? How will you confess your deepest secret to that important person? How will you fire that useless work employee who’s actually one of your closest friends?

But, what if you didn’t have to worry so much about how the situation will play out? What if you could practise your speech before the big event? I don’t just mean by yelling at your reflection in the mirror…

Sean Meehan’s short film, ‘Total Performance’, gives us the answer: a company dedicated to providing us with the opportunity to rehearse these challenging encounters on a real-life ‘sparring dummy’. This is where we find Cori (Tory Berner), our leading character of whom we follow through some fast-paced twists and turns in this 18 minute short film.

Pitched as a drama-comedy, ‘Total performance’ does an exceptional job of switching between the conventions of the two genres, allowing us as viewers to experience humour, shock and sadness. Oh, and possibly a bit of anger because Tim (portrayed by Steven Conroy) is an ass. The movie is well paced and, aided by its well-chosen music, transitions effortlessly between its sequences and the range of emotions portrayed, something which even box office hits can sometimes fail to do.

One flaw I did find, however, was that some scenes came across as a little stiff. This was due to their awkward silences. For me, this is a result of the lack of background noise in some scenes. For example, near the start of the film when Cori is sat in the street, there is nothing but the sound of her customer walking down the stairs and their conversation. Aren’t there any cars driving around in the neighbourhood? It seemed far from a purposeful technique to help encapsulate how the character’s work-life was all encompassing and thus, instead, equated to a sense of falsehood that was instantly disengaging. We didn’t even get the classic ‘wind breezing through the branches’ soundbite and thus the film was left feeling a little unfinished.

The absence of sound isn’t played out in such a negative manner throughout the film however, and is actually used to its benefit on many occasions. For example, during the film’s opening sequence there is little to no background noise, implying the uncomfortable nature of our character’s client meeting, and creating suspense about the scene unfolding before us. Similarly, at a later stage in the film, when Cori is home alone and emailing about an audition, the silence here comes across as more thoughtful and comfortable. Having the email as a full-screen shot, as if we were typing and deleting the sentences ourselves, was an impressive tactic, adding to the scene in a way that a simple “sent” message on a screen in Cori’s hand couldn’t have achieved. Conclusively, in both these instances, the silence is an effective tool, adding to the quality of the the ideologies and themes being explored.

Colour choices appeared prevalent throughout the film too, a choice that I found to be a nice touch that helped with the transitions between scenes as it pulled them together well. It didn’t take long to notice the colour Blue cropping up throughout, from folders and the receptionist’s jumper to Tim’s apartment and the lighting when he finally has ‘the talk’ with his girlfriend. This consistency, and the way it bounced off the rest of the film’s colour pallet, helped to bring a quirky element to ‘Total Performance’ and vitally worked to create a contrast between the movie’s ‘helpful’ company and an audition to which Cori attends. From the grey walls, to the grey tinge in the lighting, to the grey jackets that both Cori and her rival actress are wearing, everything is dull in this scene. Interestingly, this seemed to indicate a sense of life in the ‘Total Performance’ business, offering interesting commentary on work environments, big business and professionalism.

Tory Berner and Steven Conroy did an excellent job in the leading roles, managing to switch from their fun-loving, humorous personas on their first date to more series and emotional leads later in the film. Berner, in particular, played a likeable and true-to-life character who transitioned between each of her character’s roles and emotional states with ease, leading to a seemingly effortless and well-rounded story.

The concept behind the film was an interesting idea and, although it reminds me a little of the Sci-Fi T.V. series ‘Dollhouse’ created by Joss Whedon, it posed a fascinating story and one which I am intrigued to hear more about; which leads me to my only real issue with the film: it just wasn’t long enough. I wanted more. Whilst I’ be happy to be done with Tim and his two-timing ways, I’d definitely be interested to be given more depth regarding the ‘Total Performance’ company. As a viewer, I want more details on what goes on behind the scenes, what it’s like for the employee’s day to day and what kind of things go wrong. I want a feature-length version!

As is the case with a lot of short films, there are several questions that go unanswered, which only heightens my want for more. For example, what happens to Cori? Does she ever get her big break? How did she end up working for ‘Total Performance’ in the first place? Hell, how does anyone end up somewhere like that? So many questions are left unanswered. Arguably, this is what any good short film does: it leaves you wanting more. And ‘Total performance’ does.

Overall, I think Meehan did an excellent job and, whilst more length might have allowed for a more in-depth explanation of some aspects, watching the film was an enjoyable experience. With a talented cast in regards to both the leads and the supporting actors, this film was well executed and does a great job of presenting us with an original concept we can all appreciate.

You can watch ‘Total Performance’ at: Vimeo

You can find more information on ‘Total Performance’: IMDB

Sophie Grant
Currently a psychology student with a crazy range of interests. I'm a massive book lover and I'm always overjoyed (and terrified) when I find out one of my favourites is about to hit the big screen. I won't lie, I'm horribly picky when it comes to book to film adaptions. But hey, you'll learn to love it!