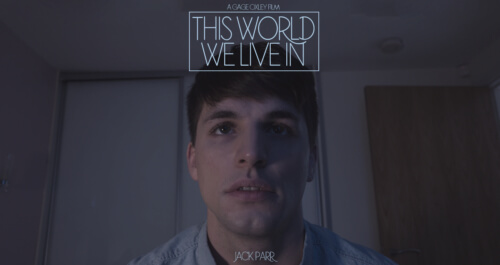 As Joey’s internal narration began, I thought this short movie would be a brief and somewhat gentle ramble through the modern-day struggles of those in the LGBT+ community, with lots of meandering metaphors. I admit I was quite mistaken as I had to pick my jaw off the floor after its 25-minute run. ‘This World We live in’ was a film of phenomenal pace which refused to pull its punches in portraying the brutality young men endure to match up to the ridiculous expectations of hyper-masculinity.

Joey, the picture’s central protagonist, appears to be a regular kind of lad enjoying the Student life – he takes part in sports with his friends, plays video games and goes on nights out. But underneath this supposed contentment, Joey is in absolute turmoil. Throughout the run of the film, Joey is in the act of systematically suppressing himself – suppressing his urges, his wants, his needs and of course his emotions. More than anything else, these things are completely forbidden to be shown. It is this monstrous inner battle that is so clearly and wonderfully illustrated by the quirks and turns of Jack Parr’s facial expressions. Even in the more subtle moments of his portrayal of Joey, you can read his face like a book. The awkwardness and mortification that goes beyond the clumsy fumbles of a one night stand, you can see there is no real attraction on his part. His constant paranoia from being caught out is clear. This fear is exaggerated by the intrusive view of the camera, set up so it imitates a bystander’s view of Joey, as if he is constantly being scrutinised and judged.

More tragically, you can also clearly see the disappointment in himself when he finds himself keeping up the lies as he partakes in bragging rights with his friends, and even worse his self-disgust during the movie’s climax. The nuanced performance of Jack Parr made the ending gut-wrenching, but one criticism I can give is that this turn of events unfortunately borders upon the melodramatic. To be honest, this is typical of most short films, the constraints of time forces the script to take huge leaps in a plot, and I feel it is justified in the case of ‘This World We Live In’. People mistakenly think that because we are living in the 21st century, all problems regarding LGBT+ civil rights have been solved, even though there is still huge amounts of hate and animosity towards the community (some instances have been reported globally); the likes of our hyper-masculine culture is toxic to society as a whole, but with phrases like “No Homo” being bandied about this culture is particularly harmful to young men like Joey who are still at odds with their sexuality. Through this culture, Joey associates shame with this part of his identity, so with discovery of compromising adult material of himself, his reaction is not too out of character for someone who has endured these heteronormative expectations for too long. This devastating turn of events has opened my eyes to the dangers that young men like Joey face. Drug fuelled, orgy sex dens is the worst possible introduction to anyone’s sexuality – I feel I can’t emphasise that point enough. I also appreciate Gage Oxley’s frank approach to showing that young men are in danger from rape culture just as women are.

Despite the distinct British Northerness of the script (and it is this kind of identity which I love to see in small independent British productions), in the role of screenwriter, Gage Oxley did commit a few other movie sins making his efforts sometimes seem a little lacking in creativity. For example, Joey’s narration was unnecessary, and I think it would have been a much better watch without it, particularly as the cast barely got the chance to show their mettle. I mean I can understand why – ‘This World We Live In’ is clearly a passion project of Gage Oxley and all those involved obviously feel very strongly about the issues portrayed, and as such they really wanted to make their message explicit as possible – but, this underestimates the audience and reduces the film’s visceral impact; I mean it’s a bit annoying when someone is outright instructing how you should feel at a certain point. Worst of all, it reduced the dialogue which stole much of the supporting cast’s time to shine; I would have loved to have seen more of Kaya who had a moreish kind of cheekiness.

Gage Oxley did, however, display a greater maturity in his part as director, especially via his focus on Jack Parr’s tormented face which worked tremendously to tell Joey’s terrible tale. And, as already referenced, I was really impressed at the use of camera angles to emulate the eye’s view of a bystander, adding to the film’s main metaphor of society’s constant judgement of our youth. He really excels in his orchestration of the film’s emotional climax as he weaves several technical elements to create such brutal tragedy. For example, up to this moment the sound was mostly unremarkable but, in the throes of Joey’s overdose, it whites out and refocuses so that the audience shares in Joey’s claustrophobic fate. The performance of Jack Parr in these moments was simply phenomenal, as was his entire showing. The actor simply made the film courtesy of a fear and vulnerability that overcame the hokey narration to break my heart by the film’s end and ultimately steal the show.

‘This World We Live In’ was a film that did often fall into clichés which bashed its originality a bit. However, it was bold enough to illustrate the gory consequences of our society’s ridiculous standards for young men. Joey’s tragic fate has the potential to burst the bubble so many modern people live in these days, those who haven’t experienced these issues directly and thus assume they don’t exist at all. It is an effective wake-up call for people to try and give just an ounce of compassion. In this current day and age, it is movies like ‘This World We Live in’ that we need more than ever – a voice crying out in the wilderness, a shout in defence of the every-man – and it honestly does fill me with pride to see independent British productions rise up to this task. Gage Oxley seems like a film-maker of great conscience and I am definitely curious for any future productions with Oxley in the director’s chair. I also have much hope for Jack Parr who has shown so much promise in his outstanding performance.

To commemorate the 50th anniversary of the decriminalisation of homosexuality in the UK, screenwriter-director Gage Oxley is working on 3 short films (ODYSSEY) to raise awareness of issues and challenge stigmas within the LGBT+ community in 2017. This World We Live In is the first in the series, with the preview release having occurred on March 11 2017.

Director Gage Oxley is available on Twitter at: @GageOxley