From a young age, I have always admired the work of J.R.R. Tolkien and have been fascinated with ‘The Hobbit’ (the books as well as the film franchise). If I had to choose, I would consider myself more of a fan of the film adaptations because of how you get to see the characters ‘animated’, so to speak, as opposed to visualising them via a text-based medium. Although I do love the book, characters you’ve grown so fond of from reading them ‘come to life’ in a film. Though it must be noted that the book and film version essentially go hand in hand with each other; they are whimsically wonderful, especially for a huge fantasy film fan like myself.

I’ve always considered fantasy movies to be the producers of many a moment of escapism into another land engulfed with marvelous mythical beings and riveting realms that have often originated from the mind of a literary prodigy. I think the fantasy genre is something special and, most recently, ‘The Hobbit’ has been added to my ‘favourite franchise list’. 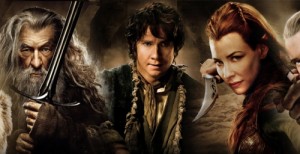 The phenomenal ‘Hobbit’ films (much like Lord of the Rings) are beautifully broadcast, encapsulating Tolkien’s story with such honour. Peter Jackson (one of my favourite film directors) transformed the written series into a saga that has captured the hearts of Tolkien fans, like myself, not only for the presentation of its astounding acting, but also for its setting, plotline and overall ‘feel’.

I was in awe of the acting from the cast whilst watching all three films – Richard Armitage’s portrayal of Thorin Oakenshield was so convincing that at some points you forget that Armitage’s dwarf depiction is an ‘act’ – and I saw Thorin as a ‘real’ person, which seems strange but I have found this notion previously, with other characters, both in the ‘Hobbit’ (Martin Freeman’s portrayal of Bilbo Baggins), as well as in other film franchises.

I always find that I get attached to characters – both heroes and villains – as there would not be a story to tell without the correlation of good and bad. Even Bolg (which is a bit Orc-ward… budum tshh) makes a fantastic CGI villain – I always root for the hero of the tale, but a good villain disrupts the equilibrium, thus making the plot more adventurous and entertaining overall. The characters of the saga each possess an interesting quality and link together with great intricacies, thus making the film flow proficiently.

I won’t give too much away for those who haven’t seen any of the films, but there are certain iconic scenes that really cement the franchise as being the epitome of fantasy-based adventure. Much of this is experienced in the second ‘Hobbit’ film ‘The Desolation of Smaug’ where the heroes of the tale, such as Thorin Oakenshield (Richard Armitage) and Kili (Aidan Turner) are freed by Bilbo Baggins after being captured and seized by Thrandruil (Lee Pace). Baggins hides his companions in empty barrels which, once released, end up in a fast-flowing river. The sequence, of course, does not run smoothly, as a barricade of orcs encounter the heroes and begin their inevitable attack, which is aided by the High Elf, Legolas (Orlando Bloom). Both sides battle it out in an intense manner, with the rapid-flow of the river complimenting the quick-paced nature of the fight itself. I won’t include how it ends, but it is definitely one of the most adventurous scenes of the entire franchise, barring the battle scenes (the most important of which is the final duel that is featured in ‘The Battle of the Five Armies’ between Thorin and Azog). It’s heart-racing to say the least, and possibly one of the best battle scenes in the fantasy genre of all time.

Overall, ‘The Hobbit’ will always be one of my favourite film franchises, not only for the epic scenes and brilliant cast of amazing actors, but for the element of familiarity for myself personally, as I am a huge fan of Tolkien’s work. To see such fantastically wondrous work brought to life visually is something truly special indeed.