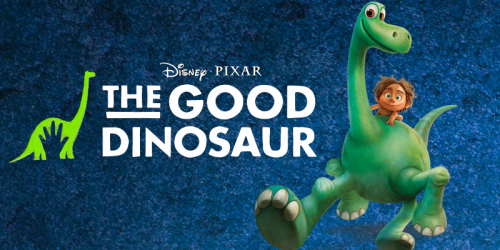 ‘The Good Dinosaur’ asks the question: what if the meteor that wiped out the dinosaurs 66 million years ago didn’t? A million years after that would-be catastrophic meteor strike, it follows the typical ‘inverse boy-and-his-dog’ relationship between Arlo, a young Apatosaurus, and Spot, a 5-year-old human. In a series of luckless events, Arlo is swept down river and separated from his family. He must then find his way back home despite the many challenges he faces.

From the very start ‘The Good Dinosaur’ was a storm of empathy and emotion. You may think it’d be hard to relate to a neon green dino, but leave it to Pixar to make it feel like the most natural thing in the world. From the moment Arlo hatched, knobby-kneed and bright eyed, the audience knew he’d be our timid hero. After all, being the youngest and smallest in the family, he had the most to learn and the most to prove.

It was soon established that Arlo wouldn’t be able to learn without his father leading the way. Tall, strong, and wise, Papa was one of my two favorite characters. He helps Arlo realize that even the best intentions, when acted upon, can have dire consequences, and teaches his son that “sometimes you gotta get through your fear to see the beauty on the other side.” A wise guiding force is common in Disney/Pixar, but even 65 million years ago the archetype doesn’t seem old. My other favorite character was the Pet Collector. He was beautifully, wrongfully funny. His dead pan style humor, vacant stare, and affinity for naming the critters he collects give him a uniqueness and hilarity that is rivaled by few others.

All of the characters seem to communicate a host of emotions, to each other and to the audience, without words. The animators communicate with the viewers in the same way. Their time and attention to details as small as eye colors — Spot’s was Arlo’s skin color and Arlo’s was Spot’s — are reasons why the company keeps producing classics. Because of all of this, ‘The Good Dinosaur’ has the ability to break your heart in all the best ways.

Personally, this film is my new favorite Pixar movie. There are some slightly bizarre scenes, but the animations is stunning, the dialogue is heart-breakingly funny, and the emotions feel real. The amount of time, effort, and thought, that the creators put into the movie along with its unparalleled ability to affect the audience are why ‘The Good Dinosaur’ gets a…