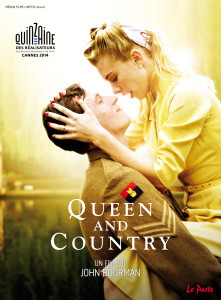 The film starts with Bill Rohan (Callum Turner) being conscripted for military service during the Korean War, which lasted from 1950 to 1953. The story focuses mainly on Bill and his best friend Percy Hapgood (Caleb Landry Jones) with whom he does his basic training. The two get very close and they will eventually help one another, with Bill coming to help Percy in important ways several times. Their friendship is then put to the test by the events at the camp and the two find themselves dealing with despotic and arrogant superiors like Sergeant Major Bradley (David Thewlis), Major Cross (Richard E. Grant) and, most importantly, RSM Digby (Brian F. O’Byrne). Bill and Percy try to survive the camp while managing to find love: Percy with Sophie (Aimee-Ffion Edwards) and Bill with the troubled Ophelia (Tamsin Egerton).

Bill seems a young pacifist who isn’t really interested in war and sees his recruitment period as a duty. He’s called to be the teacher of the new recruits who will have to join the UK Army in Korea soon, but he’s not much convinced by the rhetoric of war and he clearly doesn’t want to fight. Unfortunately, Callum Turner was not impressive in this role; I simply did not feel passion or commitment from him. On the other hand, I enjoyed Caleb Landry Jones’s performance as Percy and Tamsin Egerton’s performance as Ophelia. They are both very talented actors and they each conveyed their characters’ feelings brilliantly. The rest of the cast was also impressive.

Generally, there were some other faults in this film; especially the way the relationships between Ophelia and Bill, and Sophie and Percy, were portrayed. They simply weren’t developed well enough. It’s quite obvious that both are impossible relationships – I can’t tell you why, or I would reveal too much of the plot – but Ophelia’s motives are so unjustified and it seems as if she doesn’t really care about Bill. The same goes for Percy and Sophie – it’s a one-sided relationship. Their stories seemed a bit forced to me.

Another fault is the development of the story. It could have been handled differently. At the end of the film you are left with so many loose-ends, that you keep wondering what happens to the characters. You get a glimpse of what happens to Bill but the fate of the others is completely left out. It would have been interesting to know more about Ophelia, for example. It seems so strange that her story doesn’t have a proper ending since Bill spends most of his time out of the training camp with her, making her a central part of the film’s plot. My only assumption as to why the director would not focus on these things is because he must have wanted to focus on other aspects of the characters’ lives, mostly on the military setting. Boorman was very accurate in showing how stressful life was for young soldiers, all the pressures they had to overcome and, most importantly, the superior’s arrogant and haughty attitude towards these young men.

All in all, despite its faults, I wouldn’t say the film was bad – it wasn’t exceptional but still an enjoyable drama that I would recommend for the interesting range in performances and the commentary the film offers on military service/conscription. So, perhaps give it a try if you love period dramas and especially those set during times of war.