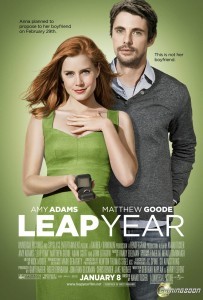 Leap Year (2010)
Director: Anand Tucker
Writers: Deborah Kaplan, Harry Elfont
Starring: Amy Adams, Matthew Goode, Adam Scott
Plot: Anna has a perfectly scheduled life with a long-term boyfriend, Jeremy, to match. After he fails to propose, she plans a trip to surprise him in Dublin to honor an old Irish tradition of a woman popping the question on Leap Day, February 29. However, when she runs into trouble and meets Irish pub keeper Declan, her plans become unclear.

Twenty minutes into watching this film, my first impression was that it was going to be a cookie-cutter, sappy rom-com with no distinguishing characteristics. As the movie progressed, I was pleasantly surprised. Not only was the Irish setting beautiful, but the two main characters, Anna Brady, played by Amy Adams, and Declan O’Callaghan, played by Matthew Goode, were somewhat dynamic and interesting. In this instance the writers turned an average plot on its head by using poignantly funny twists and turns, and elaborating on the characters and their abilities to build relationships.

At first Anna is the stereotypical materialistic Boston girl who is blindly happy in her pursuit of marriage. Even though you see her experience emotions like happiness and disappointment, there’s a disconnect. She’s almost impossible to empathize with because there isn’t really any depth to her life. As the story continues however, you see Anna grow and change in her wants and underlying character-driving needs. She slowly realizes how trivial material possessions can be and how it’s the strong relationships people build that truly matter.

This growth couldn’t happen without Declan, which makes sense seeing as how he’s the other main character this film follows. When we meet him, he’s cynical and sarcastic and brooding – just the rom-com type. Throughout the course of the movie the writers allow this character to give hints as to why he acts the way he does in a way that creates an interest in the viewer. If for no other reason, people would stay and watch the movie to learn about Declan’s motivation.

Both Declan and Anna change and grow because they meet each other. The changes are believable, too, because Amy Adams and Matthew Goode are talented performers who have great on-screen chemistry. You have fun watching them bicker and laugh, and even though some scenes can seem a little cheesy (which, honestly, is to be expected in this genre), the unexpected comedic twists thrown in make up for it.

There were only two things I was disappointed with, and because this film was mostly character driven, each disappointment is with regard to particular characters; the first being Anna’s father.

It’s mentioned in the movie that Anna and her father had a strained relationship. He’s portrayed as unreliable and almost always late. Anna even mentions later in the film that, because of her father’s financial recklessness, she had to have two part-time jobs while she was a full-time student. However, that’s the only other time her father is ever really mentioned in the film after he’s introduced in the first act. There’s a passing phrase here or there but nothing of substance. Sure, this knowledge gives the audience minor character background but, overall, it didn’t add to the script. In a collection of generally funny and engaging dialogue, it seemed as if the writers were grasping at straws to make Anna’s struggles seem more relatable.

The second character I found disappointing was Jeremy: Anna’s boyfriend of four years. He’s a clean cut cardiologist from Boston. He’s also an extremely flat character. Okay, it makes sense that he’s materialistic and ultimately shallow because this contrasts pretty nicely with Declan’s minimalistic, Irish countryside style. However, Jeremy is more than shallow, he’s hollow. You don’t love him; you don’t hate him; you don’t feel for him in any way. This is not to discredit Adam Scott’s acting, as Scott seemed to try very hard to make the character something more than a boyfriend or a placeholder. However, if there’s no foundation, it’s impossible to build a character, and this was yet another example of this within the rom-com genre.

As a whole, the movie is more insightful than it first lets on. Once you get past the first half-hour, you start to see character growth and the dynamics between the characters and their relationships to the world change. The score is fitting in just about every scene but there are only one or two instances I can think of in which it truly stands out, though the different locations used for shooting this movie were absolutely gorgeous – I would even venture to say that they are a large reason as to why the film is so good to begin with. All of these magnificent places are shot in a way that makes the viewer’s heart ache for travel and love. In the end, all of these things added together to win my appreciation and that’s why I give this particular rom-com a…