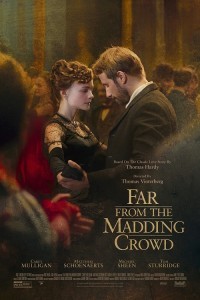 Far from the Madding Crowd (2015)
Plot: Bathsheba Everdene inherits a substantial estate from her uncle and tries her best to run it properly, mostly with the help of Gabriel Oak, a shepherd whose misfortune will bring her help and comfort. However, things will soon get more complicated than Bathsheba expected, especially when two different suitors arrive to the small village of Weatherbury.
Director: Thomas Vinterberg
Cast: Carey Mulligan, Matthias Schoenaerts, Michael Sheen, Tom Sturridge, Juno Temple.

The film is based on Thomas Hardy’s novel of the same name, and while I know it has been adapted into a film before, I haven’t watched the other adaptations, so I’ll stick with this one.

First of all, the film was very carefully shot. The director Thomas Vinterberg always made clear his intentions behind the camera and I think that’s one of the best qualities in a director and has also become very rare in the contemporary marketplace. The story is set in 19th century Dorset which helps Vinterberg place his personal stamp on the movie that is compelling and gripping.

The story revolves around the 20 (ish) young girl Bathsheba Everdene (Carey Mulligan) and her free state of mind and free spirit that eventually bring her to feel great pain and distress. Bathsheba likes to play with men’s feelings and soon finds herself three suitable men who all wish to marry her. Her strong-minded personality doesn’t fit the locals’ point of view, but she thinks she can deal with her problems alone and considers marriage as a social commitment rather than an act of love. The way Carey Mulligan portrays her is excellent; she’s a young and talented actress who makes Bathsheba seem a bit harsh and even heartless towards everyone – she seems to care for people at some point but I guess it’s way too late to show interest then. She’s witty, intelligent, independent, capable but also selfish, careless and cold. I think all these latter peculiarities made me hate her a bit or at list despise her as a character even if she does develop some more likable character traits in the end. Nevertheless, I profoundly admire Mulligan’s work not only in this film but also her career.

Then there’s Gabriel Oak (Matthias Schoenaerts) who is actually the opposite of Bathsheba and clearly has feelings for her. I must say that he was my favourite among all of the characters quite from the beginning: he’s loyal, honest, strong, and does or at least tries to always do the right thing. He stands by Bathsheba through everything and doesn’t take advantage of the situation that will soon develop in the story. Matthias Schoenaerts’ performance is one that proves him to be a capable and suitable actor for this role. He’s starred in a lot of films recently and his performances are never disappointing. If I had to choose among them right now I’d probably pick Bruno of Suite Française but that’s probably only because I enjoy war dramas more than periods.

Frank Troy (Tom Sturridge) on the other hand, is an immature young man whose heart has been hurt in the past and now he doesn’t seem to feel anything at all, but I won’t say more otherwise I might spoil the story for you. Sturridge is another talented actor, and he perfectly conveyed Troy’s feelings during the film, making you feel real sympathy for the character, and as a viewer who hasn’t read the book, I found this to be an unexpected but lovely surprise.

Maybe the most intriguing character was William Boldwood (Micheal Sheen). He’s is presented as an honest, wealthy and reliable man, but his loneliness eventually leads him to commit extreme acts. Boldwood was particularly interesting because he’s besotted with Bathsheba so much that all his life seems to revolve around her and he seems to depend on her approval. I think Micheal Sheen is one of the best talents in British cinema and we are always reminded of this in every role he plays.

As you may have recognised, the cast was fabulous and so was the director. The last thing but certainly not the least, was the music which was so beautiful and uplifting in every sense of the word. Celtic and Swiss traditions collide perfectly and choosing a different range of traditional music was a smart choice for this kind of film. On this note, Carey Mulligan and Michael Sheen’s duet of the traditional song ‘The Sprig of Thyme’ is not to be missed.

One thing that could be unlikable is that the film was a bit slow, maybe too much so. Second of all, the flashbacks weren’t as carefully handled as they should’ve been, since it’s never really clear as the story unfolds what happens to the characters, meaning that if you don’t know the novel it’s really hard to follow how the story unfolds and the seasons change. All seems to happen in a shorter time than it actually did, I know that films can’t possibly convey all the book in just an hour and a half but it wasn’t something pleasant for a viewer.

All in all, the film was really enjoyable. Like all Thomas Hardy novels it is twisted and difficult to completely grasp, but I think that’s the beauty of literature and of film-making too, of course, especially if the film is based on such an eventful story.

Vinterberg continues the long tradition of Danish cinema, and even though I haven’t watched his other films – so I’m basing my appreciation of his work on this film only – I still think he’s one you may want to keep an eye on.

I would certainly re-watch this film or recommend it because even though the plot is a bit complicated, it is still lovely and enjoyable in a various different ways.