“Well that’s good because I’m going to be a movie star.”

Hailing from one of the UK’s smallest cities, St Asaph in Northern Wales, Spencer Wilding always harboured dreams of being in the movies, but the road to success has never been easy, and Spencer has talked to us about how he went from small town Wales to the big screen.

Unlike most who find their way to Hollywood, Spencer had never had any acting lessons or professional training. Instead, he found his way into films via martial arts.

After starting boxing and kickboxing at the age of 25, Spencer went on to become the Welsh and British champion with 17 wins and 14 knock outs from 18 fights, but it was a chance encounter with the owner of a picture shop that set him on a path to the red carpet.

“I love making people happy, so when I became British and Welsh champion I went to a local picture shop to get some photos printed off for my Mum and my family to put on the mantelpiece. The owner was a man called Tony Scott Lee, father of Lisa Scott Lee from ‘Steps’. He rang me to say the photos were ready, and told me I looked good in the photos, and asked if I’d ever thought about being in films because he knew people who knew people who put sports stars in films.”

So, after meeting with the agency, Spencer was signed up and soon sent for an audition for Guy Ritchie’s 2000 film Snatch, but there was another obstacle in the way: dyslexia.

Having never had any acting lessons, everything Spencer knew was self taught and he admits that when it came to films he “had no idea how movies worked”. Upon reaching his audition Spencer recalls that everyone was excited to meet him and told him all he had to do was deliver his lines and the job was his, and then he was handed the script.

“It was like all my fears at once,” said Spencer who at the time struggled with things we all take for granted like filling in forms: “the first time I read it like a five year old would read Thomas the Tank Engine for the first time, so then the next try I overacted. I would love to see that audition, it must be on tape somewhere.”

“On the train home I just felt my dreams get crushed.”

A year later, after a series of unsuccessful auditions, Spencer had almost given up on his acting dream, deciding instead to stick with fighting, but a phone call from a friend changed that.

“Warner Brothers had been on the radio because they needed a really tall guy to play a werewolf in Harry Potter and the Prisoner of Azakaban. I hadn’t heard anything from the agency for nearly a year, so I rang them up to check I was still signed up with them because it wasn’t an open call and I needed to go through an agent. They called me back two minutes later very excited with an audition for the next day.”

Spencer describes walking into the studio as “feeling like a pair of welcoming arms around me”, and after an audition with 30-40 others, a call back with 20 others, and another call back with 8, the part was his.

Following his role in Harry Potter Spencer bounced from film to film (mostly action films) taking on a range of different roles from acting parts, to stunt doubles, including a part as Benicio Del Toro’s body double in The Wolfman (2010), saying: “97% of that was me”. 2011 and 2012 were also good years for Spencer who took roles in Green Lantern and Ghost Rider: Spirit of Vengeance, playing  Killawog and Grannik, respectively.

Having found his way into stunt work through his boxing background, Spencer describes stunt men and women as unsung heroes of cinema: “without stunt men there would be no films. They spend six years training in martial arts to get registered and become professional. And the Brits are best at it!”

Recently however, Spencer has chosen to stick with acting rather than stunts, and in 2013 landed a role in Green Street 3: Never Back Down playing Mason, head of the Milwall firm, arch enemies of the titular Green Street Elite. He describes having the same welcoming feeling in the studio working on Green Street 3 as he felt walking onto the set of Harry Potter, adding that he feels very privileged for the career he’s had: “I thank my Gods every day for this special path I’ve been on.”

Most recently Spencer has been seen as the mean guard in one of last year’s biggest blockbuster Guardians of the Galaxy and as Growler in Pan which was released last month. 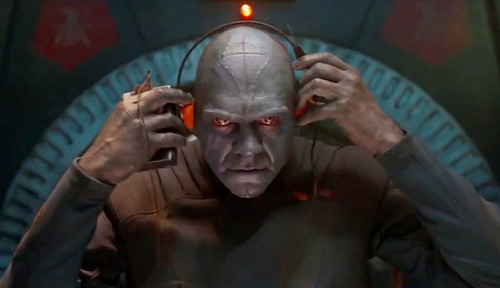 As well as action and adventure on the big screen, Spencer has also had a number of roles in adverts and commercials over the years, perhaps most memorably a role in Gatorade’s Super bowl advert in 2009. Quest for the Holy G was a parody of the Monty Python film Monty Python and the Holy Grail that played during the interval and included a dance off with dance troupe JabbaWockeeZ, and saw the famous white rabbit replaced with a white poodle.

On taking part in the first ever Whitby Sci Fi & Comic Con Spencer said, “I’m really looking forward to it and to meeting the Whitby family, it’s always like having a new family at every event.”

“I’m also doing the Q&A session, which should be good. Q&As are usually really good and I always enjoy doing them. You always get new questions you’ve not answered before.”

All profits from WSFCC will be going to Cancer Research UK, a charity very close to Spencer’s heart:

“I turned down a really big show to come to Whitby. This is a very important charity that’s very close to my heart. My Dad has cancer but he is on the mend, so it’s very important to me, as it is to lots of people. Almost every family is affected by cancer in some way, so it’s really important that it’s a success and makes a lot of money for a very worthwhile charity.”

And it’s not just any ‘big show’ that Spencer has turned down to join us on Saturday at WSFCC… it is the premiere of Paul McGuigan’s new film Victor Frankenstein starring James McAvoy and Daniel Radcliffe. Victor Frankenstein is released in the USA today, and in the UK on December 3rd, and Spencer plays the part of Nathaniel/Prometheus 2.

Whitby Sci Fi and Comic Con will also be the first time Spencer has performed a kickboxing demonstration at a comic con.

As well as being a huge supporter of Cancer Research UK, Spencer is also patron for I Spy Anti Bullying, a charity based in North Wales who help educate communities on bullying and dangers facing young people today, and help victims of bullying find ‘safe havens’ where they can go if they are worried.

He is also a patron of Change Step, who are a peer monitoring and advice charity supporting military veterans and their friends and families; helping them deal with PTSD and other psychological problems.

As someone who has quite literally fought his way to the top, Spencer has a message for everyone out there who is still trying, still working hard towards their goals:

“I just want to say to all the kids out there, never give up on your dreams. If you are hit with negativity then you’ve got to hit back with positivity. You’ve got to see it as a learning curve, always take something away and learn from it.”

Spencer will be at Whitby’s Spa Pavilion Complex this Saturday 29th November 2015, for Whitby Sci Fi & Comic Con, signing autographs and doing a Q&A session along with Chris Bunn and Phill Martin.

Spencer Wilding is signed up with Morello Cherry Actors Agency, based in Manchester.