47 Meters Down, the shark-infested seawater thriller that was a surprise box office hit this summer, amassing a worldwide gross of $53million, is to get a sequel titled 48 Meters Down and will feature the return of its production house as well as director-screenwriter Johannes Roberts. 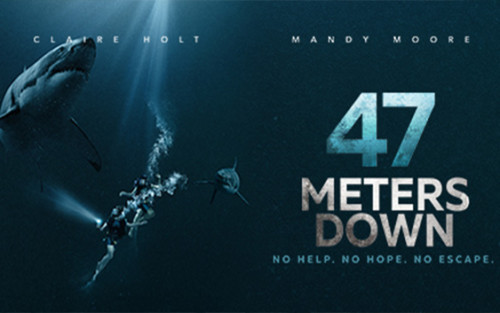 The original movie starring Mandy Moore, Matthew Modine and Claire Holt has been the most successful independent film in the United States in 2017, amassing $44million of its $53million worldwide total in the region, and it received favourable reviews across the board – including right here on The Film Magazine where Sophie Grant described it as “exciting and engaging” – encouraging rising British production house Fyzz Facility to invest in a second movie.

James Harris of Fyzz Facility had the following to say regarding the sequel:

“We are so pleased by the huge success of 47 Meters Down; it totally exceeded all expectations. 48 Meters Down will take the claustrophobia of cave diving and the thrill of shark encounters and move everything to the next level.”

48 Meters Down will move the action from the coast of Mexico to South America, and specifically Brazil, though no news has been released regarding casting.

Altitude Film Sales, who were in charge of sales on the original film, will again handle sales for its sequel, with the firm looking to find buyers at Toronto International Film Festival 2017 in the coming days. Altitude’s Mike Runagall released the following statement:

“47 Meters Down has captured the imagination of audiences worldwide, and we’re thrilled to be re-teaming with the filmmakers and our friends at The Fyzz for the sequel, which will ratchet up the thrills and spills to a whole new level.”

There has yet to be a release date announced for this feature.

Recommended for you: Why Is It So Hard to Make a Good Shark Film?