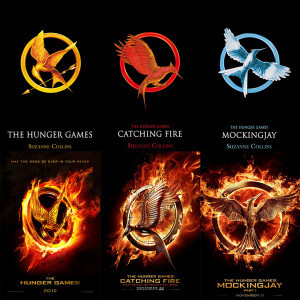 By now almost everyone is familiar with the story, or at least the concept, of The Hunger Games and it fits in well with the recent theme of dystopian novels and films that have dominated our screens and bookshelves over the past few years.

Since marketing began for the first film back in 2012, the media has been obsessed with “Team Peeta” vs “Team Gale” just as they obsessed over “Team Edward” and “Team Jacob” in the run up to the release of each film in the Twilight series. But, the screen writers and directors never gave into it, they kept the films true to the books, and they kept the films “Team Katniss”, paying little attention to the love triangle sub-story – the story that’s always all about Katniss saving her family and becoming the leader of the rebellion. As a consequence, Peeta and Gale’s unrequited love for her is simply a complication to be worked out at a later date.

Obviously, as with any adaptation, there are scenes and characters from the books that are left out of the films. Madge, for example, the mayor of District 12’s daughter and Katniss’s friend who gives her the Mockingjay pin before she leaves for the games, is not included in the films and instead Greasy Sae from The Hob gives Katniss her Mockingjay pin. In Catching Fire Katniss meets Bonnie and Twill out in the woods surrounding District 12, who are the first to inform her of the existence of District 13, but like Madge they are never shown on screen and the first time the audience (and Katniss) learn of District 13’s existence is when she is being transported there by hovercraft at the end of Catching Fire. The tributes’ time in the arenas is also condensed to just a few days in the films, whereas in the books they are in there for a couple of weeks.

While the series has been widely marketed as simply a series of young adult novels, with the media urging us to pick our side between Peeta and Gale rather than focusing on Katniss’s journey (just as The Capitol did), the wider effect this book and film series has had on society is undeniable. The words from Katniss’s message to President Snow in Mockingjay:

“Fire is catching, and if we burn, you burn with us”

were found painted on an archway in Ferguson, Missouri during the riots that followed the shooting of teenager Mike Brown by police officer Darren Wilson. Mockingjay also had screenings cancelled in Thailand after protesters against the country’s military leadership used the same three finger salute used as a symbol of unity of the residents of Panem against the Capitol. The same salute was used in Hong Kong by pro-democracy protesters last November during the occupation of Kowloon’s Mong Kok.

So, whilst undoubtedly there are better book-to-film adaptations out there, The Hunger Games trilogy will always remain one of my favourites not only for being very accurate in comparison to most adaptations but also for staying true to the message of the books. The films haven’t sold out the message and lessons of the books, and they have inspired people to fight back against oppression. They’ve portrayed Katniss as the strong character she is in the book – as a role model who fights for her family and friends – and she is someone young girls should look up to because of who she is and what she achieves, not just because she has two boys wanting to date her. I only hope that we are not left disappointed by the fourth and final film instalment in November.