When it comes to the subject of film, the word ‘underrated’ tends to find itself banded about a little too liberally, yet sometimes you just can’t help but notice that some deserving pictures aren’t getting their due. We’ve all been there; you see something that you enjoyed (maybe it even took you by surprise – always a welcome movie-going experience) but then you feel like the only person who even knows it exists. Conversations close with blank faces or the occasional ‘I might have heard of it’ shrug and soon enough you find yourself adopting the inadvertent mantle of ‘Champion for the Under-Appreciated’.

So let’s cast a spotlight on some of these gems and see if we can’t get a few more people talking.

Director Adam Wingard (You’re Next- 2011) brings us a neat blend of action, thriller and horror fuelled with a heavy injection of 80’s electronica that proves to be one hell of an entertaining ride. Dan Stevens stars as the eponymous ‘guest’, a soldier named David who shows up unexpectedly on the doorstep of the Peterson household with the claim that he was a friend of their son, who died in combat. He’s polite. He’s unassuming. He’s… wrong. Something is very off about David and it is the gradual reveal of his shady past that provides the lure of this movie. The whole thing hinges on Stevens, whose performance gives the film a magnetic and charismatic presence, supplemented well by a strong turn from co-star Maika Monroe, as teenage daughter to the family, Anna.

The Guest is slick and stylish but above all it is fun. There isn’t anything taxing here – it knows what it is and doesn’t get lost trying to prove a point- but as a throwback to 80’s B-Movie fluff, with homages to the likes of Halloween (1978) and Drive (2011), Wingard certainly delivers. 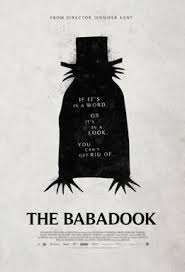 In this modern age of jump-scares and gore, it is refreshing to happen upon a horror film that does everything it can to steer clear of such pitfalls. The Babadook is the debut feature for Australian director Jennifer Kent, who tells the story of Amelia (Essie Davis), a widow struggling to cope raising her troubled six-year old son Samuel (Noah Wiseman). One night, Samuel asks his mother to read him a pop-up book he finds called Mister Babadook, though Amelia quickly becomes disturbed by the content. Mister Babadook is revealed to be a dark, supernatural entity that begins to torment whoever becomes aware of him.

This could have quite easily progressed as a monster movie but instead what we get is something much deeper; an exploration of grief and a chilling and somewhat poignant haunt into the more bleak psychological recesses of human nature. That might sound too heavy for a horror film but the way Kent handles it all ensures that this never becomes overwhelming and certainly does not detract from the true meaning behind this unsettling descent into darkness. Davis and Wiseman give superb performances, with characters that seem real and truly haunted in more ways than one. 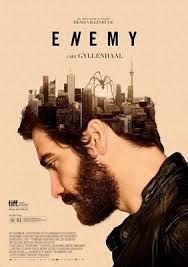 Now admittedly, this is a film that is not going to be for everyone and, as such, it is easier to understand why more people don’t talk about it. Having said that, for those that have not seen Enemy and enjoy films that promote discussions and theories, this picture comes highly recommended.

Enemy comes to us from director Denis Villeneuve (who also directed Prisoners (2013) – a masterful and gritty thriller that is also definitely worth a look) and stars Jake Gyllenhaal as a college professor who, after watching a film, becomes obsessed with finding an actor who bears his exact likeness. Simple right?

Warning: this film will put your brain to work. That’s not to say that Enemy isn’t entertaining but the film does not submit to a cohesive structure and does not lead its audience by the hand. Like The Babadook, this is another slow and eerie examination of psychological tension, a story of doppelgängers, chaos and… gulp… Spiders. The film is surreal, chock full of imagery (some subtle, some not so much) and metaphor that seek to twist your mind as you busily try to unravel just what the heck is going on. Ultimately, it serves as a gradual experience and likely something that you will piece together with repeat viewings, much akin to movies such as; Mulholland Drive (2001), Donnie Darko (2001), Under the Skin (2013) and Only God Forgives (2013).

It’s odd… unsettling… and nothing if not intriguing. 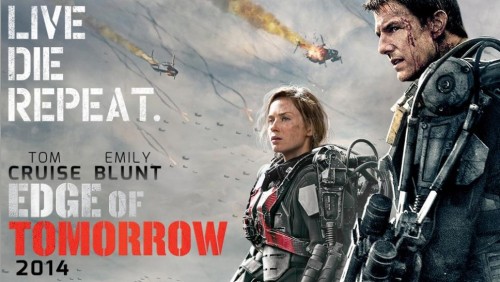 Wow… now here is an example of how NOT to market a film. The trailers looked like just another weak ‘by-the-numbers’ sci-fi flick, the promotional materials were uninspired to say the least and the film really didn’t do enough to distance itself with Tom Cruise’s last science-fiction outing from the previous year – the visually impressive but hollow Oblivion (to see this done right, check out Moon (2009)- a fantastically-executed low budget sci-fi gem).

My expectations going in were buried someplace deep beneath the earth.

I would like to issue an apology, to both director Doug Liman and Mr. Cruise who I am certain will be reading this: Gentlemen, I was wrong. Very, very wrong.

This movie was astonishing. It was packed with action, humour and a compelling sci-fi story that took the age-old ‘Humans on the brink of extinction’ plot and gave it a Groundhog Day twist. Cruise was brilliant playing against type as the cowardly Major William Cage who will do anything he can (even resorting to blackmail) to get out of serving on the front-lines in a war with an alien race known as Mimics. When Cage inevitably finds himself caught in the fray, he becomes infected with alien DNA which results in him reliving the same day over and over whenever he dies. That could easily get repetitive but the film does a good job of keeping things fresh and livening up the overall tone of the movie (which did well not to take itself too serious). Cage then meets up with Sergeant Rita Vrataski played by a consistently excellent Emily Blunt – the only other person that this has happened to who somehow managed to break the cycle – and the two set off to find a way to beat this alien invasion.

As well as film, I am also a fan of video games, but know all too well the scarcity of decent game-to-film adaptations. Whilst this is not based on a game (it actually originates from a Japanese light-novel called ‘All You Need Is Kill’ – a much better title if you ask me) the style and setup do very much replicate the feel of one. The death/restart theme uncannily matches the mood of a video game, especially as the two characters are forced to strategise and memorise the battlefield to ensure their survival. In a way, this might be about as close as we get to putting that atmosphere up on the big screen (big hopes for the Warcraft movie, though). The action scenes are well executed, without the dependence on too much shaky-cam preventing us from following what’s happening, the humour hits when it should and the whole thing looks spectacular (the beach battle is a constant thrill to return to).

This is a film accessible to anyone, stripped of the usual sci-fi mumbo-jumbo (for those people who find that sort of setup off-putting) and an exciting two hours that sadly passed most by on it’s short theatrical run.

Martin Webster
My name is Martin and I'm addicted to film. This obsession has taken me from vast, fantastical vistas to frantic pulse-pounding space battles; from the personal to the epic and everything in-between. That's why I love film so much and, though I sometimes regret it, I will give anything a try.
My favourite films are: The Shawshank Redemption, The Empire Strikes Back and The Dark Knight Returns.
Latest posts by Martin Webster (see all)