A few days ago, the internet went crazy over Tim Burton ‘confirming’ Beetlejuice 2 and the returns of Winona Ryder and Michael Keaton in this sequel. As reported by one of ShowBizSpy’s “spies”, an official comment from Burton said the following : “The film is a go and has been approved by the Warner Bros. team. We have talked with the cast members we wanted for the film and they are all on board, this includes both Winona and Michael. We have the script in hand, everything is in place, all we need to do now is get ready to start filming.” 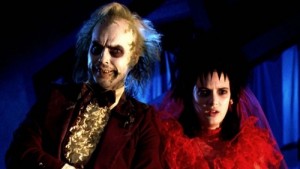 Unfortunately, Beetlejuice fans, we have to break your hearts!

The staff working at Warner Bros with Tim Burton asked ShowBizSpy to publish the following official comment on the “confirmed Beetlejuice 2 movie”:

“Tim Burton did not confirm Beetlejuice 2 as the movie is not in development. Tim’s focus is entirely on Miss Preegrine’s Home For Peculiar Children set for a September 30 2016 release and developing Dumbo“

But, as Winona Ryder confirmed on The Late Night Show in August, we can still keep our fingers crossed and hope for Warner Bros to officially confirm a sequel in the future… Keep your eyes peeled and don’t (always) believe the hype!