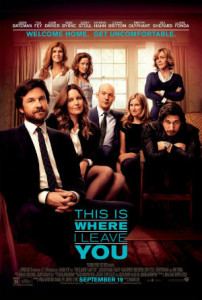 This Is Where I Leave You (2014)
Director: Shawn Levy
Starring: Jason Bateman, Tina Fey, Corey Stoll, Adam Driver, Jane Fonda, Rose Byrne, Kathryn Hahn, Connie Britton, Timothy Olyphant, Abigail Spencer, Dax Shepard
Plot: After the death of their father, four siblings are drawn back to their hometown to reflect on what their lives have become.

Be warned: A stellar cast is not always a pre-requisite for critical acclaim especially when fronted by Shawn Levy, a director who has made a name for himself in the more uninspiring section on the comedy shelf (Night at the Museum, Cheaper by the Dozen, Pink Panther).

Despite bringing together 21st century comedy messrs Fey and Bateman amongst stellar dramatic actors Corey Stoll, Adam Driver, and Rose Byrne, unfortunately This Is Where I Leave You plays out more like a made-for-TV sitcom than a full-bodied comedic drama. It is simply not nearly cinematic enough and its meandering pace would play well week-by-week but falls short over the 100 minute mark. However, this is not to say the film isn’t enjoyable as it certainly has its moments. Besides, its relaxed pacing makes it easily watchable like the film equivalent of one of those singer-songwriter albums sold with an extra-large caramel mocha Frappuccino at Starbucks.

Judd Altman (played by Jason Bateman as the middle child uncannily like his character Michael Bluth in the rip-roaring TV classic ‘Arrested Development’) is going through a divorce as well as mourning his late father’s passing. Judd, his three siblings and their mother ‘sit’ Shiva, a week-long Jewish tradition in commemoration of their father, bringing the family back together again and highlighting the individual problems in each of their lives.

It is the basis of most successful US sitcoms of the past 30 years; with a distinctly dysfunctional family group becoming increasingly at odds with each other despite the love they share deep down (Malcolm in the middle, Arrested Development, Everybody loves Raymond – even when the group is made up of friends the story will still play on this dynamic, best evidenced by the superlative Seinfeld).

For the most part the acting is sufficient but no fireworks are involved, as everyone seems content to coast through the film on autopilot. Corey Stoll, the first seasons’ standout performer in Netflix’s House of Cards, is given a thankless task playing the dull and insecure elder brother, and he fades into the background in many scenes while younger brother and nomadic playboy, Adam Driver, runs rings around him. Driver’s performance is nowhere close to a tour de force but he brings a great deal of life, zest and energy to the film. While much of the film focuses on Jason Bateman’s character, matriarch Jane Fonda is the real star of the show courtesy of a breezy matter of fact and highly sexualised demeanour that provides many a cringe-inducing moment for her children and a subtle humour that provides most of the film’s laughs.

Apart from Fonda, the whole cast has made a name for themselves in TV, which seems the most suitable format for this sort of piece. The acting is strong and efficient but in a movie can come across as a little pedestrian. Despite helming one of the greatest sitcoms of the 21st century, it still remains to be seen whether Bateman is a true Hollywood A-lister. All the star talent in the world does not necessarily translate from TV to film, just ask Jennifer Aniston. It takes a greater sort of charisma, so powerful that it can bring everything within the proceedings into that star’s orbit. Bateman is watchable and indeed talented, but his straight man shtick wears thin after anything longer than half an hour.

This isn’t to say that the film doesn’t work on some levels. The charisma between the siblings is quite endearing and the film evokes a rather pleasant, melancholic if weakly drawn reflection on life’s tribulations. The characters may be quite flimsy but they are likeable nonetheless with each role filling a specific cliché that appeases the film viewer’s expectations. Despite being filled with warmth, ‘This Is Where I Leave You’ suffers from a lack of true cinematic ambition and vision.

Follow me
Ricky Jones
Budding journalist and recent politics graduate, I have a soft spot for anything made by the late great Alfred Hitchcock and more embarrassingly so - Disney. Expect adjectives and metaphors aplenty.
Follow me
Latest posts by Ricky Jones (see all)