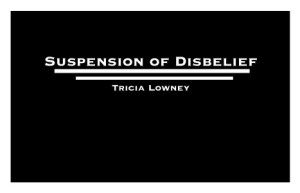 The Most Important Concept in Film

The cinematic universe as a whole is amazing. People die and come back to life, the world has ended thirty times over, magic and super powers and legends all exist and may even exist together. How is this possible, though? Why don’t movie audiences walk out when they see something clearly false or impossible on the big screen? Three simple words: suspension of disbelief.

According to dictionary.com, the definition of the phrase is: “a willingness to suspend one’s critical faculties and believe the unbelievable; sacrifice of realism and logic for the sake of enjoyment”. Basically, it means the audience accepts what’s on the screen as real for enjoyment’s sake. It’s because of this concept that movie making can be used as an art form and expression of creativity. In fact, it may be the most important concept in film today.

It’s worth noting that, firstly, this idea is not one that is simply embraced by movie goers but also by content creators. If it wasn’t so universal, how would directors and writers like Alfred Hitchcock, Christopher Nolan, and M. Night Shyamalan feel confident enough to want to share their work? No one would believe in Hitchcock’s birds attacking humans or Shyamalan’s major plot twist in “The Sixth Sense”, for example. There certainly wouldn’t be such a general acceptance of Batman (or really any superhero or super-villain for that matter). In order for films like these to be made, the crew behind the scenes must believe that what they are making is true and relatable, too, and they must take strides to achieve the same suspension of disbelief with their audience.

How can someone relate to a man who’s able to fly? Or how about a time traveler? See, that’s the key. While both the audience and crew must accept the impossible for films to work, the films themselves must also be able to relate to larger, more abstract issues. For example, Tim can travel into his past in “About Time”, but the movie isn’t solely about his ability. It also calls into question humanity and how the choices we make can affect the rest of our lives. It combines the impossible with the omnipresent. This idea doesn’t always work however, and when it doesn’t, it usually leads to a critical and financial flop. These are times in which the audience’s suspension of disbelief is stretched too far. Consider “Jack and Jill,” starring Adam Sandler, which is 3% on Rotten Tomatos and 23% on Metacritic. The movie seems like a fun play on a children’s rhyme at first glance. However, its execution is too hard to believe. The over the top and unrealistic “comedy” pushes the mind’s limits but Sandler playing both Jack and Jill (and being pursued by Al Pachino) is far too much for the viewer to accept. It wasn’t believable or relatable and thus, it was widely disliked.

Suspension of disbelief is the idea on which film history and artistic film hinges. Without this concept the world would never know entire cinematic universes such as the Marvel universe, the D.C.U., the Disney or Pixar universes. Without the audience’s willingness to participate, film may not have even been successful. Yes, the willingness is partially due to viewers wanting a fun escape from their lives, but suspension of disbelief takes that a step further: it allows for the audience to be immersed in whatever films they are watching and it allows for them to be mentally and emotionally affected by what they view. This is why it just may be the most important concept in motion-pictures today.

Zack Snyder Film ‘Rebel Moon’ to Be Released by Netflix