This article was written exclusively for The Film Magazine by Gillian MacLeod.

For many, the past decade or more of their cinematic experience has been dominated by the superhero film. Starting at humble beginnings with Superman: The Movie in 1978, the genre has since developed, and exploded into the multi-billion-dollar industry it is known as today.

Like other genres before it, the superhero genre has followed a distinct pattern in its lifetime that boasts different life stages. These phases have been mapped out as various genre milestones have been accomplished. However, all good things must come to an end, and there is key evidence to suggest that this may be sooner than some may hope. 2019 was a peak year for the genre which reached milestones of impossible heights that may never be achieved again. 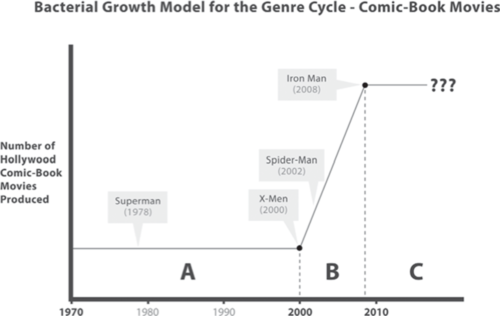 In his book “The Comic Book Film Adaptation: Exploring Modern Hollywood’s Leading Genre”, author Liam Burke maps out the superhero genre cycle based on four distinct phases: the formative, classical, revisionist, and parody phases. These phases are characterized by genre growth. Between 1978 and 2000, the genre experienced its formative stage in which studios experimented with the “superhero formula”. The genre was in the process of forming itself; studios were trying to find common genre tropes and conventions that made the genre successful. When they cracked the code in 2000 with X-Men, the genre entered the classical period in which the production of superhero films increased. Popular tropes had been established and occurred again and again. Heroes would struggle with dual identity, living two lives at once. They would valiantly rescue the damsel in distress. But, both of these popular tropes would be upended in 2008 with the arrival of the revisionist stage.

There is no doubt amongst superhero genre fans of the significance of the year 2008. Two huge films burst onto the scene: Iron Man and The Dark Knight. Each were successful in their own right, breaking box office and academy award records alike. But, an even more important signifier that the genre had reached its peak at that time was the number of superhero films released that year: ten. Many film theorists looked to this as the beginning of the end, but, really, it was only the beginning. At the time that The Dark Knight cracked the one-billion-dollar mark at the worldwide box office, it was only the sixth film to have ever done so. Today, this is a regular accomplishment. And while the number of superhero films released did drop the following year, it remained consistent throughout the following decade.

In 2019, the genre had yet another record-breaking year. Eleven superhero films were released. Avengers: Endgame became the highest grossing film of all time and Joaquin Phoenix won the genre’s first leading role Oscar for Best Actor. The genre had peaked yet again, but, a peak is not always a promising sign. As the genre raises the bar for success it makes it increasingly difficult to repeat that success. It is highly unlikely that the genre can break its own nearly three-billion-dollar box office record, especially considering the circumstances in which it achieved that record in the first place. It was a culmination of over a decade’s worth of superhero films in a shared universe that led to this conclusion. Furthermore, Avengers: Endgame provides a clear definitive ending for the genre in which audiences can choose to jump ship. In what way could the future of the genre produce a more successful accomplishment than that?

Another signal of change is Todd Phillips’ Joker, also released in 2019. “The whole pitch was low-budget comic-book films that are deep-dive character studies, that don’t have a ton of CGI and people aren’t going to fly in them. Just grounded, realistic films” says Phillips on the film concept. This film signifies a conscious change in direction, one that mirrors the gritty realism of The Dark Knight before it. While it is possible that this could inspire a new cycle, this phase would be starting fresh and re-articulating new superhero genre expectations. It would take years for it to, once again, gain traction. The low-budget approach lacks confidence in the future of the industry as it provides a better buffer for poorer returns. Additionally, over-the-top special effects are regarded as a genre staple. As with The Dark Knight, many questioned whether Joker should be considered a superhero film at all. Regardless of whether Joker inspires a new trend in the superhero genre or not, it is clearly the passing of the torch from one phase to the next.

Following the impact of the global pandemic, only six superhero genre films remain scheduled to be released in 2020, including two that have managed to do so as of this writing: Birds of Prey and Bloodshot. It is safe to say that the genre is, unsurprisingly, not off to a good start in the aftermath of the success of the previous year. However, the slate of scheduled superhero films still extends well into the uncertain future. Many of these, such as Morbius and The Eternals, feature stories and characters that are brand new to the silver screen. With no clear extended cinematic universe or previous film connected to these films to obligate audiences into theatres, these features may end up being riskier than studios hope.

Regardless of what the future may hold, the current cycle has made the superhero genre one of the most successful in Hollywood history. While all good things must come to an end, it is fairly safe to assume that the genre will be back again in due time with a fresh approach.

You can find out more about Gillian MacLeod at the following link: