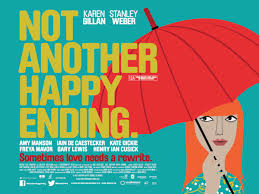 In this short piece, I’ll give you an overview of Not another Happy Ending, a fresh Scottish comedy starring Karen Gillan as the female lead. The story is set in Glasgow and it follows Karen Gillan as the lovely and naive Jane Lockhart who is an aspiring writer whose novel has been endlessly rejected by many publishers. Just when she seems to have hit rock bottom, she meets a struggling French editor named Tom Duvall (Stanley Weber), who agrees to publish her work. From this moment on, Jane’s life suddenly seems to be changing for the best as she also finds love in Willie Scott. But, things aren’t as they appear and when Jane finds herself stuck while writing the ending to her second book, she must decide which direction her life will take.

I must say the film was quite an enjoyable Scottish comedy, full of irony and wit. Karen Gillan has a lovely face and is therefore perfect for the role, and the chemistry between her and Simon Weber cannot be ignored.

I think that the importance of the film lies in the development of Jane’s relationship not only with Tom but also with her father, who she hasn’t seen for a long time. They have a strained relationship for reasons that are later explained in the movie and while I shan’t share more than that in case you want to view the movie, I would suggest that if you’re interested in movies about family issues with a happily ever after, and a touch of wit, I’d suggest you see this film.

There were two scenes in particular that I felt captured the essence of the movie particularly well and were of a very high quality. The first took place in a pub quiz about literature which shows, undoubtedly, the progress of Jane and her father’s relationship, and also shows Tom’s sadness and loneliness in some way. Secondly, all the scenes with Tom and Jane are really enjoyable. As I’ve already emphasised, their chemistry makes every scene interesting. I also liked the character of Roddy (Iain De Caestecker) – Tom’s friend – because he’s such fun and his approach to Freya Mavor’s character Nicola Bell is presented as both amusing and quite sweet.

I think it’s safe to say that this film is a good quality comedy – the only major fault I found with it was the slow development of the story that made the film seemingly drag for small periods of time – and, in the end, it’s certainly a film I’d recommend to you for its quality of production and the chemistry of its characters.