In a previous piece of mine entitled ‘The Hobbit: Taking an Unexpected Journey Into One of My Favourite Film Franchises’ I commended and heralded one of my most beloved franchises ‘The Hobbit’ (Peter Jackson), noting how incredible Jackson’s work is and how the franchise is a credit to the fantasy genre, thus inspiring me to create another piece centred on this genre specifically. This article, however, focuses upon an aspect which is detrimental to the overall success of the protagonist’s journey – the villain – an archetype that is utilised throughout genres across the film spectrum, an aspect which disrupts the plot equilibrium thus creating an action-laden storyline that is both interesting and enthralling overall. In honour of the archetype, I have comprised three of my favourite film felons from the fantasy genre that I think are most prominent, vindictive and villainous. 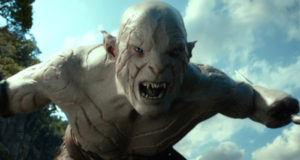 Azog the Defiler (Manu Bennett) is the primary antagonist in Jackson’s visual interpretation of the ‘Hobbit’ series and is a character that plays a crucial role in the plotline throughout the series of films. Azog, the ‘head orc’, adheres to the traditional villain archetype; he is ferociously frightening to say the least. The character’s goal is to defeat the opposition (protagonist Thorin and his allies), which is presented in the third installment (The Battle of the Five Armies, 2014) where Azog and Thorin commence a duel that is intense to watch, as one is rooting for the hero.

Azog’s presence as an archetypal villain creates suspense, thus making the film a thrilling piece to watch, initiating dramatic elements in the process. Azog’s final scene with Thorin was very well Orc-hestrated (ahem) overall, showcasing the antagonist as a vicious villain. Azog’s villainous status is truly cemented in ‘The Battle of the Five Armies’ as the character battles with and kills several of the treasured heroes of the story (I won’t reveal who just in case anyone has not seen the Hobbit films) which is archetypal of a ‘villain’. However, in this piece, it seems more menacing as the audience becomes attached to the ‘good guys’ and when the villain takes this notion away from the viewer, they become more hateful of the character, Azog in this case, thus categorising the mythical orc as one of the most despicable and therefore best fantasy film felons overall.

The White Witch (Tilda Swinton) also adheres to the archetype of the villain, most prominently in the film adaptation of the book ‘The Chronicles of Narnia: The Lion, the Witch and the Wardrobe’ (2005), where the character carries out treacherous acts towards the lovable beings of Narnia such as the lively and kind-hearted Mr Tumnus (James McAvoy). whom she turns into stone. Jadis’s menacing persona is more prominent than Azog’s due to the fact that she is ‘human’ as opposed to a mthycal being – one expects the character to possess empathy – as this aspect makes us quintessentially ‘human’, so to speak. Tilda Swinton’s portrayal of the evil enchantress is most effective; she plays the role of the villain perfectly with such precision, enrapturing the renowned archetype in the process. Jadis’s true treachery is showcased in a particular scene in ‘Narnia: The Lion the Witch and the Wardrobe’ (2005), where the character, along with several allegiants (including ogres, which in fairy tales and folklore have been stereotyped as being villainous) antagonise the hero of the tale, Aslan, on a stone table, torturing and humiliating him before finally sacrificing him – all the while Lucy (Georgie Henley) and Susan Pevensie (Anna Popplewell) are watching tearfully from a distance. It is notable that Jadis showed compassion towards one of the protagonists, Edmund Pevensie (Skandar Keyes), but it was a mere façade utilised to lure in Edmund and gain his trust simply for her own gain, thus implementing her villainous status even further. This creates more hatred towards Swinton’s character, where the viewer becomes bitter towards the villain in greater depth – thus making Jadis one of the most villainous characters in the list thus far. 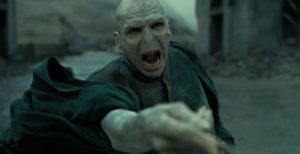 Last but not least is the iconic and probably most renowned out of all the fantasy film villains, Lord Voldemort (Ralph Fiennes -in the Deathly Hallows films). From the outset, the audience is introduced to the villainous ways of the antagonist (also referred to as ‘he who must not be named’) when he murders Harry Potter’s parents in the first installment of the ‘Harry Potter’ film franchise, ‘The Philosopher’s Stone’ (2001).Voldemort, much like Jadis and Azog, has an army of followers who support his sinister ways – the villain in most narratives could not prosper without this and it is a notion that is apparent within many narrative structures. The character of Voldemort’s most sinister moment occurred in the final installment of the ‘Harry Potter’ film series ‘The Deathly Hallows: Part Two’ (2011) during the Battle of Hogwarts when Voldemort announces the supposed ‘death’ of the main protagonist, Harry Potter, whilst laughing amongst his peers in the most menacing manner, which, in turn, highlights the dark lord’s villainous status and thus cements his place in the top three list of the ultimate fantasy film felons, as the audience are rooting for the main protagonist (Harry Potter) and when their beloved character is temporarily ‘defeated’, thus making the antagonist even more despicable, Voldemort reaches an entirely new level.

This has been a short list that I comprised of my top fantasy film felons – Azog the Defiler, Jadis the White Witch and Lord Voldemort – villains who are some of the most menacing yet entertaining characters that currently reside in the fantasy film genre.