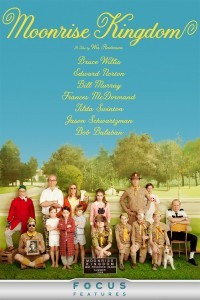 In recent years, quirky and more artistic films such as “The Grand Budapest Hotel” and “Moonrise Kingdom” have been rising in popularity in mainstream media. The characters are typically more artistic and unique. They push the boundaries of accepted character archetypes while exploring new, disjointed plot lines. It sounds messy but it’s actually all very clean and visually interesting.

“Moonrise Kingdom” follows two troubled children, Jared Gilman as Sam Shakusky and Kara Hayward as Suzy Bishop, who’ve run away from their respective homes in search of a better life in the wilderness. The entire film is poignant and concise, every sentence feels necessary. The colors and shot types are reminiscent of early color, classic movies, and the score was deliberate. All of these elements make for a unique and interesting movie.

Though it’s not realistic, “Moonrise Kingdom” is strangely relatable. It evokes a sense of sad nostalgia and examines young love through a honey-colored lens. Every scene in this movie has some sense of melancholy in it; in the dialogue and the voices of the actors, as well as in their honesty. It’s often hard to find films in which everything is so straightforward. It’s very clear that director Wes Anderson and his co-screenwriter, Roman Coppola, didn’t want the audience to guess what their characters were thinking. For example, there is a great scene in which Mr. and Mrs. Bishop, played by Bill Murray and Frances McDormand, are discussing their marriage and their children. Mrs. Bishop tells her husband to stop feeling sorry for himself because they (as parents) are all that their children have. Mr. Bishop responds, very bluntly, that it is not enough.

Now, I may be partial because I am a Bill Murray fan, but he was a stand out character in this film. All around, the acting was very impressive, but Murray stepped out of his typical comedic-style to portray a more thoughtful and particularly upset man. Murray’s character visibly struggles with his daughter’s behavior and the fact that he’s unable to connect with her. The actor perfectly captured the essence of a man trying so hard to do the right thing in spite of a world that seems to be against him. His wild desperation mixed with the wittiness of the script is not only fun to watch but also intriguing.

In contrast to Murray’s character, Frances McDormand’s Mrs. Bishop lacked depth. She was supposed to be bland and cold, and she was both those things, but she was also disinterested in everything happening around her. McDormand went overboard in her portrayal of Mrs. Bishop. Yes, she was slightly more upset than usual when her daughter ran off, but she remained almost wholly dispassionate even during exceedingly dramatic scenes. Instead of seeming numb to the world around her, like she was written, Mrs. Bishop was practically robotic throughout the course of the film.

While most characters in the movie powerfully affected the audience, any and all of them would not have had such a strong effect without the musical score. Award-winning French film composer Alexandre Desplat handled the selection for “Moonrise Kingdom” and it is clear in his work that he understands how important musical scores are in the film industry. He chose home-style songs, powerful symphonies and orchestral pieces that played on the emotions of the viewers without overpowering the script.

Another interesting aspect of this film, aside from its music, was Anderson and Coppola’s choice to use a narrator. He is a peculiar little man, played by Bob Balaban, who lives in the same area as and interacts briefly with the film’s other characters. Seeing him on screen, I was reminded of the musical “Into the Woods”, which uses a very similar narration style. It was a fun twist allowed for comedic breathing room in an otherwise quite intense script.

This is not your classic “feel good” film that you’d watch solely for enjoyment. Instead, it makes you think. It asks important questions about mental illness and broken homes in a way that’s not often represented in media today. Most of the characters are dynamic and interesting and the way the viewer is thrust into the midst of the storyline from the opening credits is thoroughly engaging. Because of all this, I give the film an…