The Jungle Book (2016)
Director: Jon Favreau
Starring: Neel Sethi, Bill Murray, Lupita Nyong’o, Ben Kingsley, Idris Elba, Christopher Walken, Scarlett Johansson & Giancarlo Esposito.
Plot: A live action Disney film based on both the classic collection of books which, in conjunction with its animated predecessor, centres around the life of Mowgli (Neel Sethi), a ‘man cub’ raised by a pack of wolves in the jungle, who is forced to escape his homeland in order to avoid the wrath of the villainous tiger Shere Khan (Idris Elba). Aided by his jungle allies Bagheera (Ben Kingsley) and Baloo (Bill Murray), Mowgli finds a way to defeat Shere Khan and restore the equilibrium to the jungle once again. 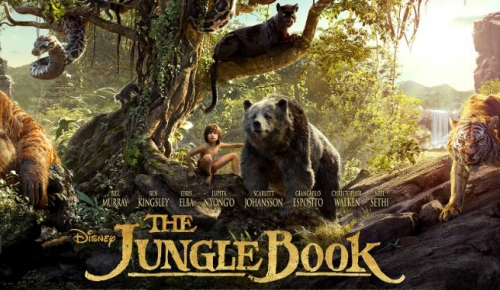 The ‘Jungle Book’ (2016), directed by Jon Faveau, is a film which portrays a lot of the elements of the animated version, but with a twist –  extracting the cartoon animals and humans and replacing them with ‘real-life’ versions of the original cast. I had previously seen ‘Cinderella’ (2015) directed by Kenneth Branagh, another live-action Disney film, and I was thoroughly in awe of its visual essence in addition to its musical presence. It was a wonderfully orchestrated piece and thus I had high expectations of Favreau’s ode to the 1967 animated version of the ‘Jungle Book’.

One would state that Favreau’s adaptation of the ‘Jungle Book’ is visually astounding to say the least; it almost feels as though one is ‘in the jungle’ – due to the use of special effects that accurately emulate the ‘real-life’ environment – thus making the film an experience in conjunction with it being an entertainment product. I did, however, expect this movie to be monumental and aesthetically encapsulating as it is part of Disney, a corporation with a creative division that has a track record of producing excellent films, many of which I grew up with via their famous animated releases such as the ‘original’ version of this movie. Importantly with regard to my own fandom and that of millions of others who have grown up with the original characters in their lives, Favreau has successfully managed to transform the iconic characters into realistic representations of the actual animals themselves, though the performances have also been key in this respect.

Bill Murray’s narration as Baloo the beloved bear was both humorous and heart-warming – the character’s original qualities were sewn into this modern piece beautifully, most prominently through Baloo’s love of honey and all things edible. a matter that was covered via the monologue of the character in an admirably amusing manner, something which importantly provides the audience with a sense of comic relief which detracts from the ongoing threat from Shere Khan (Idris Elba), the matter of which the plot is tailored around. But Murray isn’t the only important performer as the film itself features voices from other talented actors and actresses including Idris Elba, Christopher Walken, Lupita Nyong’o and Ben Kingsley. Kingsley plays Bagheera the panther who, along with Baloo, guards Mowgli (Neel Sethi) from his big cat foe. The film features the contrast between certain pairings such as Baloo and Bagheera – where the panther’s serious and wise nature reflects that of Baloo’s bashful, easy-going personality, which is rather humorous to see, and effective, as both characters play important roles in guiding Mowgli through his journey throughout the film.

In this regard, there was another character bond which touched my heart greatly and that was that of Mowgli and his adoptive wolf mother Raksha (Lupita Nyong’o), who was distraught over Mowgli’s absence once he had departed the home in which she had raised him from as a ‘cub’. It was beautiful to see how despite having cubs of her own, Raksha integrated Mowgli with the pack and saw him as her own son, ignoring criticism for it from the other jungle creatures, including Shere Khan, who became bitter towards ‘mankind’ after being burnt in the face by Mowgli’s birth father. Nyong’o’s narration of the wolf mother was beautiful as she managed to audibly present elements of the character’s fear, love and protectiveness, matters that added to the character’s mothering nature and helped to create an empathy for her situation.

The Jungle Book (2016) does follow the traditional storyline, despite featuring changes which may not be linked specifically with the plot itself, ones with which the audience will be able to identify (upon watching the film – no spoilers here). One of these alterations involves King Louie (Christopher Walken) who was presented as a Gigantopithecus as opposed to an orangutan. However, the Gigantopithecus was once native to the jungle area in which Rudyard Kipling based the original story in, whilst the orangutan was not, something I had not known this prior to conducting initial research into Favreau’s film in order to complete this review. This therefore added a sense of historical accuracy into the live-action adaptation and it was therefore an interesting and understandable change to that of the original story/movie.

Moreover, the live-action adaptation included the most iconic numbers from the original animated version – ‘I Wanna Be Like You’ sang by King Louie (Walken), and ‘Bare Necessities’. I was thrilled that Favreau decided to include these tracks within this piece, as I had previously enjoyed the songs in the animated film and once the music started to play, it reignited fond childhood memories of when I used to sing along to the classic compositions. It wouldn’t feel like a Disney film if the traditional music was excluded, would it?

Overall, Favreau’s ‘Jungle Book’ was a wonderful visual journey, and despite its darker tone – brought about largely by the scary nature of ‘live characters’ as opposed to animated ones – I would definitely recommend this version of the story to fellow Disney fans, not least because of how the classic story that captured the hearts of Disney fans (such as myself) triumphs in reinventing the animated version in which many have adored from a young age by including the classic songs ‘I Wanna Be Like You’ and ‘Bare Necessities’ alongside breath-taking special effects, and a talented cast of voices (including the only live-action actor Neel Sethi who played Mowgli).

I am in awe of Disney’s live-action films thus far and I cannot wait for ‘Beauty and the Beast’ to be released next year.