The remake of Halloween (1978), which was announced by the original movie’s director John Carpenter as been scheduled for release on October 19th 2018, has named Danny McBride and David Gordon Green as its writer-director duo.

The filmmakers, who are more often associated with the comedy genre due to their collaboration in making films such as Pineapple Express (2008) and Your Highness (2011), will co-write the remake with David Gordon Green directing the project.

Gordon Green’s latest ventures as a director have seen him move into more dramatic fields with the star-studded Our Brand Is Crisis (2015) being his latest release following the critical successes of Prince Avalanche (2013) and Joe (2013/14), while McBride has focused more heavily on his acting career with an appearance in the upcoming Ridley Scott Alien sequel Alien: Covenant set to boost his popularity in the coming months.

McBride, who was the producer on each of Gordon Green’s movies after their collaboration as director-actor on Pineapple Express, recently co-wrote TV’s ‘Vice Principles’ (2016-17) and has written two films set for release in 2017.

John Carpenter made the announcement on his official Facebook page: 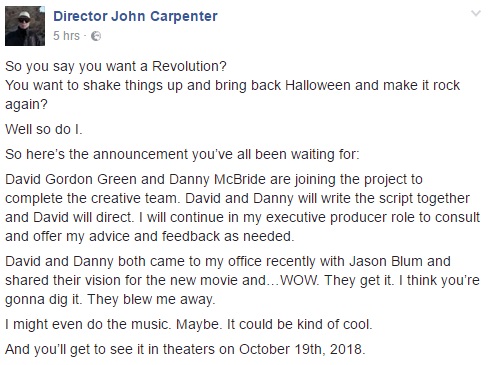