The Motion Picture Association of America (MPAA) has today, 21st March 2019, released a report detailing the 2018 calendar year in terms of box office receipts, audiences and more. In the report, the MPAA revealed that 2018 was the most successful year for the global box office in history.

Worldwide ticket sales grossed a total of $41.9billion in 2018, a 1% increase on the previous record set by the box office in 2017. A large part of this equation was the largest ever North American total of $11.9billion in overall earnings, which was up 7%.

The MPAA released the following image to illustrate this rise: 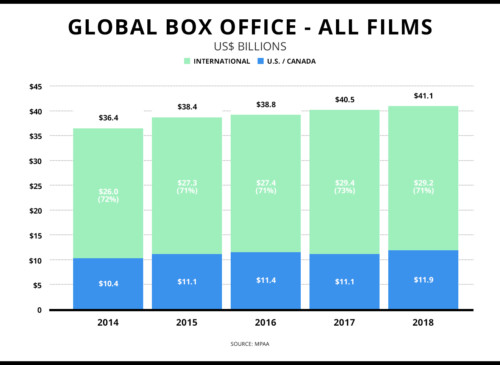 In total, the box office outside of North America was actually down on the previous year, though by less than 1%. The MPAA report that this is likely due to currency fluctuations and is no need for concern, and with the major box office success of Chinese films in 2019, the international market doesn’t seem likely to remain stagnant in 2019.

2018’s overall increase comes in a year when mid-budget ($30-60million) movies once again came to the fore, with A Star Is Born and Bohemian Rhapsody offering strong outings in North America and the wider world. The highest grossing movie of the year was Avengers: Infinity War with an overall gross of $2.05billion – the fourth highest of all time.

For more details on the overall performance of entertainment in 2018, including more in-depth figures on the worldwide box office and the audiences that went to see the films, please access the MPAA 2018 Theme Report.