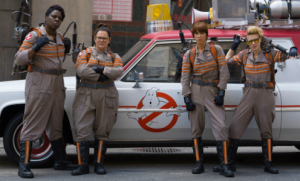 The first trailer for Paul Feig’s “Ghostbusters” has finally arrived and we are already sensing greatness courtesy of its all-female cast including Melissa McCarthy, Kristen Wiig, Leslie Jones and Kate McKinnon.

As the movie will be released in the UK and US on July 15th, director Paul Feig already said that the movie will feature some cameos from original actors of the franchise like Sigourney Weaver, Bill Murray and of course Ernie Hudson. Facing some pretty harsh comments on the 100% female team of the movie, Feig commented saying that it was “vile, misogynist shit”.

From watching this very intense trailer, we can feel some great vibes coming up… somehow like laughing gas rushing through our lungs.