Christian Cooke’s sombre short film about an ageing man’s confrontation with great personal loss is a terrifically well orchestrated collection of talented people hitting the ball out of the park with their contributions across the board, and is an emotionally stirring 15 minutes of cinema that has enough about it to move even the most hardened of film goers.

Edith opens with a technically commendable swooping shot of its subject Jake (Mullan) sat alone in a British pub and maintains this sense of individual focus for most of the film’s remaining minutes. It’s a constructive decision that showcases the easy to follow yet quietly intricate and honest screenplay provided by Ray Robinson, and vitally rests much of the emotional journey upon the shoulders of the central character’s supremely talented performer, Peter Mullan.

Mullan has had a notably successful career with credits in the likes of Braveheart (1995), Trainspotting (1996) and War Horse (2011) to his name, and the actor carried all of that experience and know-how into his role in Edith. His performance as Jake is one that carries a seasoned quality and powerful subtlety that is focused upon so successfully by the camera choices of the picture’s cinematographer and director that it transforms the narrative at several stages and is the emotional driving force of the entire film. His work offers his character’s outwardly hardened personality a forceful sense of vulnerability that helps to establish him as somebody worth routing for even before the narrative reveals reasons to do so, and is vitally gifted the room to do this by a limited amount of dialogue as much of the story is told through reaction, secondary character interaction and flashbacks.

It is in the trust the filmmakers have in Mullan to portray the emotions they wished for him to portray that the real skill of the crew comes to light. One such an example is the movie’s most emotionally challenging moment, upon which the second act hinges, whereby Mullan’s quiet and abrupt character Jake has the following interaction with his deceased wife (of whom he is imagining is sat next to him on the sofa):

Edith: “Are you alright?”

This was a vital moment in the character’s trying task to overcome his grief and was evidence of the collaborative success the film truly showcased. In this one moment, the screenwriter provided the picture with a brief glint of joy only to take it away with three simple words, bringing the message of the film right back into focus, while the director rested those words upon the face of his star and awaited a change in expression and attitude that was delivered with sensational aplomb. In one 10-15 second sequence, the roles of actor, director and screenwriter were highlighted for their fantastic work and the effect was utterly breathtaking. 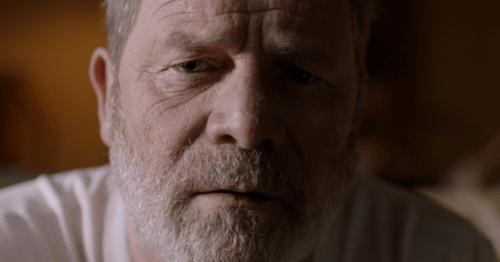 Visually, Edith was very strong too. The washed out colour pallets illustrated the attitude of the film’s central character and the setting of the snowy Northumberland countryside was one that afforded the movie a magical quality that aided its use of flashbacks and worked with them to further reinforce the cold blankness of Jake’s recent journey. Throughout the picture there wasn’t a single frame out of place nor were there technical issues of any sort, and the work of the costume and casting departments must also be commended for their work on casting and dressing the younger versions of the protagonist and his lover as their resemblance to their aged counterparts was entirely believable and the costumes worked strongly to provide information on the characters; a vital contribution within such limited time constraints.

Edith was also scored with real skill by Richard J Birkin whose work was used to heighten moments of emotion and provide an effective cue to the flashback scenes yet was never invasive or even unwelcome. The picture’s closing song, “Don’t Look Down” by Tom Hughes, also seemed like the perfect choice, with its melancholic tone matching much of the film’s score and its lyrics being relatable to the character’s journey.

Christian Cooke’s 2016 short film is, then, a rather excellent collaborative effort from which a truly moving story has been produced and thus my only negative comments can be that the film may not be to your tastes if melancholia isn’t your thing and, given the simplicity of the character study at the heart of the project’s underlying narrative, that there isn’t anything groundbreaking about Edith either. However, given its genre and subject manner, it is considerably difficult to offer such criticisms for it is entirely unexpected for such a picture to be judged by such terms and thus I can only commend all involved with Edith for making a truly moving short film that is indisputably one of the best short films we’ve ever encountered on this website.

This was the directorial debut of Christian Cooke whose acting credits include Cemetery Junction, Hello Carter and The Art of More. The film was produced by Mini Productions and Mint Pictures.

You can support everyone involved in the making of Edith at the following links: