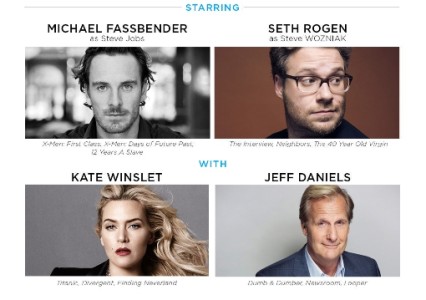 Steve Jobs is brought back to life once again as Danny Boyle returns to close the London Film Festival for the third time (previously with Slumdog Millionaire, 2008 and 127 Hours, 2010) with the UK premiere of Steve Jobs at the Odeon Leicester Square on the 18th October. The script by Aaron Sorkin (The Social Network, 2010 and Moneyball, 2011) based on the biographical novel of the same name by Walter Isaacson, sees Michael Fassbender star as Jobs, with Kate Winslet as Macintosh marketing chief Joanna Hoffman, Seth Rogan as Apple co-founder Steve Wozniak, Jeff Daniels as Apple CEO John Sculley and Katherine Waterston as Chrisann Brennan, Jobs’ high school girlfriend and original member of staff at Apple.

Painting an intimate portrait of one of the men at the epicentre of the digital revolution, Steve Jobs takes us behind the scenes of three incredibly significant product launches for Apple: the Macintosh in 1984, the NeXT Cube in 1988 and the iMac in 1998. Set at a rapid pace the film switches between Job’s professional and private spheres, examining the demands on him at these crucial and defining moments in his career, and how it affected his relationships with those around him. As well as exploring what it takes to create change in the modern age, what it takes to change the way we as human beings interact with each other, and examining the brilliance and intelligence as well as quirks and insecurities of one the most transformative figures of our time. 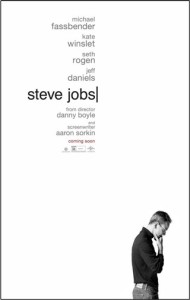